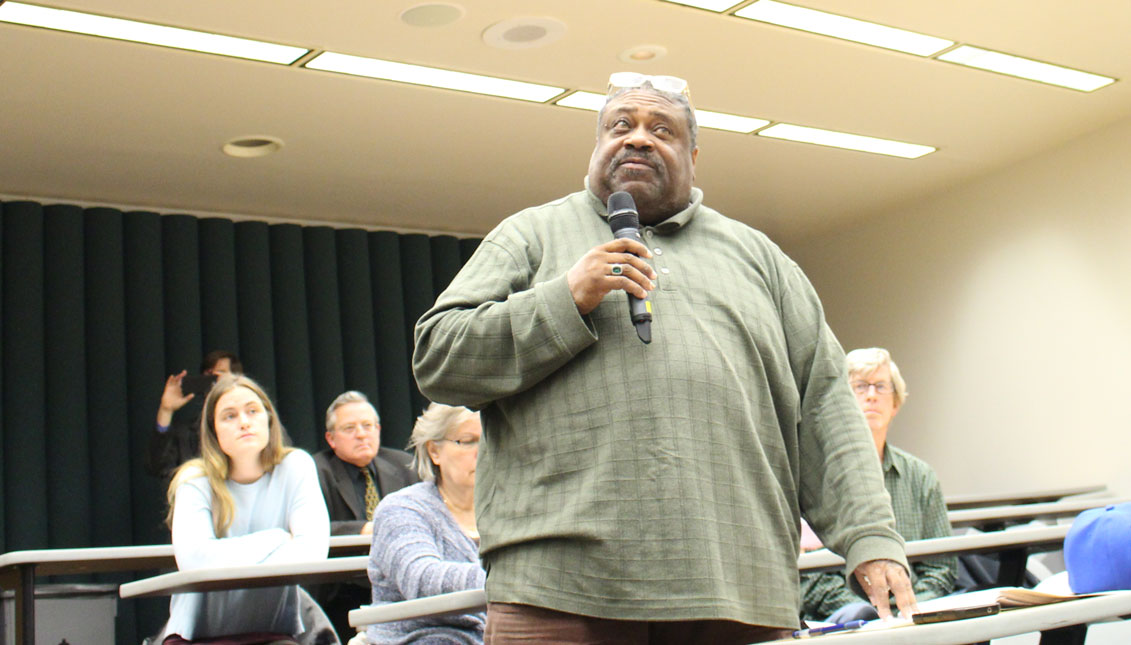 The image of Michael Miller, 22, “shooting up” appeared on screen at the University of the Sciences in West Philadelphia Thursday night. Part of a longer project developed by NBC 10, the 10 minute video entitled “Generation Addicted” showcased the danger, the hurt and confusion felt when using heroin.

The showing was part of Councilman David Oh’s planned community meetings around different parts of the city regarding the heroin and opioid crisis. The first of the meetings was held last month at Northeast High School. The goal is to get input from 75 to 100 people in different areas of the city. Oh will use the input from the public to develop a strategy at City Hall to fight the drug crisis.

Different community organizations were in attendance, offering information about themselves but also ways that they try to fight issues like drug use. The Mural Arts Program, for example, has public paint days, where aside from being able to paint they also offer HIV testing and needle exchanges.

Oh added that it appeared to him that a lot of misinformation exists in the city regarding where people can go to get services dealing with their addictions.

He said that his team is going to work to address the issue of drug addiction politically for those who are not only addicted, but also their families while educating the public to prevent younger people from getting involved in the addiction as well.

“We have a way of dealing with drug addiction from our social services to our law enforcement, to our court and prison system,” Oh said.  “And the question that arises is, is that the best? Is that the most intelligent and the most sustainable manner that we could address this problem?”

There are communities, Oh added, that might not show up at community meetings that are trying to focus on the ongoing issue of drug use. However, there are those who will show up and be very supportive, unless someone comes to open a drug rehabilitation center in their neighborhood.

“I’m a product of being brought up in the 60s and 70s, so I see the face of this epidemic has changed,” Mark Harrell, Southwest CDC community organizer, said. “I remember that one of the things that were profound for me were the prevention efforts that took place. So as I look at the changing face of this epidemic it’s clear to me that prevention is going to be really vital with the future of Philadelphia.”

The ongoing issue of the opioid addiction is also taking center stage at the state level. Governor Wolf continued his state tour of roundtable discussions focused on discussing the opioid epidemic last week. The event, held at the Governor’s Residence, was attended by members of the his cabinet, local officials, law enforcement, health care professionals, emergency responders and community members.

“Fighting Pennsylvania’s opioid and heroin epidemic is a top priority for my administration,” Wolf said in a press release. “The community leaders here today work diligently every day to ensure that Pennsylvania leads the nation in the fight to combat the opioid abuse and heroin use crisis. This panel is an opportunity to discuss how we can work more collaboratively with the folks on the ground of this crisis.”

Wolf hopes that these roundtable discussions will lead to a larger bipartisan conversation between state and local officials on how best to confront opioid abuse.

Oh’s last meeting before a City Council hearing on the crisis, scheduled to be held on May 20, will be this Thursday in South Philadelphia at the Palumbo Recreation Center.