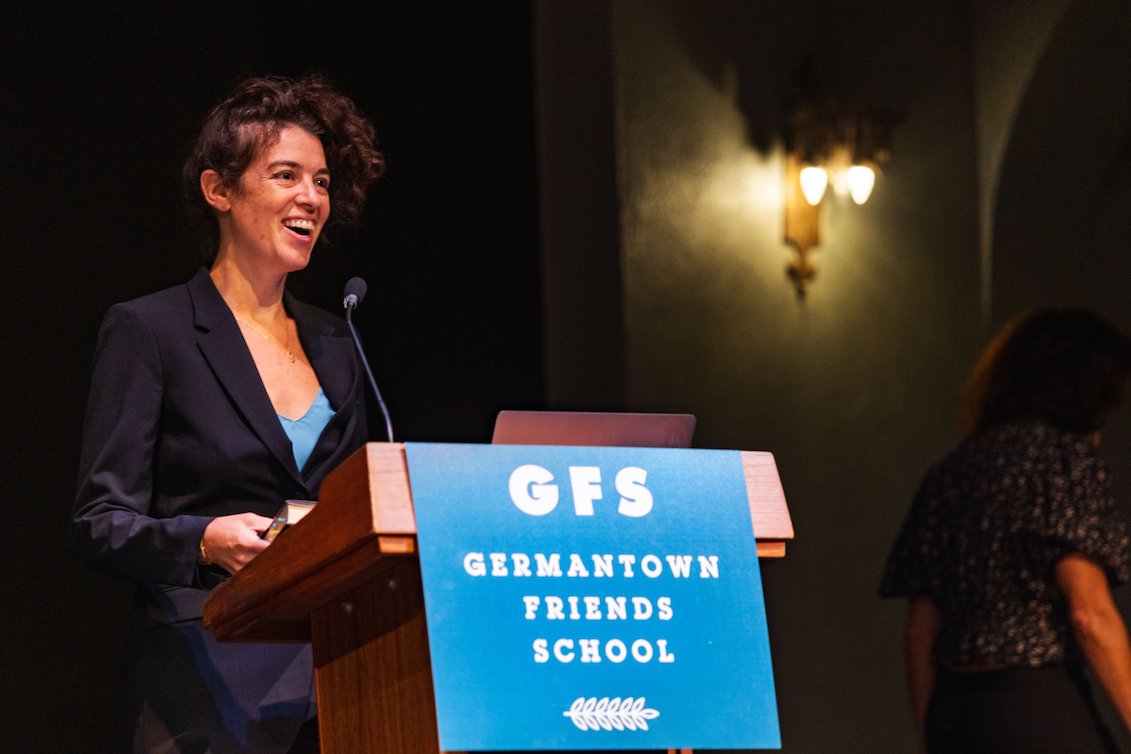 The In the Heights and My Broken Language writer visited the school last week to share stories and more with students.

Quiara Alegría Hudes is a Pulitzer Prize-winning American playwright, author, and essayist who also works on musicals and films.

Last week, on Thursday, Oct. 21, the writer visited the Germantown Friends School (GFS) in Philly to bestow knowledge and stories upon an audience of over 100 students.

The Germantown Friends School is an independent coeducational PreK-12 school.

Hudes’ was born and raised in West Philadelphia. Her upbringing and experiences in early life influence her stories, and influenced her decision to pursue the arts.

A self-proclaimed “barrio feminist,” Hudes’ contributions are sizable and noteworthy.

On Thursday morning, Hudes shared stories with GFS students regarding her Puerto Rican upbringing, her family, her experiences in the arts, and creating as a living.

The writer acted as keynote speaker for the Germantown Friday School’s ‘Diversity Dialogue Day.’ The author took the lead and opened up candidly about many topics.

Hudes discussed her early developments as a writer, and how her interest in storytelling was first sparked during after school hours spent at her father’s restaurant and bar, where she would listen in on conversations.

Along the same lines, Hudes walked students through her experiences in college, her first productions to be put on stage, up to more recent projects such as Vivo, a 2021 film she scripted.

Some focal points were also placed on Hudes’ musical Miss You Like Hell and the play The Happiest Song Plays Last.

In discussing family and her work as a writer, Hudes posed the question, “What does a great American writer look like?”

Throughout her life, Hudes has met many great writers who were also family.

One developmental moment for Hudes was the incarceration of a younger cousin. This event led to the creation of Emancipated Stories, explained the writer.

After this event, she began exchanging letters with her cousin. As Hudes’ concerns over growing prison systems expanded, she created Emancipated Stories to connect incarcerated people with readers.

Through conversations with her cousin, Hudes learned of a deep desire amongst incarcerated people to communicate more with those outside, describing it as a desire to “feel human” after being stripped of certain rights.

Emancipated Stories brings forth the writing of many people: juvenile and older people; men, women and trans people.

The speaking duo sheds light on how, within filmmaking, there are stigmas surrounding casting practices and what a Latinx person may look like: a key focal point for the duo.

Similar to Hudes’ message of what a great American writer may look like, The Latinx Casting Manifesto supports the PSA that there are no concrete definitions for Latinx culture and the characteristics that compose a Latinx person.

“People bring their own music, voices, to their roles,” said Hudes.

This fits with an opening question of what a main character looks like, the answer being potentially anyone.

To wrap up her lessons, Hudes touched on the work that goes into creative outlets, and explained that to “make it” as a writer, all one must do is simply write.

The author described the 15-year writing experience of In the Heights, and other behind-the-scenes tips on play-making and choreography.

Hudes left students with an important sentiment, that it is more than okay to “do more than one thing.” In fact, Hudes suggests it.

To be an artist, an individual does not need to relegate themselves to only one form of artistic expression.