She may be going into office as one of the youngest, but Gilmore Richardson has a wealth of experience in city government to bring to the table.

If you ask new at-large Councilmember Katherine Gilmore Richardson about her neighborhood of Wynnefield, her eyes light up at the prospect of talking about home.

Outside of college, the neighborhood in West Philly is the only place Gilmore Richardson has ever called home.

She was brought to Wynnefield by James and Lorraine Jenkins Gilmore, who adopted her from the hospital after being born to a South Philly teen.

The Wynnefield of Gilmore Richardson’s childhood was a predominantly black, working-class neighborhood. For her, it’s “a wonderful place to raise your family in.”

“You knew your neighbor next door. You could leave your door unlocked when I was growing up,” said Gilmore Richardson.

Not only that, the community boasts some of the biggest names in Philly politics as residents — such as former mayors W. Wilson Goode Sr. and Michael Nutter — and a rich history led by activist, Katie B. Jackson.

When Wynnefield started to shift from a Jewish-American to black neighborhood in the mid-1960s, Jackson stood on the forefront of that change. In addition to founding her own pre-K school, which she called Wynnefield Academy, Jackson also bought an old cinema and turned it into an event space for the community.

“We have a lot of star power,” said Gilmore Richardson.

Beyond the big players, she also remembers a lot of teachers, firefighters, police officers and other community servants making up a majority of Wynnefield residents.

Outside of the neighborhood, her parents were also both heavily involved at their church in North Philly. Gilmore Richardson can remember going for what felt like “seven days a week” during her childhood.

“Everything for them was church,” she said, referring to her mom and dad.

When she wasn’t there, Gilmore Richardson was learning at some of the best educational institutions offered in Philadelphia.

In pre-K she attended the aforementioned Wynnefield Academy before going to Samuel Gompers Elementary School.

After that, Gilmore Richardson went to middle school at the ultra-competitive Julie R. Masterman and followed it up by attending the educational mecca that is the Philadelphia High School for Girls.

Inspired by her parents’ involvement in many grassroots movements at church and spurred organically by the surrounding neighborhood activism, Gilmore Richardson got involved early in various political and community-based campaigns.

At a young age, she remembers going to all of the community meetings at the Wynnefield Residents’ Association.

Not long after attending her first meeting, Gilmore Richardson recalled when nearby St. Joe’s University began expanding further into the community.

“The house where we grew up, we now share a property line with St. Joe’s,” she said.

Given that distinction, the house became a common meeting place at the time between university representatives and neighbors on the block.

“That was like my initial activism,” said Gilmore Richardson.

At the time, Gilmore Richardson was a junior at the Philadelphia High School for Girls and at-large City Council rep Blondell Reynolds Brown was just elected to her first term in office.

The new councilmember-elect was visiting the school to meet the students and tell them a little about herself, career and impending work at City Hall.

“She was the oldest of seven, and her mother taught her to have gumption and she loved working on behalf of the people of Philadelphia,” said Gilmore Richardson. “And I  thought her story was really, really intriguing.”

Reynolds Brown struck such a chord in the young Gilmore Richardson that the junior in high school wrote her a letter and hand-delivered it to the councilmember-elect’s house.

“I knew where she lived because every year she would have like, huge events in our community,” said Gilmore Richardson.

She didn’t know it then, but Gilmore Richardson had just made a connection that would define a large part of the next 20 years of her life.

Reynolds Brown responded well to the young teen who showed the same gumption of her own young self.

The interactions started small, with Gilmore Richardson receiving letters from the councilmember at graduations and other major life milestones.

Throughout college, she also volunteered for Reynolds Brown’s campaigns and her “Women Making a Difference” events, which celebrated and uplifted women doing impactful work in their communities.

In 2006, while in graduate school at West Chester University, Gilmore Richardson was Reynolds Brown’s graduate intern. 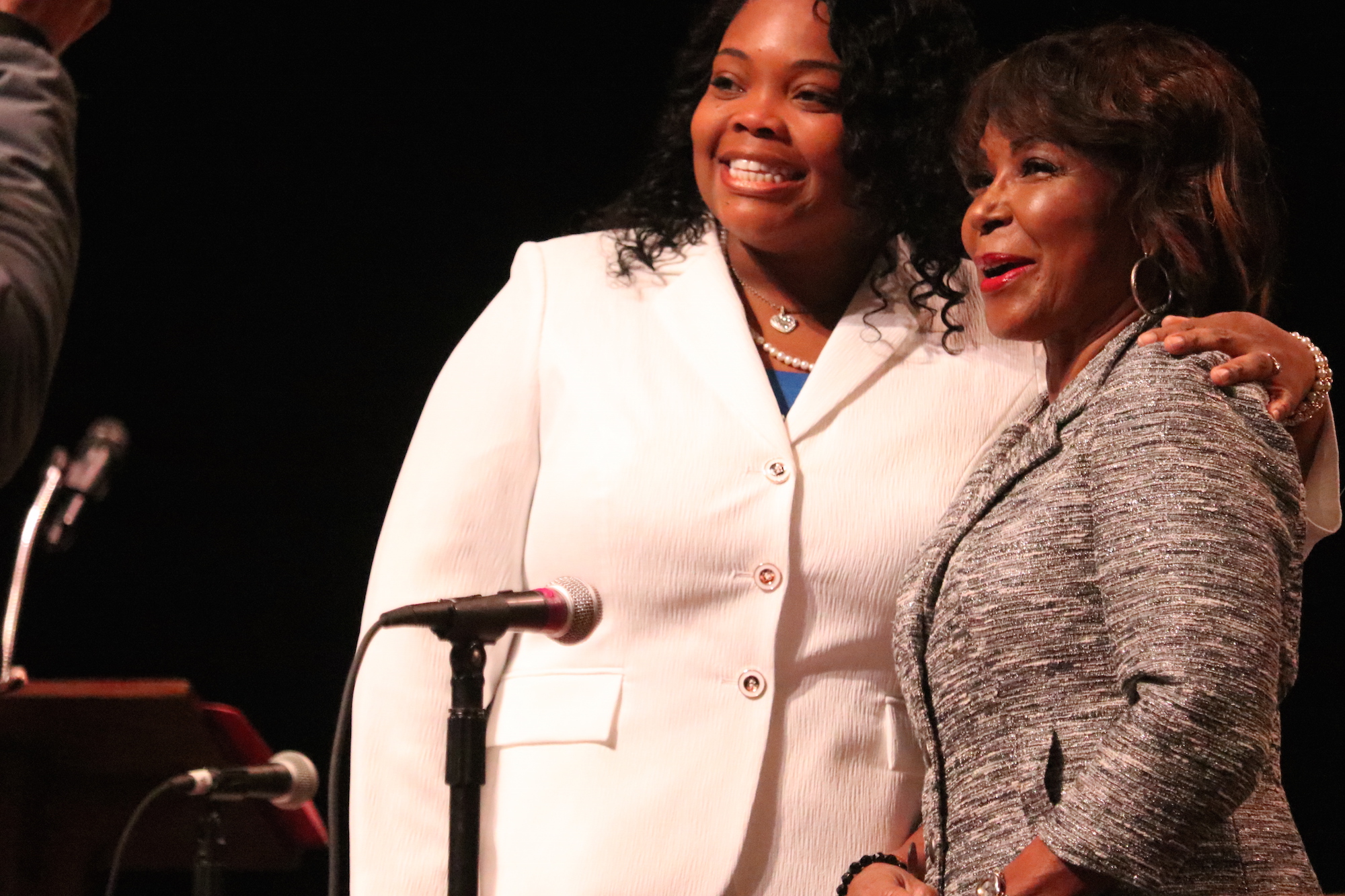 “I would go out to people’s homes, deliver their recycle buckets, ensure they had clean and seal, organize community clean ups, and work with the local community on any quality of life issues they had,” said Gilmore Richardson.

After that, she became a legislative aide.

In that role she was in charge of again, interacting with the community, but in a more strategic way towards getting legislation passed in City Council.

It also gave her an inside look at the process of government that is often frustrating and hidden from public view.

“From the introduction of legislation, to the hearing phase, to passage out of committee, to first reading in a council session, to second reading and final passage and any and everything in between,” said Gilmore Richardson.

Confused? Gilmore Richardson admits it took her “three good years” to get comfortable with the process.

“You’re always learning and you never know it all,” she said.

During that time, Gilmore Richardson played a role in passing legislation regarding the city’s environmental policies, funding the school district, supporting residents’ nutrition and streamlining some of Philly’s governmental services among other things.

“I think that was my most challenging position,” she said.

After that, Gilmore Richardson found herself as Reynolds Brown’s Chief of Staff.

Throughout it all, she still says she’s learned the most from the recipient of the letter she wrote as a junior in high school.

For Gilmore Richardson, Reynolds Brown taught her how to work hard, be gracious, build consensus and overall, be of service to Philadelphia.

On her visit to AL DÍA, she remembered Reynolds Brown putting it a little differently.

“She would always say, ‘I am walking on a tight-rope backwards, blindfolded, with high-heels on, trying to get it right,” said Gilmore Richardson.

With that experience in tow, Gilmore Richardson said she had thought about running for office over the years, but wanted to wait “for the right time.”

“I quickly found out, it’s never the right time,” she said. “You have to strike while the iron is hot.”

That opportunity came when her mentor announced her plans to step down after her fifth term. Two weeks later and after 11 years in city government, Gilmore Richardson resigned and announced her candidacy for an at-large member of City Council.

She entered the race late relative to other candidates in a large field, but won the fifth and final at-large Democratic spot in the May 2019 primary.

It meant Gilmore Richardson’s name would appear on the ballot in November, and because there are five spots open for at-large Democrats, she was practically a shoo-in in the general election.

With the triumph, she became the youngest black woman ever elected to Philadelphia City Council.

“I think it’s really important because our city has changed demographically. We have a large amount of millennials in the city of Philadelphia and I think it’s good for us to have representation as a part of our legislative body of government,” said Gilmore Richardson. “Change is always good.” 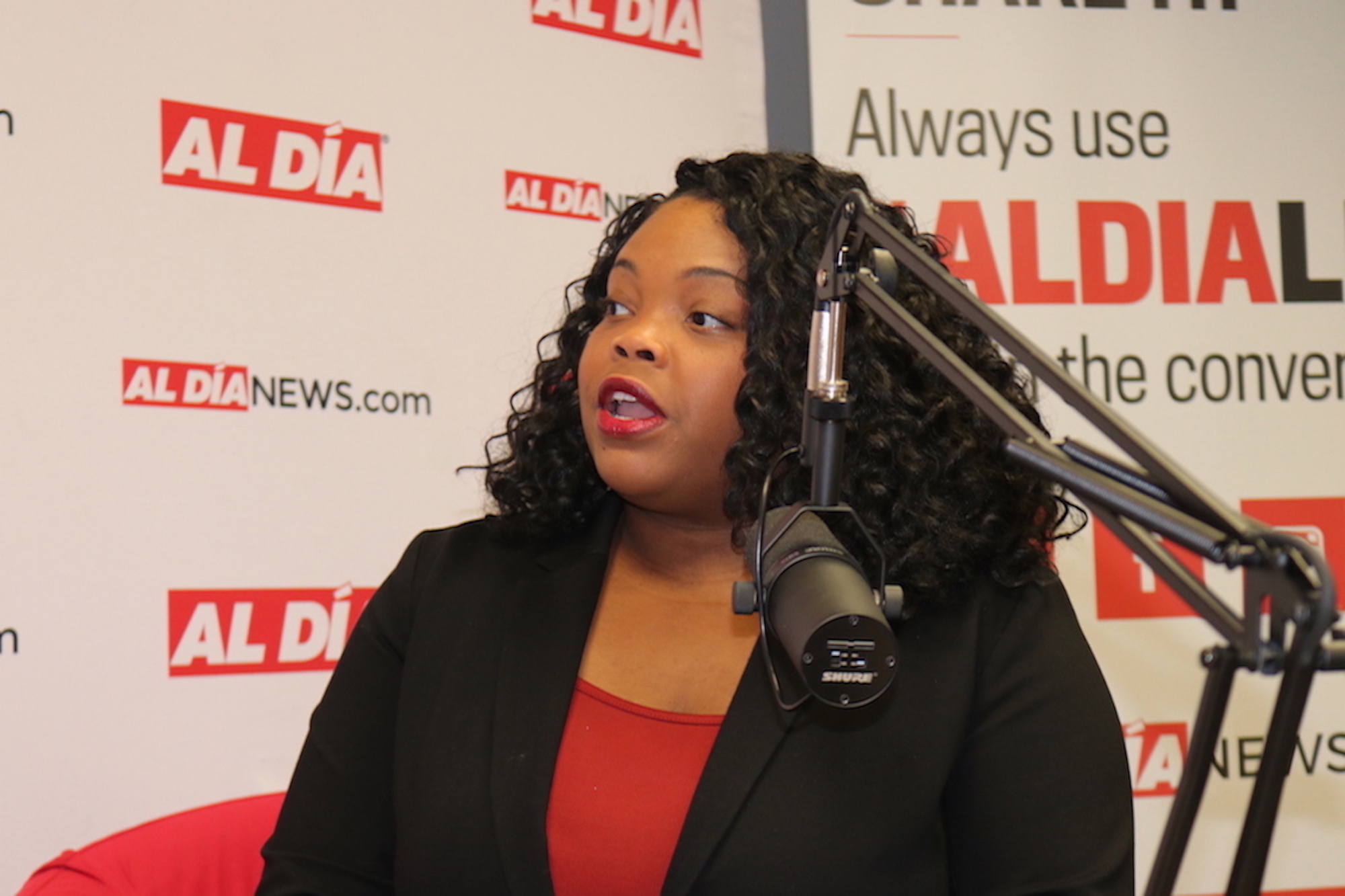 Speaking of change, Gilmore Richardson has her eyes set squarely on one issue at the root of all the city’s problems as she transitions to being an at-large Councilmember.

“The first, second and third issue is poverty, and everything falls under that,” she said.

To combat it, Gilmore Richardson is drawing on her own foundation of a quality education to find solutions and opportunities for Philadelphia youth.

She attended some of the city’s most prestigious institutions in middle and high school, but before she got involved in city government, Gilmore Richardson was a substitute teacher at Overbrook High School for two years after college.

Her time there was arguably as impactful as her experience before, but for giving her the opportunity to see the other side of Philadelphia’s education spectrum.

Gilmore Richardson admits to seeing things in her classroom at Overbrook that she had never seen before and remembers visiting students’ houses and buying them school uniforms when they couldn’t afford them.

In one instance, she found out a student couldn’t stay awake in her class because he would go out at night to protect his mother as she bought drugs on the street.

“That was so moving to me,” said Gilmore Richardson. “I know, as someone adopted at birth, it’s so easy for someone to fall into the systems around us and not have a chance, or an opportunity for a better life expectancy.”

Gilmore Richardson discovered at Overbrook, that not everyone who goes to high school in the city will go to college, but that doesn’t mean they don’t deserve to be prepared.

“They should be college or career-ready at graduation,” she said.

Putting more funding into the city’s trade schools is one way Gilmore Richardson plans to make them more accessible for the youth that don’t go college.

She also plans to encourage more collaboration between Philly’s School District and its corporate, nonprofit and government sectors to create more opportunities for sustainable employment out of high school.

“We know that our recent job growth has been around low-wage jobs. We have to ensure that we can increase the amount of people working in higher-wage positions,” said Gilmore Richardson. “How we do that is by providing them with the skills needed to serve in those roles.”

Another way to spur job growth in the city that Gilmore Richardson plans to pursue is providing more investment for small businesses across Philadelphia, especially those that are minority-run.

“There could be as low as only 2.5% of the businesses in our city are minority-run,” said Gilmore Richardson.

In her view, the situation is improved by reviewing the various city offices that interact with the micro and small businesses that do city work to make sure they’re getting paid on time for their services.

“One prolonged payment for a microbusiness could be detrimental to their entire business model and therefore, their longevity in our city,” said Gilmore Richardson.

On Jan. 6, 2020, Gilmore Richardson was sworn in for her first term as a new at-large councilmember.