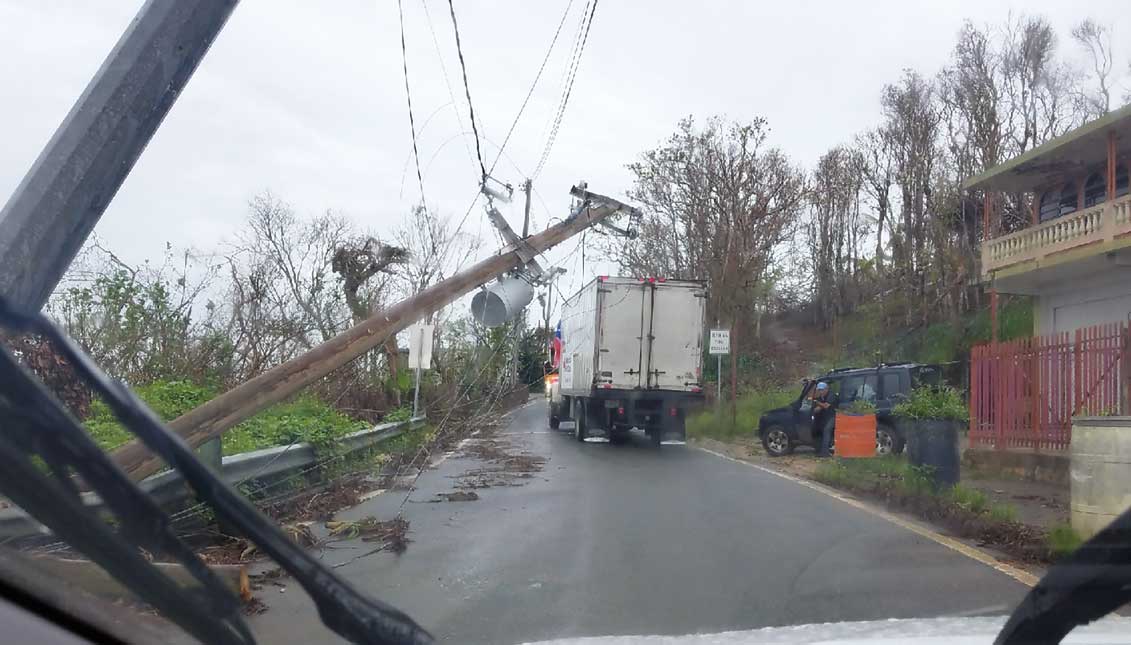 Bastone, an Inspector in Philadelphia’s Sheriff’s Department, has seen devastation beyond his imagination and living conditions that are heart breaking. Particular Fle

This story appeared in the November 8, 2017 issue of AL DÍA

Bastone, an Inspector in Philadelphia’s Sheriff’s Department, has seen devastation beyond his imagination and living conditions that are heart breaking. Many of the roads he’s travelled are nearly impassable requiring him to use sticks to lift electric wires sagging over the roads from partially downed pole to enable passage of trucks filled with relief supplies.

But there is one thing Bastone hasn’t seen much of while working sun-up to sun-down days bringing a little comfort to people, some of whom spend their nights on water soaked mattress because their homes lost roofs during the hurricanes and now have no protection from rain.

“As I drive by I see few trucks out doing repairs,” Bastone said last week during a cell phone interview from Puerto Rico.

“What clean up that is taking place is being done by people in their towns. They are the ones clearing roads, “ Bastone said.

“About 80 to 85 percent of the island has no electricity. So much of the devastation here is unreported. Most people have little idea of what people are going through down here. We’ve had people cry on our shoulders when we come with supplies”

Bastone and three other members of the Sheriff’s Department volunteered to go to Puerto Rico to help out for a few weeks. His colleagues Sheriff Department colleagues are Sgt. Joshua Perez along with Deputy Sheriffs Alessandro Carrasquillo and Enrique Marin. This quartet plus a buddy of Bastone’s who works for PECO that travelled with them are known affectionately for this humanitarian deployment in PR as ‘Philly Team 5.’

Bastone and his colleagues work on bulk distribution of supplies, taking them to remote areas. He said the most precious supply they deliver is water.

“Water is gold here. There is a big demand for water,” Bastone said about his work days in Puerto Rico that begin with loading supplies on box trucks and then driving to locations to distribute those supplies…well in many instances attempting to reach areas because they often encounter washed out bridges and mountain roads wiped out by mud slides.

Bastone’s used Facebook Live to help alert people to locations of where they distribute supplies.

Bastone also performs another vital aid duty – reaching out to relatives of people living in Philadelphia.

“People text me and ask me to check on people down here. I send videos back so people can see their folks here,” Bastone said.

Performing these relief work is fulfilling but not without personal sacrifice. Housing for Philly Team 5, initially was in a shelter with over 100 other volunteers, sharing an outside shower and limited toilets.

This “emotional” experience has “humbled” Bastone.

“I can’t imagine walking up one day and loosing everything you have worked hard for,” he said. “This has been so emotional for us.”