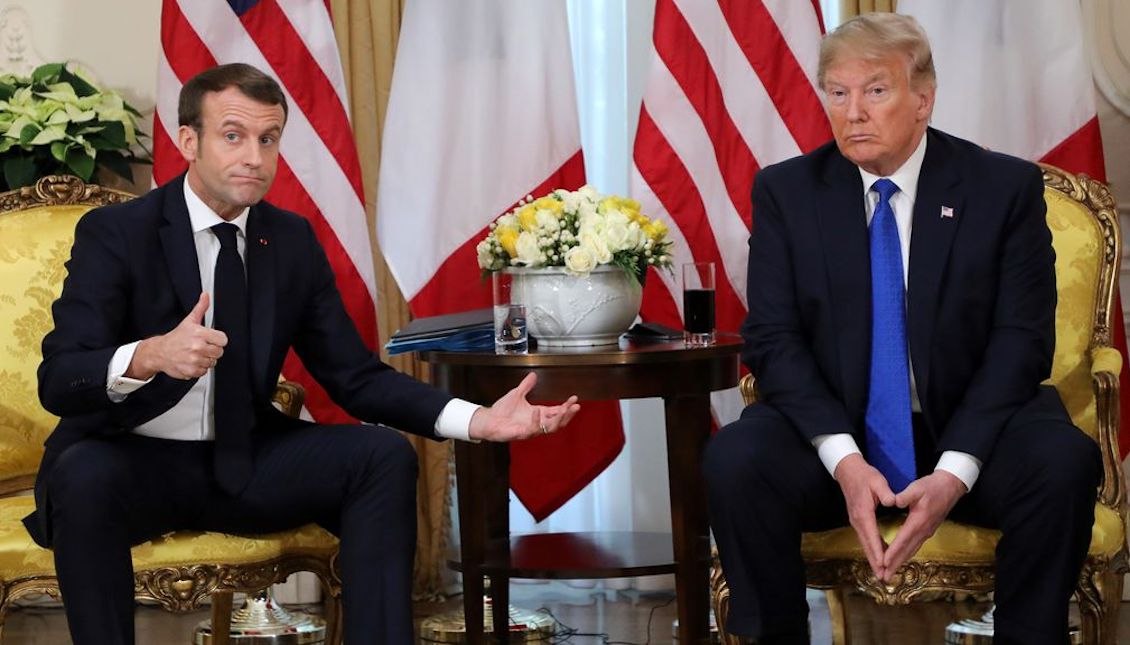 Trump vs. Macron, or how NATO is a victim of international political divisionism

The 70th anniversary of the North Atlantic Treaty Organization has been framed by deep disagreements among world leaders.

If Donald Trump believed that the 180-degree turnaround in American diplomacy introduced by his administration would go unnoticed, Emmanuel Macron has shown him otherwise.

After attempting to maintain a cordial relationship between the two delegations, the French and American presidents have ultimately found immovable points of disagreement during the North Atlantic Treaty Organization (NATO) summit on Tuesday.

The event opened with a tailspin of the French president's comments to The Economist newspaper, where he assured that NATO was "brain dead."

"If we don't wake up, there is a considerable risk that in the long run, we will disappear geopolitically, or at least lose control of our destiny," Macron said.

This gave the U.S. president an opportunity to make statements that would focus on his French counterpart and divert attention from his frequent and controversial positions when it comes to international diplomacy.

"It’s a very, very nasty statement to essentially 28 countries," Trump said, adding his touch by also saying, "France is not doing well economically at all. They are starting to tax other people's products. It's a very tough statement to make when you have such difficulty in France.”

However, despite the poor reception Macron’s words received, the French president was not far from hitting the nail on the head.

During the press conference of both leaders, Macron had the opportunity to highlight the unilateral decision of the United States and Turkey in northern Syria, as well as the stigmatization of groups like the Kurds by the Erdogan government, issues that put on the table the lack of coordination between the members of the organization in matters such as terrorism or civil war.

Erdogan, for example, has challenged NATO by buying "a sophisticated Russian anti-aircraft missile system," the New York Times explained, which has been interpreted as a threat to the organization's plans to update the defense of Poland and the Baltic states "if the alliance does not join him in labeling some Kurdish groups as terrorists.”

This is the kind of circumstance that the French president highlighted by remaining solid in his first statements and asking, "Who is the enemy today? And let's be clear and work together on that.”

Macron went further and assured that both he and President Trump "don’t have the same definition of terrorism around the table.”

"When I look at Turkey, they are fighting against those who fight with us," he added, referring to the Kurdish fighters who were left to their fate by Trump's unanticipated decision to withdraw from northern Syria.

At this point, and while the harshness sharpened on the first day of the summit, another change in U.S. international policy began to take center stage: the trade war against China.

While NATO's history has been marked by its character as a "wall" against Moscow's interference, its gradual transformation towards other issues such as terrorism and internal differences have left room for other powers such as China to take up more space.

"There is no way that NATO will move into the South China Sea, but we have to address the fact that China is coming closer to us, investing heavily in infrastructure," NATO Secretary-General Jens Stoltenberg said in an interview with CNBC on Monday.

While this could give Trump the opportunity to make his case about the need to impose tariffs on the Eastern giant, the president has once again put his personal interests above those of the United States:

"I have no deadline," Trump told reporters in a conversation of more than 50 minutes with Stoltenberg in London. "In some ways, I like the idea of waiting until after the election for the China deal”.