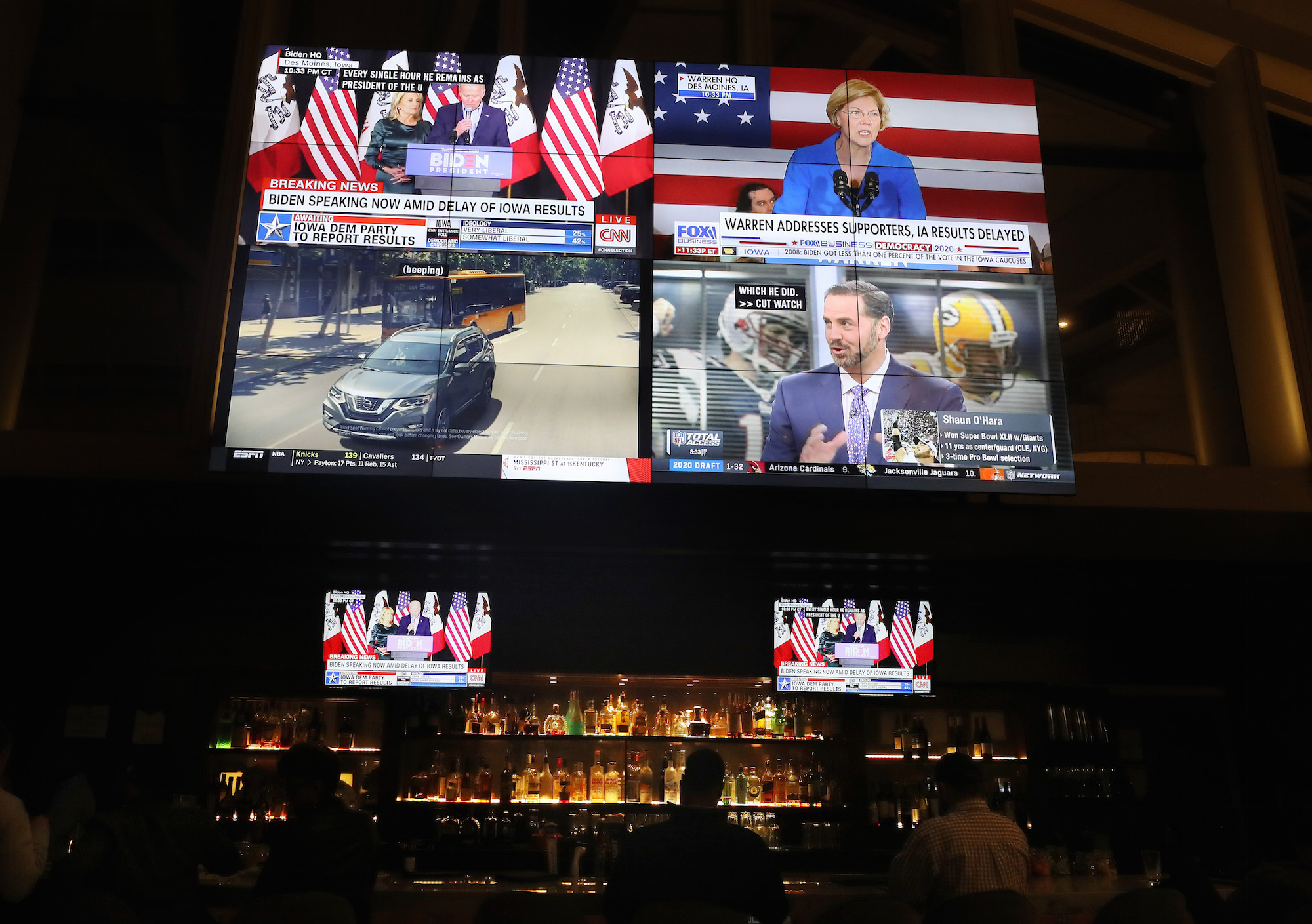 News from the Iowa caucus is broadcast on televisions in a hotel lobby bar on Capitol Hill on February 3, 2020 in Washington, DC. Photo: Mario Tama/Getty Images.

Initial reports say a coding error in a new smartphone application used to tally votes leave the Iowa caucuses still without a winner.

This article was updated at 5:17 p.m. after the first 62% of the results were released.

The road to Iowa was a long one, and after Monday’s caucuses, it got even longer. With the nation’s eyes on the Hawkeye state in anticipation of which Democratic candidate would snatch vital starting momentum, chaos ensued.

It was expected results would be known sometime late last night, but many woke up this morning reading headlines that 0% of the vote had been tallied.

The problem seems to lie in the various reporting techniques used by the more than 1,600 precincts to send results.

In past caucuses, precinct leaders — those tasked with tallying the votes at the various public meeting places — would report results over the phone. This year, however, a new digital option was also rolled out for use in the form of a smartphone application that is also connected to the Internet.

Democratic officials told CNN that the app had crashed.

In the immediate aftermath, the Democratic Party of Iowa was quick to announce that the delay was not the result of a hack.

What was left for those struggling with the new tech was to report the results by phone the old-fashioned way.

The only problem? It seems that wasn’t the planned primary route of collection and many were left on hold for hours trying to report results.

NPR’s Miles Parks tweeted that when asking a state official how many were on hand to answer phones, he was told “at least a dozen.”

With over 1,600 precincts that needed to report, that would mean that of a dozen staffers, each would have to respond to and record at least 133 calls.

Adding further fervor to the chaos, many of the Democratic candidates also gave the equivalent of victory speeches despite not knowing any results. Those to declare victory or success include: former Vice President Joe Biden, Mayor of South Bend Pete Buttigieg, Sen. Bernie Sanders, Sen. Amy Klobuchar, Sen. Elizabeth Warren, and Andrew Yang.

"We don’t know all the results, but we know by the time it’s all said and done, Iowa you have shocked the nation," Buttigieg told a crowd of supporters. “By all indications, we are going on to New Hampshire victorious.”

"From our indications, it's going to be close, we are going to walk out of here with our share of delegates. We don't know exactly what it is yet, but we feel good about where we are," he said.

Warren said the race was “too close to call,” and Klobuchar claimed she’s “punching above her weight.”

Yang was the most reserved in his speech. He called himself a “numbers guy” and admitted to “still be waiting on numbers.”

Around 5 p.m. Tuesday, the Iowa Democratic Party reported only 62% of the vote. Buttigieg currently holds a slim lead over Sanders in second. Warren is a distant third alongside Biden in fourth and Klobuchar in fifth.