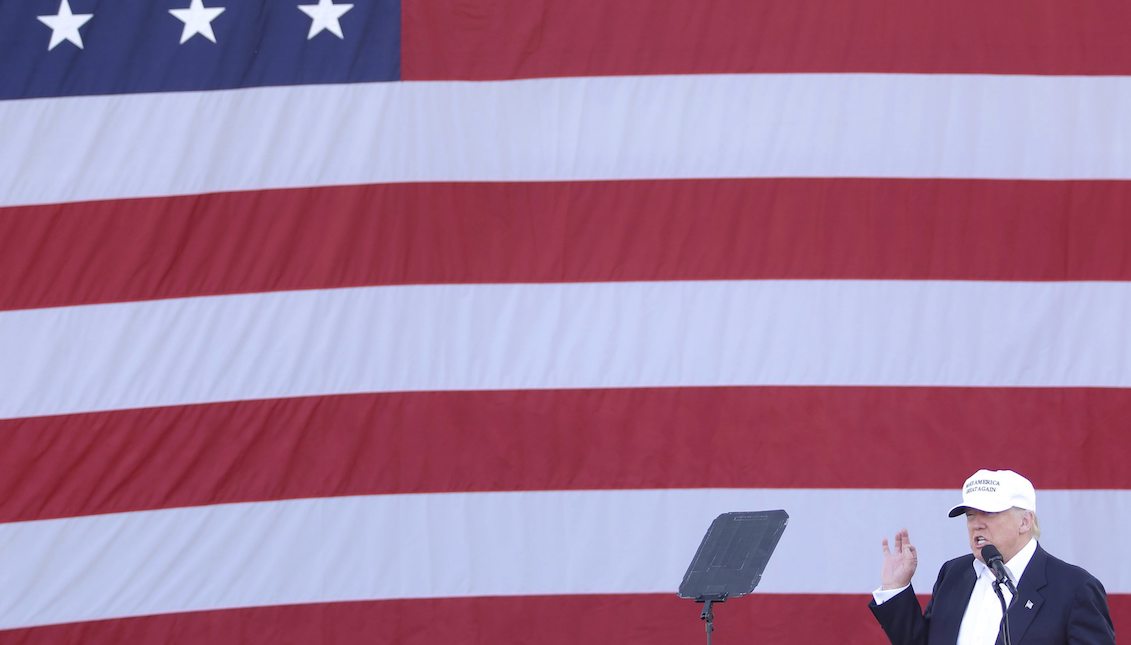 02/11/2016.- Donald Trump gives a speech during an act of his campaign. EFE/Cristobal Herrera

What happened with “America comes first”?

Trump's new international policies are a radical change in the electoral proposals he championed for more than a year. Perhaps the new president is not so far…

The international strategic landscape now has two major leaders: Donald Trump and Kim Jong Un, two of the heads of state with more nuclear weapons in sight, whose interests do not seem to coincide at any moment except at who is the strongest.

Following Trump's shift in his interventionist policy in Syria, his relationship with Moscow was irreversibly cracked, thus favoring the internal investigation processes he has undergone since his victory was declared in November last year.

Business with the Russian mafia, his admiration for Putin and the intimate relations between his company and large Russian investors, assumed that his intervention in Moscow’s little gold mine - Syria - would be small, if not nonexistent.

But after witnessing Al-Assad's chemical attack on Syria's Idlib province, international media pressure was over and the moldable president made a decision with his heart, launching an attack on an air base in the Arab country, where Russian officials were, taking by surprise the international observers and setting the tone in his relationship with the government of Vladimir Putin.

Nowadays the Russian official media have radically changed their propaganda machinery against Donald Trump - who they once praised as the new president of the power with whom they have been in conflict for more than 70 years.

"Trump's decision to launch a missile strike against Syria, a Russian ally, drop a giant bomb on Afghanistan, and stick with Obama-era policies on Crimea, mean Russian hopes of him befriending the Kremlin have been on the slide for a while", Andrew Osborn said in his column for Reuters.

Dmitry Kiselyov, the host of Russia's most important television show "Vesti Nedeli", has begun to criticize President Trump and has assured that between Kim Jong-Un and Donald Trump, the second is much more dangerous at the time of a nuclear war.

Kiselyov's argument is the "impulsivity and unpredictability" of the US president, as well as his "limited international experience and willingness to go to war," according to Osborn's analysis.

Five facts to understand Russia's invasion of Ukraine
February 24th, 2022
Who was Amerigo Vespucci and how did he name an entire continent by mistake?
September 29th, 2021
A roadmap of President Trump’s last days in office
January 8th, 2021

But Russia is not Syria's only ally. North Korea has been a supporter of Bashar al-Assad’s government and, while it has publicly denied any kind of military collaboration, it is well known that its advice has radicalized its stance in the conflict, putting it side by side with Moscow.

The nuclear threat posed by North Korea has been a hot spot in international politics, which has been managed with silk gloves to avoid inciting the impulsiveness of Jong-Un.

Asked about cooperation with China to reduce North Korea's nuclear threat, Donald Trump responded: "Well, if China does not resolve the issue with North Korea, we will. That's all I'm going to tell you”, as reported by The Atlantic.

Weeks later, hostility in northeastern Asia did not seem to diminish as an American aircraft carrier moved to the Korean peninsula, prompting the deployment of weapons in the "Day of the Sun" parade – a failed test, by the way - that Jong-Un carried out to demonstrate "who is in charge" on nuclear matters.

The irreparable relationship between the United States and North Korea does not pose a favorable world scenario, with many opinions derived towards an impending nuclear conflict. But, how are things at home?

With a 20% decline in polls, Donald Trump does not seem to deliver on his electoral promises. A demonstration calling for his fiscal report and a field war in Berkeley are just the beginning of what an aggressive international politics wants to disguise in the scenario of domestic problems.