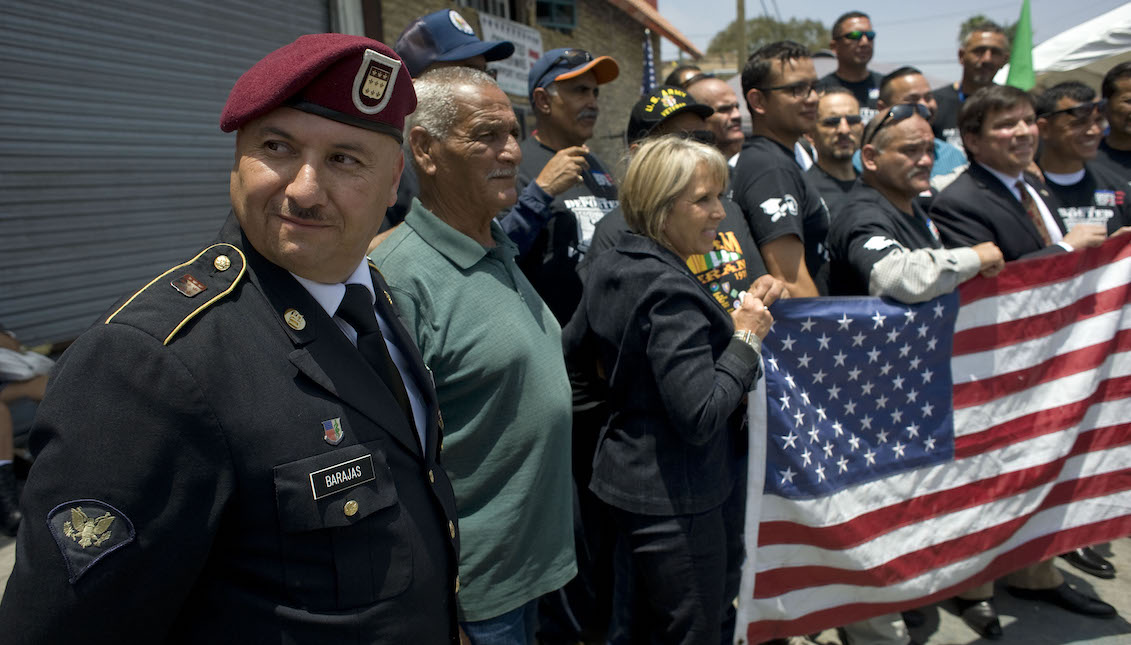 Veteran Hector Barajas (i) observes while some of his companions pose with some US congressmen during the visit of seven members of the US Congress to the House of Support for deported Veterans on Saturday, June 3, 2017, in Tijuana, Mexico. EFE/David…

They served in the army and still were deported

Several men who agreed to join the US military in exchange for a citizenship opportunity are currently on Mexico's border after being deported.

In January of this year, there were 10,644 undocumented immigrants serving in the United States army and 11,524 reservists, according to San Diego's NBC. Even so, many of them are in Tijuana, after being deported by the ICE.

Héctor Barajas explained his case to the delegation headed by the California Democrat, Juan Vargas, who went to the border on Saturday to visit deported veterans as a strategy to push forward the package of bills he introduced last fall, hoping to help deported veterans.

Barajas was deported after being tried for firing a gun. He retired honorably from the Navy and after serving his sentence was sent back to Mexico. Barajas was convinced that he would obtain citizenship automatically once he had served, according to the Chicago Tribune.

On Saturday, Barajas shared an pledge that was signed by members of Congress accompanying Vargas, and that read in part: “We believe that anyone who is willing to join the U.S. military, fight and give their life for the U.S., should be a citizen and not subject to deportation from the country they serve."

Since being deported, Barajas has become "something more than a patriot," since he runs the House of Support for Deported Veterans in Tijuana, where he received the team of congressmen.

Another veteran, Edwin Salgado, told his story. He arrived in the United States at only 3 years of age. He served in Kuwait, and joined the navy at 18 because he felt that "it was something I had to do for my country." Salgado was sent back to Mexico after being indicted on charges of drugs and weapons. He spent a year in prison.

Salgado said he was not aware that veterans could be deported. "They allow me to return when I die. One way or another, I will return. "

For the Democratic Representative of Arizona, Raul M. Grijalva, this is surprising: veterans deported receive military funeral service but must stay out of the country while they are alive. Grijalva has introduced a proposal (HR 1470) last March as an initiative to prevent the deportation of veterans who have committed minor crimes. So far the law has 51 sponsors, all Democrats.

Barajas and two other veterans deported officially received pardons from the governor of California for previous criminal convictions, which opens the way for veterans to apply for US citizenship, according to EFE.