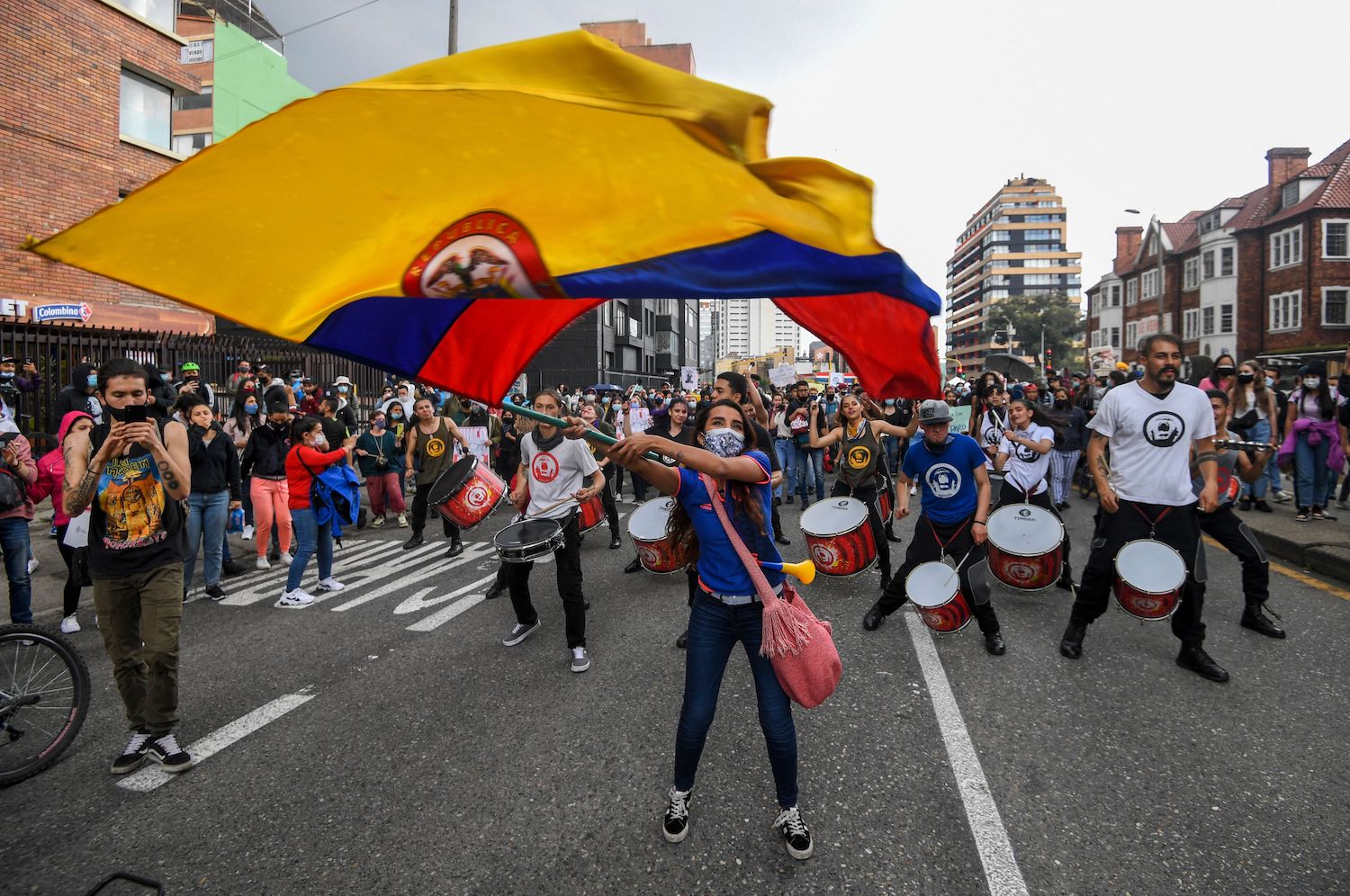 A woman waves a Colombian national flag during a protest against a tax reform proposed by Colombian President Ivan Duque's government in Bogota, on May 4, 2021. Photo: Juan Barreto/AFP via Getty Images.

Demonstrations that began as a general strike against the President’s fiscal plan were quickly met with excessive police force. There are many driving factors…

Rep. Alexandria Ocasio-Cortez is the latest Latinx politician to come out and stand in solidarity with Colombian protesters and the hundreds who have been injured in recent demonstrations taking place across the country.

"We stand with our Colombian brothers and sisters, in NY-14 and abroad, against the state killings of protestors. All people should have a fundamental right to demonstrate against their elected leaders. These citizens were protesting against anti-working class reforms and, for that, they lost their lives. There must be accountability for the long string of human rights abuses exercised by the Colombian government,” she wrote in a statement released on May 6.

The marches began last week after Colombian President Iván Duque Márquez proposed a tax overhaul meant to reverse a pandemic-related economic downturn. By last weekend, amid the widespread demonstrations that continue to rattle the country, he let go of the plan, but the protests stem from more than one source.

They’re an extension of the growing frustration of Colombia’s Covid-19 response and police violence. They’re also a continuation of a 2019 movement that swept Latin America, where Colombia also mobilized on a massive scale for the first time in decades.

At the time, Duque’s actions caused tensions among several Colombian social sectors and organizations when he tried to dismantle the Special Jurisdiction for Peace.

More hardships came with the subsequent pandemic in 2020, and Latin America became one of the hardest-hit regions in the world. In Colombia, the economy dipped by an average of 7%. Unemployment, particularly among younger demographics, is also soaring.

The unrest in 2021 has not subsided since Duque announced he was letting go of the controversial fiscal plan.

The public, now fueled by outrage at the government’s heavy-handed response to initial protests, have grown their protesting power to include people from all backgrounds, including doctors, teachers, union members, longtime activists, and those who have never demonstrated in public before. Even some of the country’s biggest music stars have chimed in on the situation.

Colombia protest draw worldwide attention, scorn from some of its biggest starshttps://t.co/iXEYgXetq0

Massive protests, particularly in Bogotá, Cali and Medellín, continue where citizens have had their limit with excessive police force, inequality and rising poverty. The violence has left anywhere from 24 people to 37 people dead, most of whom are demonstrators, and nearly 90 people are missing.

Cali, the nation’s third-biggest city was the worst-affected by the ongoing unrest, and it has had soldiers patrolling its streets on government orders since last Friday, April 30.

The Ministry of Defense has proceeded with a heavy hand, having deployed nearly 50,000 armed personnel across the country. In Cali alone, there are 700 soldiers, 500 riot police, and 1,800 other police as well as two helicopters in operation.

The violence continues, and calls for awareness in other nations slowly gaining traction.

In a separate Instagram story, Rep. AOC wrote: “People everywhere should have the right to public assembly and protest free from state violence. And those responsible for such violence should be held accountable — whether that state violence is here in the United States or abroad,” connecting the issue in Colombia to a global issue.

“The struggle for justice is a global one, and we as a progressive movement in the United States must grow to meet and champion that truth,” she continued.

Colombian series on Disney+ premieres in June.
May 13th, 2022
Statues of vallenato singers removed in Valledupar, Colombia
May 11th, 2022
Colombia opens one of the best cultural centers in Latin America
May 9th, 2022

AOC’s call was joined by the voices of other state and Congressional representatives, like Jim McGovern and Ilhan Omar, as well as that of New York State Senator Jessica Ramos, who demanded an end to police repression in the country.

Ramos herself is Colombian, and is expected to join marchers on the streets of Jackson Heights on May 7, in support of the anti-government protests in Colombia. Her community of Queens has the largest population of Colombian-Americans of any county in the country.

"I am deeply concerned about the situation in Colombia. I pray for the families of the dead and wounded," Taddeo told Miami Diario.

Rep. Ilhan Omar connected the issue to the transnational issue of police violence.

“Standing in solidarity with the unions and workers in Colombia who are facing violence at the hands of the state during International Workers’ Day protests. Police violence is a transnational problem,” she wrote on May 3.

“I am sending love to our Colombian family fighting for equality. I am standing in solidarity with their fight, recognizing that we are all bound together in the fight for justice and humanity,” he wrote.

I am sending love to our Colombian family fighting for equality.

I am standing in solidarity with their fight, recognizing that we are all bound together in the fight for justice and humanity. https://t.co/qqTMAQuETU

Now over a week since protests broke out in Colombia, they have brought several major cities to a standstill. More than 550 people have been arrested, and the United Nations has openly criticized the Colombian government for using excessive police force.