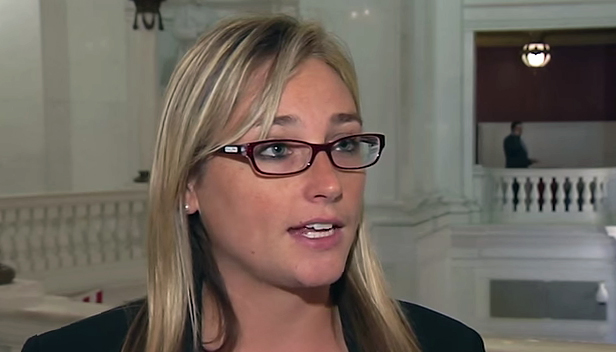 A group of immigrant-rights advocates paid a surprise visit to State Rep. Martina White in her Harrisburg office Monday, and the conversation quickly reached a boiling point.

Representatives from four advocacy groups — Juntos, Pennsylvania Immigration and Citizenship Coalition, the New Sanctuary Movement, and Make the Road PA — were in the Capitol building to talk with several lawmakers regarding a folder of immigration-related bills introduced last month, one of which was penned by White.

Her bill seeks to penalize “sanctuary cities” like Philadelphia, which restrict local law enforcement from cooperating with federal immigration authorities. If passed, the legislation would force these cities to pay for any damages to people or property as a result “criminal activity by unauthorized aliens.”

Erika Almiron, the director of Juntos, said that White invited the group into her office. “You didn’t have the appointment, but I will give you the courtesy of my time,” White told the group, according to video given to AL DÍA News.

The conversation was somewhat civil until allegations emerged over what the group saw as White’s “racist rhetoric.”

Yared Portillo of Juntos asked White if she wanted to be like “Trump in Pennsylvania.”

“I don’t feel that I need to respond to that,” White said. “Number one, I want you to know that my bill has no rhetoric in it. It is specifically to uphold federal law.” At this point, White starts raising her voice. “Right now there are people breaking the law by being here in our state illegally. You know that? You know that, right?”

The exchange went downhill from here. White eventually asked the group to leave her office, saying that she was headed to the floor of House of Representatives to deliver remarks honoring a firefighter in her district. The group then asked White about the contributions of undocumented persons who have served in the military and fire departments around the country.

Here’s a transcript leading up to the video clip:

WHITE: I’m not disregarding it. I appreciate the fact that these people come here—

ALMIRON: Could you please stop referring to us as “these people”?

WHITE: How would you like me to refer to you?

ALMIRON: As Latinos, as immigrants, as people. Not “these people.”

PORTILLO: We’re asking you to stop using “these people.”

WHITE: Well … this is what the benefit of being in America is. It’s that you have the freedom of speech. Please leave my office now. I’m not going to be harassed in my own office.

ALMIRON: We’re not harassing you. We’re here to meet with you—

WHITE: Yes you are. Please leave. I’ve asked you twice to leave my office. I need you to leave now. Promptly.

Security escorted the group out of the Capitol building. Multiple requests for comment from Rep. White’s office were not returned by the end of business day on Monday.

“Our objective was to get her to hear us, and I think she heard us,” Almiron said later. “I don’t think she liked what she heard, but this won’t be the first time or the last time that we visit her. We’re not accepting a Trump in Pennsylvania.”