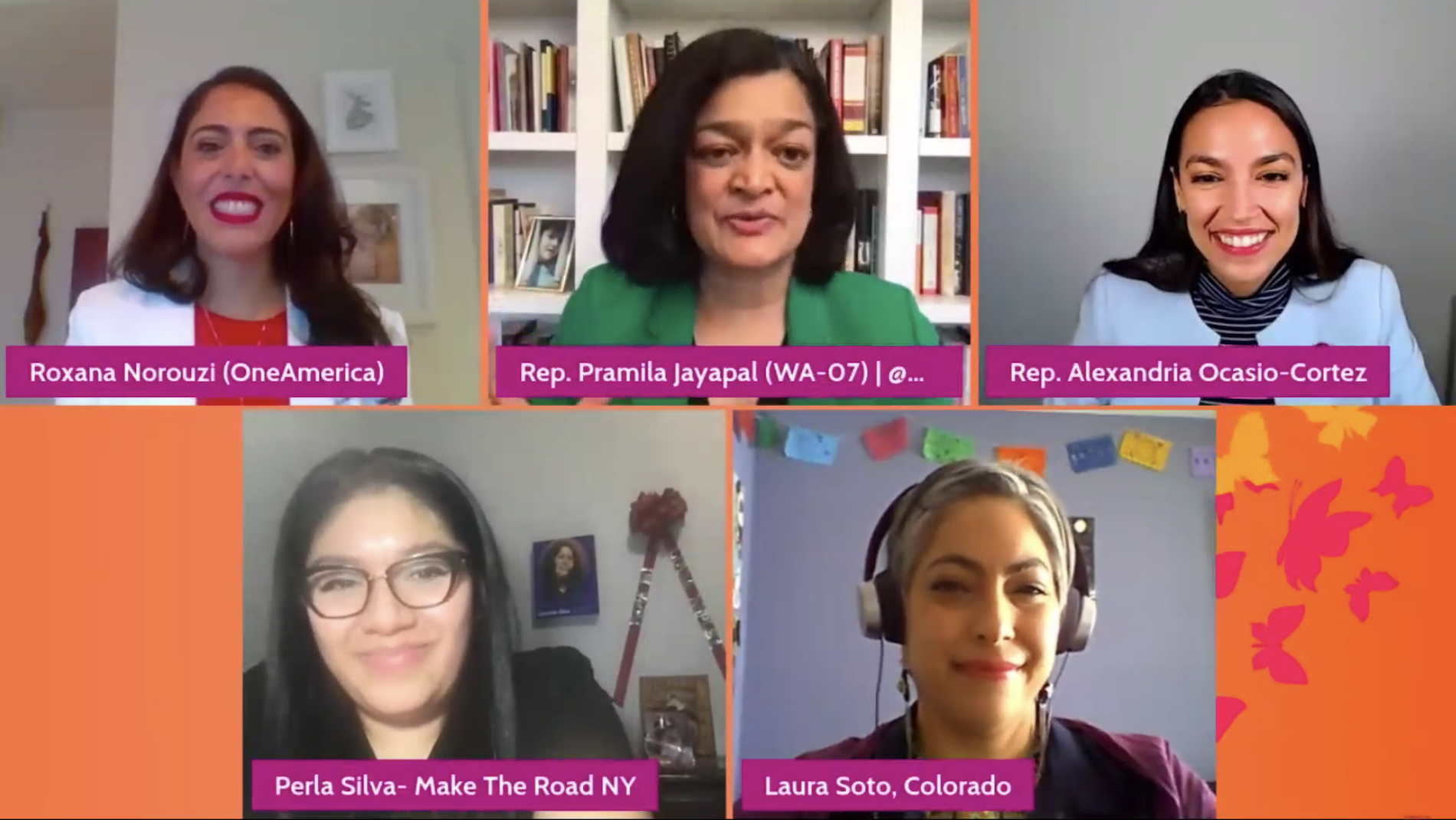 This is what President Biden and Alejandro Mayorkas need to do to merit the label. Photo: Rep. Jayapal.

Biden’s first real test as president has not been the transfer of power. Instead, immigration policies have taken center-stage since day one of his presidency, which began exactly a week ago.

With a barrage of executive actions, the president reversed a bulk of Trump-era policy within the first few hours of his administration alone.

But is Biden's immigration reform “sweeping,” as multiple outlets, including AL DIA have deigned to call it?

So far, Senator Bob Menendez (D-NJ), a longtime advocate for immigration rights, announced last week that he would lead the legislative efforts in the Senate.

In a statement, he said he would work to outlining a path to citizenship, and address root causes for immigration and to improve the border’s security strategy.

In conjunction with Biden’s already outlined plans, the strategies suggested and enacted through executive order so far are far from “sweeping,” and do not comprehensively outline vital plans for immigrants, and how to improve already life-threatening situations.

Progressive dems met on Jan 27 to discuss what may actually merit the title of “sweeping” immigration reform, and not a mere shift from prior policy.

The legislation was first announced in December, and is co-led by several members of the  Congressional Hispanic Caucus, Congressional Black Caucus, and the Congressional Asian Pacific American Caucus.

Among its reforms, the bill seeks a more equitable immigration process for 11 million people that centers on family unity and diversity. It also increases protections for immigrant workers , and increases access to public services for immigrants.

The full bill can be found here.

“We are not just about simply reversing the hateful immigration policies of the last four years. America’s racist and xenophobic immigration system has been broken for decades, and as we begin a new presidential administration, we need to finally leave our country’s long history of criminalizing immigration and separating families behind,” Rep Jayapal said during the bill’s reintroduction.

She called it a bold and progressive vision for what humane immigration policy looks like, and that “for too long Congress has approached immigration reform through trade-offs — trading protections for some in exchange for increased enforcement.”

Rep. “Chuy” Garcia (D-IL) commended the actions President Biden has already taken, from the moratorium on deportations, an end to the zero tolerance policy that forced child separation, and the restoration of DACA.

“Those steps are important,” Garcia noted, “But what we are introducing today is a comprehensive roadmap to return America to a nation that welcomes and celebrates its diversity.”

However other reps like Escobar went on to further say that a “return” isn’t possible because the issues in the immigration system didn’t begin within the last four years.

Under President Obama, the nation saw-record deportations, and border communities have seen a militarization that dates back decades, Escobar noted.

Immigration and Border Enforcement (ICE), formed at the turn of the century, has also grown to play a notorious part in the treatment of immigrants from Latin America and the Pacific Asian-Americans.

Just today, on Jan. 27, Reps. Ayanna Pressley, AOC and more brought attention to deportations that ICE is attempting to push-through despite Biden’s federal orders not to.

“People must understand the depth of what’s happening here: the President of the United States has ordered a halt to deportations. ICE, a federal agency, is refusing to comply. There’s no reforming this rogue dept. It’s time for a new, just vision,” AOC wrote on Twitter.

People must understand the depth of what’s happening here: the President of the United States has ordered a halt to deportations. ICE, a federal agency, is refusing to comply.

There’s no reforming this rogue dept. It’s time for a new, just vision.

This raises the question of ICE’s involvement in a future with Jayapal’s bill in mind: What does ICE’s recent actions signal in terms of a future with ICE, and what will future DHS Secretary Alejandro Mayorkas need to answer for once he is confirmed?

Jayapal told AL DÍA she is pleased with Mayorkas’ nomination.

“I think a lot of the things we’re going to see immediately are coming from his direction out of the Biden administration,” she said.

Jayapal added that because the nation criminalizes immigrants, private detention centers must end as well, signaling further alternatives to the detention system altogether.

“But first you need to reduce the numbers of people that are actually being detained, and then you put in place the alternatives. So that’s how we envision that, but that requires the full reforms of the policies of immigration,” she said.

Within the issues with detention and ICE’s policies comes another myriad of issues that the Biden administration has yet to answer for — the mental toll on immigrants, for one.

The mental toll is vastly underreported on the prolonged separation of families, especially with very young children who are subjected to the most trauma and even face dissociation or loss of familiarity with loved ones.

AL DÍA asked Rep. AOC if there have been any talks of providing mental health assistance for refugees and for those children who remain separated, as the government has essentially lost their parents.

“I don't think that is something we should try to sugarcoat or to brush under the rug,” Rep. AOC said, adding that it is her belief that the United States owes these families.

“And whether that is in the form of guaranteed healthcare, whether it is in the form of expediting their citizenship, there are many, many forms of relief that we owe as part of paying our debt as a country for the great moral wrong.”

She signaled that this sort of intersectional approach should be applied to all policy.

“When we decide to, for example, with medicare for all, saying that immigrants should be covered. When we fight for frontline workers to be included in stimulus checks. This is not just about targeted immigration policy. This is about all of our policy— honoring the contributions of immigrants, including in healthcare and mental healthcare.”

“We owe these families for the rest of their lives period.”

ICE has yet to be held accountable for its atrocities moving forward, but perhaps with guiding frameworks — whether it be Jayapal’s legislation or similar movements, the future of U.S. immigration will be completely reimagined and revisioned.

The United States has not led in the rhetoric of being a welcoming leader in immigration, nor has President Biden delivered “sweeping” reform. Rep. Jayapal’s outline would bring the nation closer to meriting the word.