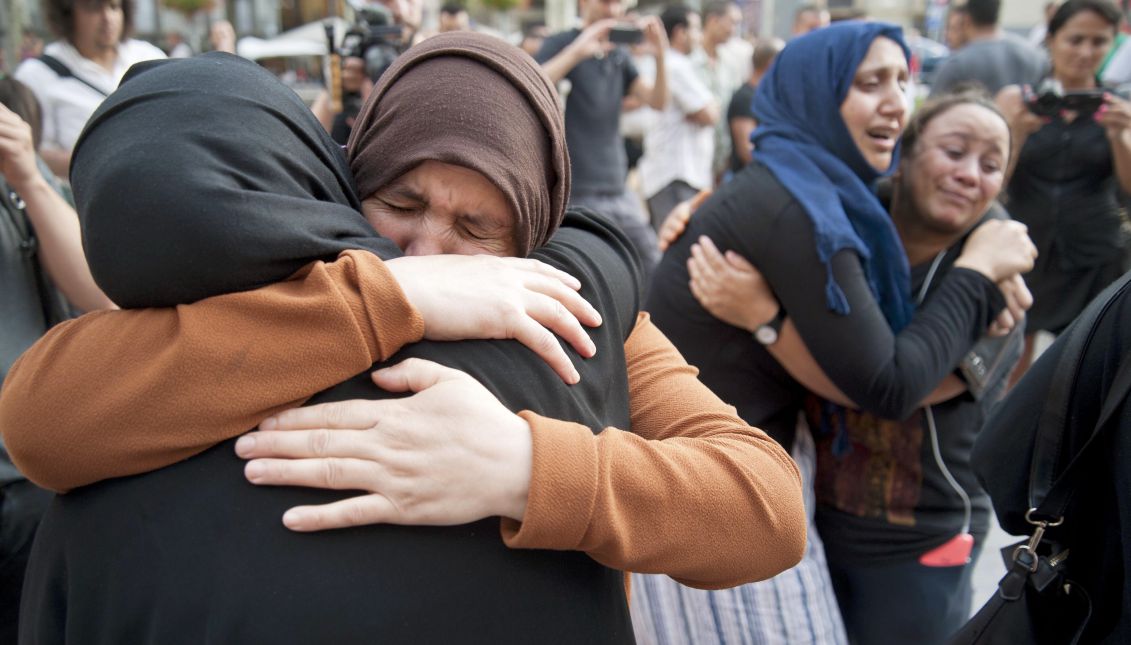 The mothers of the terrorists gathered in the town square of Ripoll and broke in the tears. EFE/Robin Townsend

One weekend in early August my Argentine cousins ​​and I took an excursion through the Catalan Pyrenees, seven hours of uphill trekking, leaving behind green meadows, cold water streams and stone medieval shrines with slate roofs. On our way back to Barcelona, ​​tired and hungry, we stopped for some tapas in Ripoll, a small town of about 11,000 inhabitants, known mainly for its spectacular Romanesque monastery from the 9th century, and for having been the cradle of the disappeared iron and steel industry of Catalonia.

Like other neighbors, my cousins ​​and I sat on a terrace and devoured our portions of Spanish tortilla (potato omelette) and bread with tomato, enjoying the pleasant summer evening, the mountain breeze, without suspecting that in a matter of weeks this quiet municipality at the foot of the Pyrenees would become the epicenter of Spanish Islamic terrorism.

According to reports from the Catalan police, the five terrorists linked to the Barcelona and Cambrils attacks, in which 14 people were killed and more than 100 wounded, were young men from Moroccan descendant that apparently had a normal life in Ripoll. Except that they belonged to a terrorist cell that was forged in this tiny town.

The responsible for their radicalization was the imam of Ripoll, Abdelbaki es Satty, a man of about 45 years, who lived in a rented flat. He had not been in the village for a couple of months - he had said that he was going on a vacation to Morocco, - and his apartment was empty, but he still paid the rent, according to his landlord. It came out that Es Satty was also one of the main strategists of the terrorist attacks that, judging by the arsenal of explosives stored in a villa in Alcanar, south of Barcelona, were planned to be much larger.

The population of Ripoll is in a state of shock. The suspects - all of them shot down by the police, except the driver of the van, who is still on the run - were pretty well-know by the neighbours. It is hard for them to think that so much hatred has come out of Ripoll streets.

"He was a normal guy, very integrated, no one could have any suspicion that he could end up like this," one of the educators of Moussa Oukabir, one of the terrorists shot down by the police before commiting a terrorist attack in Cambrils, told to La Vanguardia.

Moussa, the penultimate of the five children of a Moroccan couple, was only 17 years old. Their parents arrived in Ripoll from Morocco in 1989 and they are part of the scarce 9% of immigrant population that lives in the municipality. Moussa was studying to be a mechanic and installer and often played football on a local team. His parents still make crosses to what his son did. They blame the Imam for having radicalized the young. Before Es Satty's arrival, they were hardly going to the mosque, they said. On Saturday, the mother of the van driver and author of the terrorist attack in las Ramblas joined the anti-terrorism rally at Ripoll City Hall and asked her son to turn himself in to the police. "I'd rather see him in prison than dead," she said.

In recent decades, thousands of Moroccans have immigrated to Catalonia, the rich region of northeastern Spain, to work as cheap labor in factories or in agriculture. So far the coexistence has been peaceful, although the cultural discrimination and social stigmas suffered by the Maghreb community - the "moros", as they are sadly called sometimes- is a reality. In other municipalities with a greater concentration of immigrants than Ripoll, such as Mataró, Santa Coloma de Farners or Premià de Mar, the formation of ghettos is evident.

"Premià de Mar is full of "moros," that's why apartment rents are much cheaper," said to me Adriana, mother of two daughters, who lives in the neighbor town of Vilassar de Mar. Only 2 miles separate Vilassar de Mar from Premià de Mar. Adriana (Architect, blond, owns a nice house by the beach)  says she would never live in Premià because she doesn't like to go for a walk with her little kids and see inmmigrants around.

In some neighborhoods of these cities, including Barcelona, public schools are filled with immigrants and many Catalan parents prefer to take their children to other schools, even if they are further away from their homes. They fear that in centers where more immigrants are concentrated the educational lever will get lower, or that their children will grow up in conflictive environments.

In Barcelona city, social inclusion is greater than in little towns. It is true that people with resources and families with children usually prefer to live in the northern neighborhoods, with wider streets, landscaped areas and a bigger offer of modern flats than in the neighborhoods of the historic center like the Raval. Howerver, within the years,  the narrow streets of Raval, adjoining the Ramblas, have become a symbol of multiculturalism. Today, you can see tourists, muslim inmigrants, local shoppers and prostitutes peacefully living together.

And the terrorist attack of last August 17 will not be able to destroy the multicultural spirit of its streets, nor of Barcelona, if its citizens strive to overcome the fears and prejudices that the attack could have awakened. "No tenim por" (We are not afraid) is the motto of the pacificist manifestations held in the last days, and also the motto that hangs of windows and balconies of the Ramblas, togteher with candles and flowers.

Soon, another motto will be added.: "Not in my name". The Muslim community of Catalonia has convened for this Monday afternoon a mass demonstration in the center of Barcelona to condemn the terrorist attacks. More than 140 Muslim associations will demonstrate to make clear that Islam and terrorism do not go together. "Islam does not say anything about killing, it's something else, ... it's love," as a neighbor of Ripoll told Catalunya Radio.