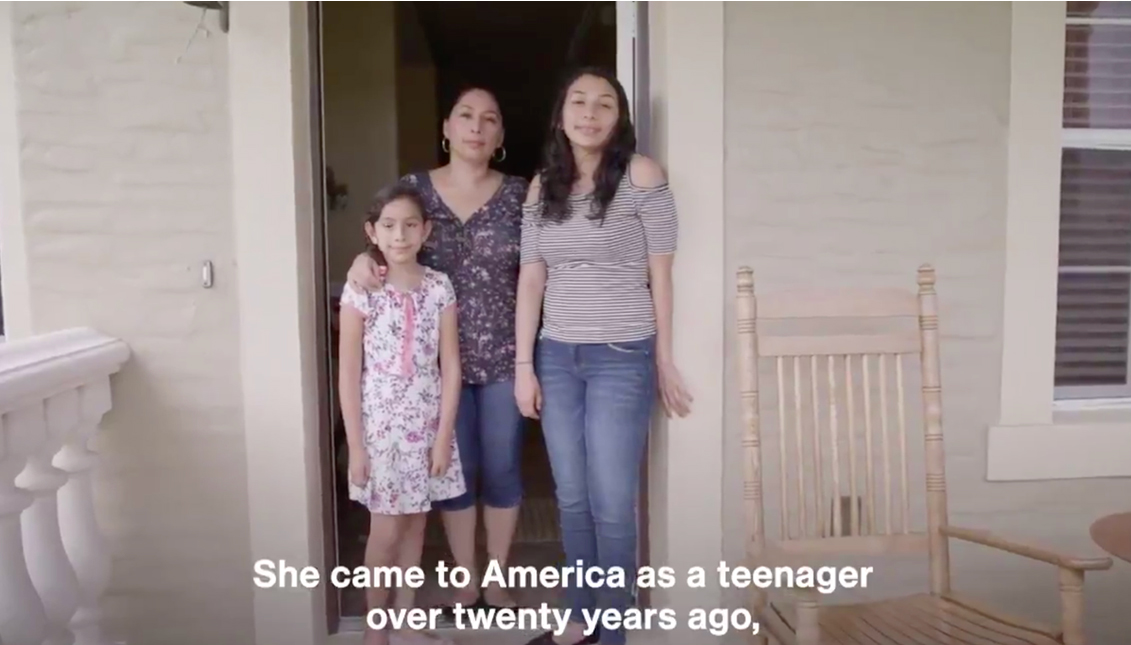 Two families had the chance to tell their stories of how Trump’s immigration policies have affected their lives. Photo: Screenshot; Twitter DNC

From tales of immigrants who risked their lives, family separation, and Kamala Harris’ parents – immigrant stories were not ignored.

On day three of the Democratic National Convention, two families recounted how their lives have been altered by policies implemented by the Trump administration.

Immigration took center stage at the DNC not just through first-hand accounts by these families, but also through the representation at the highest levels of power: Kamala Harris also spoke on her parents’ immigrant stories, and how they have shaped her career.

The first family featured a moving speech by 11-year-old Estela Juarez from Florida, who addressed Donald Trump in a letter.

Juarez’ mother came to America as a teenager over 20 years ago, undocumented, and in the pursuit of a better life.

In 2018, Juarez’s family garnered national attention after ICE confiscated her mother’s  passport and pressured her to self-deport to Mexico.

In her letter, Estela addressed Trump, explaining her father’s decision to support him as a veteran.

“My dad thought you would protect military families, so he voted for you in 2016, Mr. President,” she said.

“He says he won’t vote for you again after what you did to our family. Instead of protecting us, you tore our world apart,” she continued.

To add to Estela’s segment, it also used clips of children in cages in detention centers, and the brutal imagery of family separation to illustrate what is at stake in November.

It’s not just Estela’s family, but also the thousands of immigrants traveling to the U.S. who don’t know what they will be facing.

Trump was also featured in the segment, bringing all the viewers to his campaign trail, and the damaging words he ran his campaign on at the expense of Latinx immigrants, saying things like:  “These aren’t people,” “I don’t want them in our country,” and “They’re animals!”

The second segment featured Silvia Sanchez and her daughters, Jessica and Lucy. Jessica was born with spina bifida, and because of her condition, Silvia took her baby across the border to get adequate care for her.

“I did what any mother would do to save her daughter’s life,” Silvia said.

Lusy was born later, but that makes all the difference in their lives.

While Lucy is a citizen, Jessica is a DREAMer, and their mother, too, is undocumented.

The trio explained how Trump’s immigration policies have them under constant fear of separation, a situation that is especially dire for them because of Jessica’s medical condition.

Former president Barack Obama also narrated a video on immigration for the DNC, but several immigration activists stepped forward to criticize him on taking the platform when millions of immigrants were deported under his administration.

"Immigration is our origin story," Obama narrated. "After all, unless your family is Native American, all of our families come from someplace else."

Julissa Natzely Arce Raya, immigrant rights advocate and author of My (Underground) American Dream, commented that she wished someone else had narrated the video.

“We must face all the things we don't like. The uncomfortable truths. This is one of them. If we can face it, admit the harm, then, and only then, can we do better,” Raya wrote.

The night ended with a speech by Oakland-raised Kamala Harris, in which she described the story of her upbringing, and focused on growing up with the influence from her parents.

Both immigrants, Harris’ mother immigrated from India, and her father arrived from Jamaica.

“She taught us to put family first,” Harris said of her mother, who died of cancer in 2009. “The family you’re ​born​ ​into​ and the family you ​choose​ — but to also see a world beyond ourselves.”

Today, the United States has more immigrants than any other in the world. There are over 40 million, accounting for one-fifth of the world’s migrants — a historic high, according to Pew Research.

Out of those 40 million, nearly a quarter are classified as unauthorized immigrants.

This is why day three of the DNC mattered to so many. Representation is often written off as a ploy to appeal to the immigrant vote, or to appear more progressive than reality.

But when someone is able to see themselves — through someone with a background like Kamala Harris’ or someone who has lived through the same hardships as the two families that told their stories — that is progress with incalculable value.