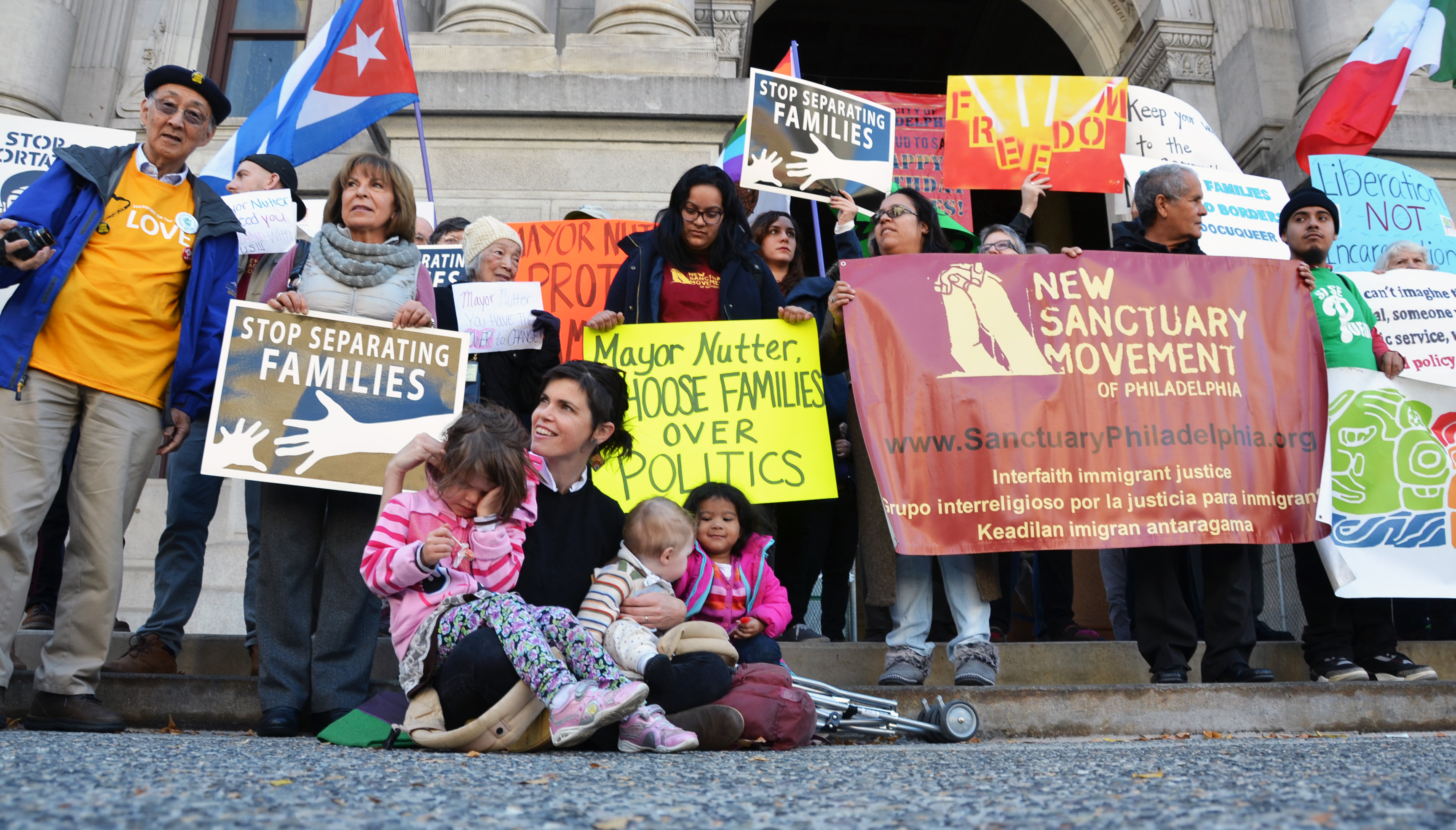 Outside of City Hall on Monday, a crowd of over 50 people representing several immigrant-rights groups protested against Mayor Michael Nutter’s plan to modify the ‘sanctuary city’ executive order.

The order, which was signed into law 18 months ago, bars local law enforcement from cooperating with the federal Immigration and Customs Enforcement (ICE) agents in order to detain undocumented persons.

Erika Almiron, director of Juntos, an immigration advocacy group based in South Philadelphia, was an early champion for the executive order. At the rally she recounted her long fight with the Nutter administration “in order to separate a deadly immigration and deportation system from the police department.” Now, Almiron feels her community has been betrayed at the eleventh hour.

The administration “is willing, for political maneuvering and to advance their own political careers, to sell our community,” Almiron said through a megaphone. “And what we’re saying is no more.”

Signs carried by the protesters either decried deportation (“Who would Jesus deport?”) or the mayor himself (“Nutter, choose people over politics”). Several speakers spoke negatively of alleged political motivations behind changing the executive order at this time.

The news dropped Thursday in a closed-door meeting.

Nutter’s changes would reportedly allow local-federal cooperation only in the cases of undocumented persons accused of murder, rape, robbery, domestic violence, illegal possession of a firearm, or “terrorist” activity. There was also mention of persons who are deemed "a threat to public safety," several sources said. The language was unclear.

Many of the attendees left feeling angry and uncertain — emotions which carried over into Monday’s protest.

Four days later, there are still scant details. Even what was disclosed in the private meeting remains contended.

Nutter’s press secretary Mark McDonald emphasized on the phone Monday that the purpose of the meeting was to discuss “minor” changes to the executive order.

“We specifically asked them if they wanted to submit written comment to do so,” McDonald said. “The purpose [of the meeting] was to solicit input.”

Meeting attendees told AL DÍA didn't see it that way. Several said hat this was a "fast-tracked decision" coming down from the Department of Homeland Security. It was not to be given public hearing as with the original executive order.

"It was not an invitation to engage with the policy," Nicole Kligerman of the New Sanctuary Movement told AL DÍA in an email. "Everyone who spoke at the meeting was against any changes to the policy. Deputy Mayor Gillison said both that those concerns were going to be passed along to the mayor and repeated that the Mayor had already decided to change the order. We hope that the administration takes all of our voices into account and decides to keep the ICE hold policy the same in Mayor Nutter's remaining six weeks in office. We have many people currently calling, emailing, and tweeting into the office to share their outrage at the proposed changes."

Confusion was compounded the vague language of the proposed changes, especially regarding the judicial implications of terms "terrorism" and "public safety." The Nutter administration promised a written draft of the changes soon, but as of Monday evening, no one from City Hall could confirm when it would be released.

McDonald said he was unaware of Monday's protest happening outside City Hall, which involved at least a dozen people who participated in Thursday’s meeting.

Other parties at the rally included the Councilwoman Maria Quiñones-Sánchez, Pennsylvanian Immigration and Citizenship Coalition, a representative from the Arab-American Community Development Cooperation, the interfaith organization New Sanctuary Movement of Philadelphia, and One Love, a Cambodian-American advocacy group.