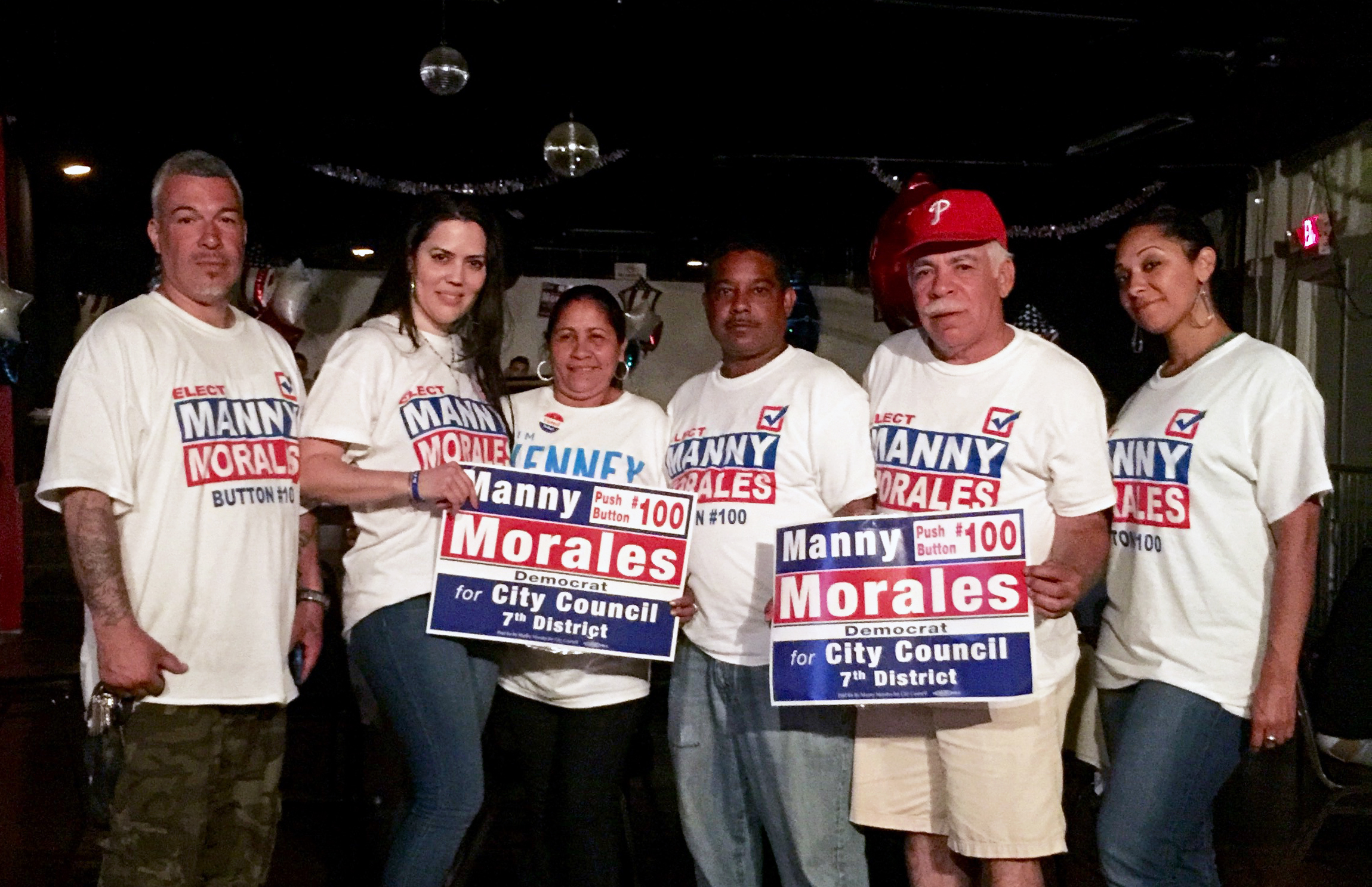 How did Manny Morales get 46 percent of the vote?

There was a heartstopping stretch during last week’s primary election in which Morales, the 7th District Council challenger, held a steady lead over…

This article is the first in a series about the 7th District politics and its constituents.

There was a heartstopping stretch as the votes were counted during last week’s primary election in which Manny Morales, the 7th District Council challenger, held a steady lead over incumbent Councilwoman Maria Quiñones-Sánchez.

Quiñones-Sánchez eventually secured her third term with 53 percent, or 6,510 votes from 7th District residents. Morales got the remaining 46 percent with 5,646 votes. Our headline read “Sánchez victorious, again,” but we could have said “by a remarkably thin margin.”

A block captain, a committee person for the 62th ward, and a former state labor investigator, the little-known Morales announced his candidacy in mid-February. Ward leaders levied a near-unanimous endorsement. The Democratic City Committee (DCC) tapped him shortly after, but it was soon clear that they didn’t vet their candidate as thoroughly as they should have.

Scandal erupted around Morales’ four-year backlog of Facebook posts that showcased a variety of racist, homophobic, anti-immigrant, and ultra-conservative viewpoints. Unable to offer a defense, Morales lost much of his support, and all of his political reputation. He would get no kind word from the mainstream press, and had trouble raising money to mount an ad campaign. It appeared the election would be a cakewalk for Quiñones-Sánchez. It was her third time running without support from her ward leaders and the DCC, and Morales was the least viable opponent to date.

Most people following it in the news probably had to pick their jaws up off the floor. How did Morales, the pariah of the 2015 primary election, get 46 percent of the vote against a seasoned incumbent?

In the last primary election in 2011, against far more credible candidate, Quiñones-Sánchez won by a comfortable 60-40 margin.

Historically, voter turnout in the 7th District has been low. This year’s was slightly better than usual for a primary election, but not nearly enough to attribute Morales’ competitive numbers to an unprecedented voting block coming out of the woodwork.

In the 7th ward, the man whose Facebook page compared gay men to flatworms took 15 of the 23 divisions, with 51 percent of the vote. His biggest victory came in his home ward — the 62nd — where he swung 1,180 votes, or 67 percent. But probably the most significant ward-level victory was in the 19th ward in which Morales won the majority vote in 17 of 19 divisions, with one tie.

This is noteworthy if only because the 19th is Quiñones-Sánchez’s home. She even lost the majority vote in her own precinct.

Meanwhile, the councilwoman still took the overwhelming majority of the wards, including a 71 percent landslide in the 23rd, which may have been spurred by a late alliance with ward leader and former opponent Danny Savage. She also took the wards headed by her other two allies, Elaine Tomlin in the 42nd and Tom Johnson in the 25th.

Endorsement logic can also be applied to Morales’ victories. The three wards in which he was the clear favorite — the 7th, 19th, and 62nd — are led by three of Quiñones-Sánchez’s staunchest critics: Ángel Cruz, Carlos Matos, and Marge Tartaglione.

Political consultants maintain that endorsements mean a lot in City Council races. Quiñones-Sánchez has her earned stripes in City Hall, and her laundry list of political backers in this race included three former Philadelphia mayors. But within her own district, she’s still a polarizing figure. Most of the ward leaders desperately wanted her gone.

What is more telling than Morales’ majority vote in three key wards is the vote breakdown throughout the district. In the 10 miles between the Northeast and the tip of Northern Liberties, he got no less than 28 percent of the vote in any single ward. In at least three wards, the two contenders came within just a few percentage points of each other.

Morales certainly didn’t buy the votes. His campaign raised a modest $22,000 — $14,000 of which Morales marked as a loan on his campaign finance reports. This covered the costs of his small sign-and-circular campaign. Latinos United for Political Empowerment (LUPE), who endorsed both Morales and Jim Kenney, filed a $5,000 donation given to them by the carpenters union. Meanwhile, Quiñones-Sánchez, with over $125,000 by the beginning of May, was able to put up a sharp ad on Spanish TV networks and wage an attack campaign on Morales.

On election day, however, Morales supporters did lead a sizeable get-out-the-vote effort throughout the district. Poll station workers are usually paid to hand out sample ballots and promote their candidate, but how this was funded we won’t know until all of the campaign finance reports come in from independent expenditure groups.

Quiñones-Sánchez’s office was in the  field to monitor voting practices. The councilwoman filed an injunction with the city ethics court about illegal pro-Morales ballots being distributed to voters. She alleged that numerous cases of voter fraud had occurred as well, and that some polling stations were experiencing technical problems.

“I said for weeks someone is going to go to jail after this election,” Quiñones-Sánchez told AL DÍA on election day outside of her precinct's polling station in the 19th ward. “It’s going to happen.”

That was before the numbers came in. Since then, her campaign team has been looking at the data and asking the question of how it came so close. Quiñones-Sánchez cited a “longstanding history of voting irregularities” in the 7th District, including over-voting and assisted voting practices that she alleges were on display again last Tuesday.

“We are examining a suspiciously high number of instances of assisted voting in the Seventh District,” she said in a statement. “My campaign had 60 poll watchers on the ground on Election Day who documented these irregularities and is now working closely with law-enforcement authorities, including the District Attorney's Office and the FBI, to take appropriate action.”

Greg Irving, the City Commissioner’s Office voter-registration administrator, said that the voter histories are still being updated, so they won’t know for another week how much over-voting fraud actually occurred. He said, however, that in his experience, instances are isolated and would never amount to an “astronomical figure.”

Ward politics aside, one 7th District constituent, who asked to remain anonymous, put the race a different way: “How many of Manny Morales’ votes were for Manny Morales, and how many were against María Quiñones-Sánchez? I voted for Sánchez, but it hurt to do it.”

Quiñones-Sánchez’s critics were quick to say the close race is evidence of the growing discontent about constituent services.

“The reason [Morales] got 46 percent of the vote is that the people in the barrio are tired,” said State Rep. Leslie Acosta. “They are ready for some changes. And not only later, but they are ready to hold elected officials accountable. We want services in our community that has been marginalized and neglected for a very long time.”

What exactly is happening in the 7th District?

Zoning meetings have descended into shouting matches with police presence. While some wards have citywide low voter turnouts, there are still people in the community who are far from apathetic. The anti-Sánchez sentiment is palpable in some camps.

Maria Mendez, a real estate agent who lives in the area, came around to Morales despite his ill reputation. Either way, she said she was “one of those people” who would have protest-voted the councilwoman. But Morales won her and others over with his door-to-door efforts around the 7th District throughout his campaign.

She also cited the story about Quiñones-Sánchez employing eminent domain as the turning point. (Even the media reported this story from different angles. For an alternate perspective, read the Next City investigation.) Some residents were so upset that they marched on the councilwoman at her home (shown above).

Mendez says if things don’t change, the next candidate will be far more viable than Morales.

“Either this is a wake up call for her that people are angry, or she’ll be arrogant and continue in the same route,” Mendez said. “And if she doesn’t change, she’s going to be out in four years. Because of what happened with Manny, they are going to prepare way in advance next time.”

How Quiñones-Sánchez got 54 percent of the vote

This is not to sell the Councilwoman’s votes short, though, let alone her third historic victory without DCC support. Even heavy political opposition couldn’t stop her from securing the majority vote in six wards whose leaders backed her opponent.

Whether it was because they believed in her work or she was the better candidate, 54 percent of district voters cast their ballots for her last week. Quiñones-Sánchez has been lauded as a councilmember who legislates both citywide and within her service area — with a long resumé of constituent service work.

It’s difficult to say how different the outcome would have been if Quiñones-Sánchez had more ward-level allies.

This race saw at least one fence mended with the support of Danny Savage. It is remarkable not only because Savage was Quiñones-Sánchez’s two-time opponent running for Council, but also because of his connection to the DCC loyalists who have for so long tried to oust the councilwoman.

Quiñones-Sánchez hopes to continue this mending process throughout her third term.

“I am grateful for the support I received from a large number of ward leaders and other community leaders, especially former Councilman Danny Savage, who believes in my record and devotion to the Seventh District,” she said. “We need to end the divisive, machine politics of the Seventh District and build bridges in our community.”

In terms of the close race, Larry Ceisler, a political analyst, weighed in from a different angle, noting that the 7th District Council seat has been highly competitive since the 1980s, and Quiñones-Sánchez is an effective civil servant who poses a threat to the status quo.

“While I know her heart and her first interest is obviously with her district, she is playing on a citywide stage,” Ceisler said. “There are people uncomfortable with that. They’re uncomfortable with a very bright, articulate Latina being a force in the city. She stands out in City Council...She could potentially run for mayor.”

It is interesting to note that a considerable number of her base came from Latino voters.

Israel Colón, an independent consultant who is conducting a separate analysis of the district’s voter turnout, said that Quiñones-Sánchez won the majority of Latino votes in divisions that had more than 51 percent voting-age Latinos.

“You can argue that even though it wasn’t by a significant amount, she won the Latino vote, even if she lost the 19th ward,” Colón said.