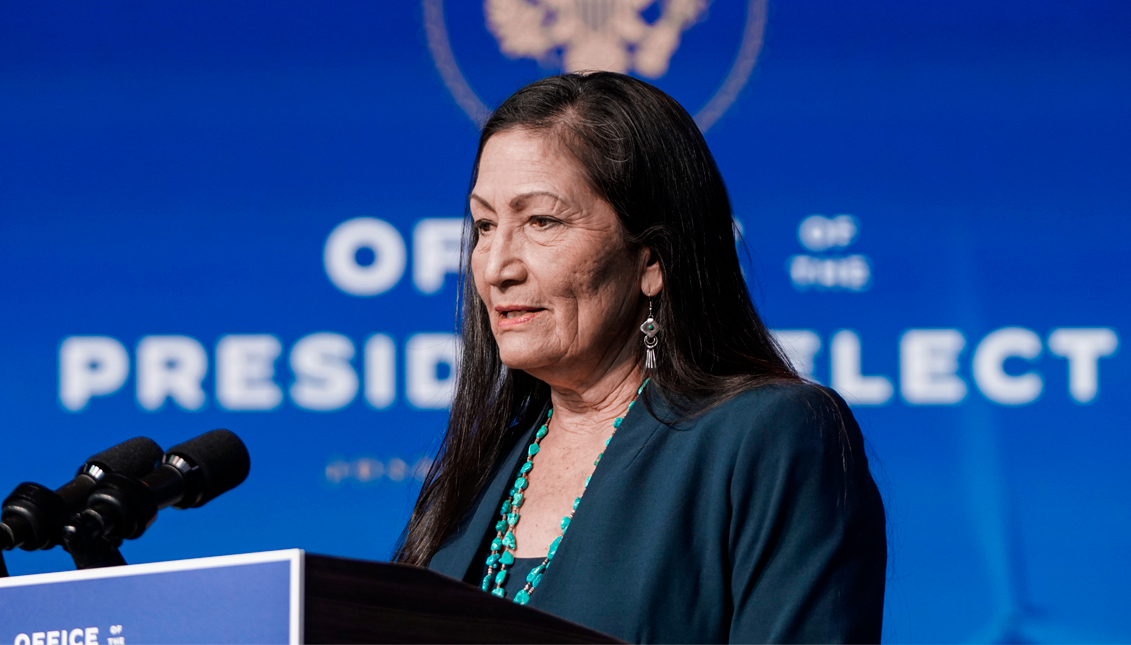 Rep. Deb Haaland's confirmation hearings to become Secretary of the Interior are set to begin this week. Photo: Getty Images

New Mexico could send a new Latinx rep to Congress should Biden’s new Secretary of the Interior nominee be confirmed.

When President Joe Biden selected Rep. Deb Haaland (NM-1) as his nominee for Secretary of the Interior, a new slate of candidates began efforts to replace her should she be confirmed by the Senate.

Haaland’s confirmation hearings are scheduled for this week. If she is confirmed, she will resign from her House seat, setting in motion a special election to fill the vacancy to represent her district, which represents most of Albuquerque, New Mexico.

It would require New Mexico to conduct a primary election whenever a member of Congress leaves their post. As things stand, the New Mexico secretary of state calls for a special election after a seat vacancy, and then party leaders choose their candidates. Bill advocates say it would put the election in the hands of voters rather than parties.

The bill cleared its first committee on Feb. 15.

If it passes, it would mean New Mexico’s 1st Congressional District could go several months without representation, but it also gives candidates vying for Haaland’s potential spot more time to spread the word on their campaigns.

About a dozen candidates — Democrat, Republican and Independent, have declared their intent to seek Haaland’s seat.  Among them is a new slate of four Democratic Latinx candidates who could strengthen representation in New Mexico’s leadership.

New Mexico State Senator Antoinette Sedillo López, Victor Reyes, who could be the first LGBTQ person to represent New Mexico in Congress, and State Representative Patricia Roybal Caballero, and Selinda Guerrero, a community organizer who would also the be first Queer representative from New Mexico.

It is also notable that Georgene Louis, a five-term New Mexico State Rep and member of the Acoma Pueblo, is the only non-Latinx Native candidate running to Replace Deb Haaland.

López grew up in New Mexico and has dedicated a large portion of her life through both grassroots activism and civic change.

As a state Senator for N.M. State District 16, she addressed the lack of state regulations on hydraulic fracking, and introduced a bill to pause the issuance of a new permit to allow regulators to identify impacts hydraulic fracking has on her constituents’ health.

López is an outspoken advocate for the Green New Deal, Medicare for All, and raising awareness around domestic violence in Latinx communities.

She also touched on financial corruption within political campaigns, calling for major reforms, andcalled to mind the long-standing issues the pandemic has only laid bare.

“We can see from the millions of people suffering from hunger and housing insecurity that we need to address the root causes of poverty by raising the minimum wage, ensuring universal healthcare, providing ample mental health and social service support for all people in our country,” she said.

“We can see from what has been happening at our borders that we need comprehensive and compassionate immigration reform including providing a real path to citizenship," she said.

Since the start of her campaign, López has taken pledges to take no corporate PAC money, no fossil fuel money, and no NRA money.

“I am ready to represent the people of New Mexico’s 1st Congressional District, because I have not only seen the challenges our communities face, I’ve lived them,” Reyes told AL DÍA.

Reyes considers himself to be the next generation of progressive leadership in New Mexico.

“Often as the youngest person, the only LGBTQ+ person of color in the room, I have unapologetically rolled up my sleeves to get to work for our state,” he said.

He also served as the chair of New Mexico’s Community Development Council, and oversaw millions of dollars of federal funds to be invested in the state’s infrastructure.

“Through hard work and community organizing, not compromising or settling, I have delivered real successes at every level for the people who needed it, when they needed it. New Mexicans can no longer wait for business as usual, they need someone to bring that urgency to Washington,” he said.

If elected, Reyes would be the first LGBTQ+ member of Congress to represent New Mexico in the Capitol.

Before running for office was even an option, Caballero’s fight was for social justice for decades. Recently, she has been the leading voice in progressive policies as a member of the New Mexico House of Representatives.

“On her father’s side through the Cacique lineage to the Piro Manso Tiwa Tribe, Pueblo of San Juan de Guadalupe, in Las Cruces, and on her mother’s side through Spanish and Mexican lineage for generations,” her campaign website reads.

As a labor organizer, shop steward and international representative, she has worked alongside Dolores Huerta and several grassroots and activist groups.

Especially during a pandemic, raising the minimum wage has been a huge issue for her.

“I’ve spoken to single moms in my district when the pandemic broke and they were petrified because they could not work their two, or more, part-time jobs at $7.50/hr. I know how they felt because I was a single mom for a time too. I worked during the day and cleaned hair salons after going to evening school at night just to be able to pay the rent and childcare for my son,” she told AL DÍA.

Caballero said social justice has been much more than just a “slogan” all her life, and that New Mexico’s 1st Congressional District reflects a diverse population — “brown, Black, Native, anglo and more — who work hard and deserve justice, dignity and respect.”

She said she’s also fighting for the $15 minimum wage — a tense topic since Biden assumed office — and more.

“That’s why as a legislator I’ve been an uncompromising progressive voice, fighting for the $15 an hour minimum wage, community solar, police accountability, community solar, immigrant rights and voting rights. Undoing the damage the Trump Administration caused takes more than dedication; it takes movement builders in Congress, and that’s why I’m running.”

The hardships the pandemic has placed on BIPOC communities throughout the last year have been heavily felt by Guerrero. Her family was evicted from their home because of pandemic-related financial issues, but she is still pushing to represent her community in Congress.

“My family was evicted from our home of three years this summer, my partner was a political prisoner most of this past year. We lost three of our five incomes in our home during the pandemic,” her campaign website reads.

Guerrero says she believes these conditions require a working class, BIPOC and Queer candidate to run for office. She is a Black Lives Matter and human rights activist, as well as the precinct chair of the Democratic party in her community and current State Central Committee member.

More than ever our people need free healthcare, free education, free transportation, affordable housing & sustainable union jobs. Our democracy needs to work for our working poor & free them from state violence. We must also respect our humanity & our right to self determination.

To Guerrero, who has lived in NM-01 all her life, the chance to represent her community would only be the right choice.

“I have lived here all my life, I am an organizer with my people from this district, the people of this district know me and I know them. These are the factors that make me the right candidate to represent the voice of Congressional District 1,” she says on her site.