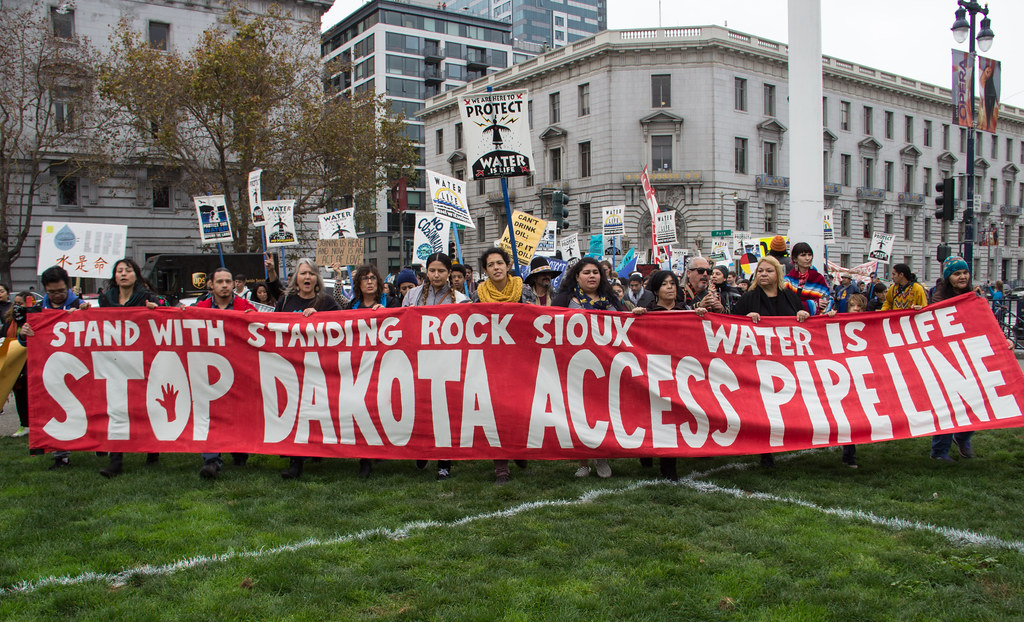 The future of the Dakota Access Pipeline hangs in the balance

A virtual meeting on Friday, April 9 will determine whether the pipeline can continue operating without a permit.

On Friday, April 9, the Justice Department, Energy Transfer LP, and Native American tribes are set to meet virtually at 2 p.m EDT in the U.S. District Court for the District of Columbia, where government lawyers are expected to announce whether the Dakota Access Pipeline (DAPL) will shut down.

Since the very beginning, tribal and environmental advocates have aggressively fought against the construction of DAPL, as it would be built on sacred Native land. It also has the potential to pollute the water source of the Sioux people on the Standing Rock Indian Reservation.

Indigenous communities are still fighting to protect their land and water from dangerous crude oil pipelines. This week there are solidarity actions across the country to demand @joebiden #StopLine3, #ShutdownDAPL and #BuildBackFossilFree.

Advocates view the pipeline debate as a way to evaluate President Joe Biden’s commitment to indigenous rights as well as environmental justice. On his first day in office, Biden effectively cancelled the Keystone XL pipeline through an executive order.

However, a complete shutdown of a major, in-service oil pipeline would be an unprecedented decision. It would welcome more litigation and irritation from the oil industry, Republicans and some labor interests.

Dakota Access is an Energy Transfer LP pipeline that’s been in service for four years, and it moves crude oil roughly 1,200 miles from North Dakota oil fields to a hub in Illinois.

In 2016, the project received permits from the Obama administration, but a final easement was withheld, and the administration agreed on a review after tribes and environmentalists staged protests that lasted for months.

The Standing Rock Sioux, Cheyenne River Sioux, and other neighboring tribes have been challenging federal approval of DAPL since its conception in 2016. They failed to block construction, but did gain some smaller wins along the way.

The most notable victory was won through a federal District Court judge named James E. Boasberg. Last year, he ruled that the Army Corps of Engineers violated the National Environmental Policy Act when it approved the pipeline.

Boasberg then dismissed the federal easement, ordering it to shut down while the government conducted a more expansive review of the oil spill risks it posed to the land and the surrounding communities.

So far, the Biden administration has been reserved in speaking about its plans for the future of the DAPL.

In a press conference on Thursday April 8, White House Press Secretary Jen Psaki said the administration is assessing individual pipelines and gauging the “costs and benefits on the environment and jobs.”

The White House is facing intense pressure from local tribes as well as their devoted allies, who insist that permitting the DAPL to remain in service would be reckless and unlawful. Yet, the state of North Dakota, Energy Transfer LP and at least one other tribe, the oil-producing Mandan, Hidatsa and Arikara Nation, claim that a shutdown would create economic chaos.

Needless to say, the administration finds itself in the middle of a fierce political fight: one that involves economics, environmental issues, and indigenous rights.

If it doesn’t wade into the fight, it will face indignation from Democrats, environmentalists and Sioux tribes.

But if it does decide to intervene, the White House must brave the possibility of further alienating Republicans, who have attempted to depict recent actions Biden has taken as contributing to a so-called “war on energy.”

In Early February, 33 Democrats wrote to Biden, urging him to close down the pipeline, stopping it from transporting crude oil between North Dakota and Illinois.

“By shutting down this illegal pipeline, you can continue to show your administration values the environment and the rights of Indigenous communities more than the profits of outdated fossil fuel industries,” they wrote.

Indigenous activists and celebrities, like Shailene Woodley, Josh Gad and Leonardo DiCaprio, encouraged the administration to do the same.

At the same time, congressional Republicans are supportive of the pipeline and are likely to oppose any moves to disrupt it.

Indigenous communities say that besides posing major risks for oil spills, the DAPL is a blatant case of racism and injustice.

Indigenous youth rallied in the nation’s capital on April 1 to demand the halting of the DAPL as well as the Line 3 project, which carries oil from Canada to Minnesota.

In a statement, the Indigenous Environmental Network (IEN) focused on Biden’s infrastructure proposal, claiming that it has a “major oversight: it neither acknowledges nor strengthens tribal sovereignty.”

“Congress and the Biden administration must know that recovery cannot take place until Tribal nations are the ones making the decisions about projects that impact their peoples and their lands,” IEN stated.