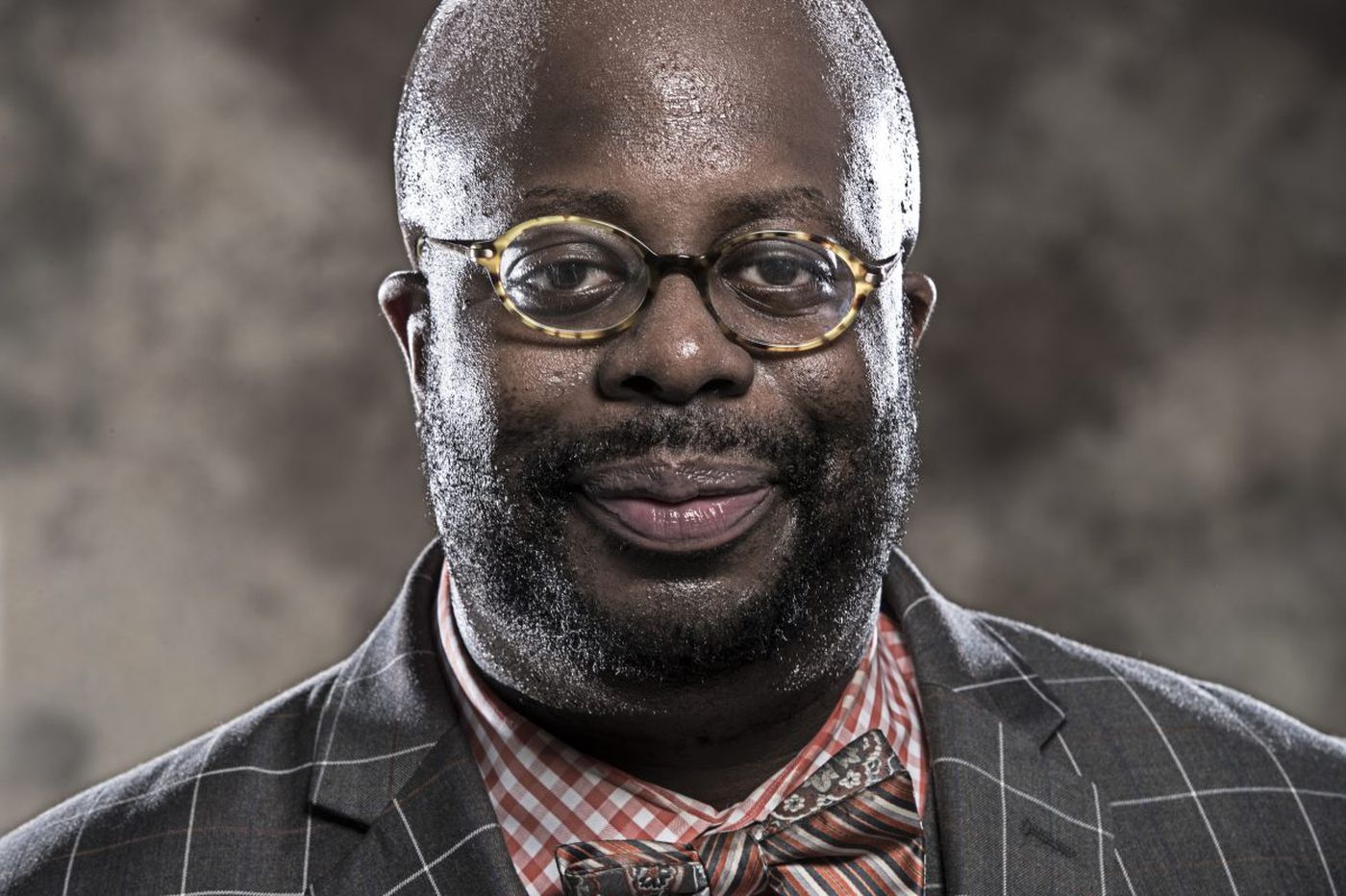 Chad Dion Lassiter took over as Executive Director of the PA Human Relations Committee a year and a half ago. Photo: Michael Bryant/The Philadelphia Inquirer.

Chad Dion Lassiter has given PA’s commission tasked with combating discrimination a much-needed boost at a critical time in history.

Back in 1999, the Pennsylvania Human Relations Commission (PHRC) was a lot different than it is now. When current chair Joel Bolstein joined that year, the staff of the commission numbered more than 200.

Led by civil-rights icon, Homer Floyd, PHRC was leading not just Pennsylvania’s fight against all forms of discrimination, but the nation’s.

“Homer kept the PHRC out in the forefront,” said Bolstein.

In an amendment from 1970, the PA Human Relations Commission as it’s known today was born.

It’s comprised of 11 commissioners, with one acting as the chairman. They are nominated for their spot by the governor and serve five-year terms. None of the commissioners take a state salary and are a diverse set of private and public citizens with backgrounds in law, nonprofit and politics.

They are reported to by an executive director, who gets a state salary and runs the day-to-day operations.

“This is a staff-driven commission,” said Bolstein.

He mentioned how other chairpeople in the past took different approaches to their roles, but viewed his commission’s relationship with the executive director as similar to a CEO’s with a board of directors.

“I just make sure they’re doing the best that they can do and that they’re giving every person who works for PHRC an opportunity to do their best work,” said Bolstein.

Floyd was the first and only executive director of PHRC for more than 40 years. When he retired, he left a major hole in the commission, and one that would take significant time to fill.

The loss of an icon… and funds

In addition to Floyd’s departure, the commission had also begun losing a significant amount of its staff because of a lack of funding.

The staff dropoff started towards the end of Floyd’s tenure, but hit a low the year after his retirement and continued falling when Governor Wolf took office.

“At one point last year we were down to 76 employees,” said Bolstein.

Bolstein credits the lack of state funding to rising pensions and other benefits for state employees over the years, but also mentioned a drop in federal funding.

The drop there is a result of not being able to complete enough work for federal agencies that also often fund the work like the EEOC.

Manpower is something any organization needs to conduct its work, but PHRC’s situation is especially important because of the kind of work it does dealing with sensitive and often multi-layered cases of discrimination.

Bolstein says many of the current staff have “triple” the caseload compared to the past.

“I think it’s unreasonable to expect somebody to be able to work that quickly when a lot of these discrimination cases require a significant amount of investigation,” he said. “They’re not all black and white, they’re various shades of gray.”

Especially in the current national political climate, Bolstein’s ultimate challenge is how “to do more with less.”

Such circumstances require a dedicated leader committed to listening to others.

For 40 years that leader was Homer Floyd, but six years after his retirement, the PHRC still struggled to find a similar figure amid a haze of controversy.

In the seventh year, they found their man in Chad Dion Lassiter.

“Chad is the best thing to happen to PHRC in the 20 years I’ve been here,” said Bolstein.

A North Philadelphia native and national expert on race relations, Lassiter’s appointment is the culmination of a life’s work that’s led him across the country and world to confront institutional racism and develop support systems and solutions for the people of color subject to them.

In addition to being a professor, he is also the co-founder of Black Men at Penn School of Social Work, an organization that recruits black men into social work, and formerly sat on the Board of Trustees of the Philadelphia Prisons and Board of Directors at the Community College of Pennsylvania.

Rather than dwell on the past and lack of funding, Lassiter jumped right into the work to see how he could “do more with less.”

One of those avenues was to create the “beloved community” wherever hate struck across the Commonwealth.

This type of engagement is in the vein of Lassiter’s aforementioned influences and develops relationships across the spectrum of privilege in a community that support battles against institutional racism.

“You build it with allies from every side of the color line and gender line,” said Lassiter.

In York County, Pennsylvania, he put his training to the test after a series of racist incidents traumatized three townships. His path to forging the “beloved community” was three town halls involving different stakeholders in each municipality who could “speak back to the shadow of hate.”

The issues were complex, but the message was simple.

“No Hate in Our State,” said Lassiter, which was also the banner for the town halls.

The conversations were necessary, albeit difficult, but even in dissent, the “beloved community” still prevails.

In one instance at the first town hall, an individual spoke as a purported member of the local KKK. Those in attendance were quick to try to shut the man down, but Lassiter intervened to allow him to speak.

“No Hate in Our State”, was a success in its first rendition and PHRC has since gone on to implement it in Carlisle and Hanover, PA where more healing was needed.

Where the town halls created a very localized conversation among different parts of a community, Lassiter has also used his nationwide connections to bring the national conversation to PA’s doorstep through a new Social Justice Lecture Series.

So far, the series has featured discussions with some of the nation’s leading thinkers on the subject such as author and activist Tim Wise, academic and radio host Michael Eric Dyson, author Robin DiAngelo and #MeToo founder Tarana Burke.

“The purpose of the PHRC Social Justice Lecture Series was to inform, to inspire and to enlighten,” said Lassiter.

Further plans in the series look to bring in the likes of Cornel West to impart more wisdom.

The final way Lassiter has a transformed PHRC is in its approach to collaborating with other departments and organizations in the state.

For one, he hired Guerline Laurore in a new position of Director of Policy and Intergovernmental Affairs.

In that role, Laurore is in charge of implementing all the strategies put forth by Lassiter and communicating them to all the involved governmental agencies, whether they be local, state or federal.

“You could say that I’m the primary relationship manager of the agency,” said Laurore.

Through those relationships, she develops partnerships and collaborations between PHRC and other government organizations to develop further strategies and solutions.

The latter in particular is a point of emphasis for Lassiter given his previous experience interacting with prisoners and their families.

John Wetzel, PA’s Secretary of Corrections says the partnership is one that has been a long time coming because of the justice system’s propensity (especially in PA) to lock up people of color.

“It’s a natural partnership,” he said.

The relationship started with a series of listening sessions with the families of prisoners.

“We wanted to find out what we can do better,” said Wetzel.

They learned that small things can make a big difference, like having arts and crafts in the visiting rooms, so children can play with the parents they are visiting.

“As a result, we’re one of the first states in the nation to mandate arts and crafts in visiting rooms,” said Wetzel.

He admits the partnership is still in its early stages, but what it’s accomplished so far is “promising.”

Looking ahead, the DOC and PHRC are also conducting classes at PA’s women prisons geared towards the reentry of Philadelphia women coming from prisons across the state.

According to statistics cited by Wetzel, 75% of them are the custodial parents to their children, meaning their effective reentry is key to success for not only themselves, but the children they raise.

Wetzel also discussed a pilot program taking place in an unnamed school district to offer the children of incarcerated parents support given their circumstances.

Regarding current issues, PHRC is actively involved in supporting new immigrant populations that are entering the state.

For one, it’s partnered with the Governor’s Advisory Committee on Latino Affairs to offer support in educating about the importance of the census and is doing outreach to combat xenophobia in areas where the demographics reflect the influx of a large Latinx population.

It is also active in pushing for further amendment to the PA Human Relations Act to include banning discrimination based on sexual orientation or gender identity to offer more support for members of the LGBTQ community facing discrimination.

In looking back at the year-and-a-half of work he’s put in at the commission, Lassiter finds himself “overwhelmed at times with raw and genuine emotion” for the support he’s received.

It’s come from as high up as Governor Wolf, but equally as impactful is that which comes from members of PHRC’s staff.

“It’s not an agency that can pay the staff what the staff is worth,” said Lassiter.

As a man of faith, Lassiter often credits God for his place in the world.

In times such as these, where xenophobia, racism and sexism runs rampant in the highest office in the U.S. and is often spewed across television screens, it’s hard to argue that God could have found a better place for him.

For those doubting the continued work of PHRC with him at the helm, his reply is simple:

“Their arms are too short to box with God,” said Lassiter.