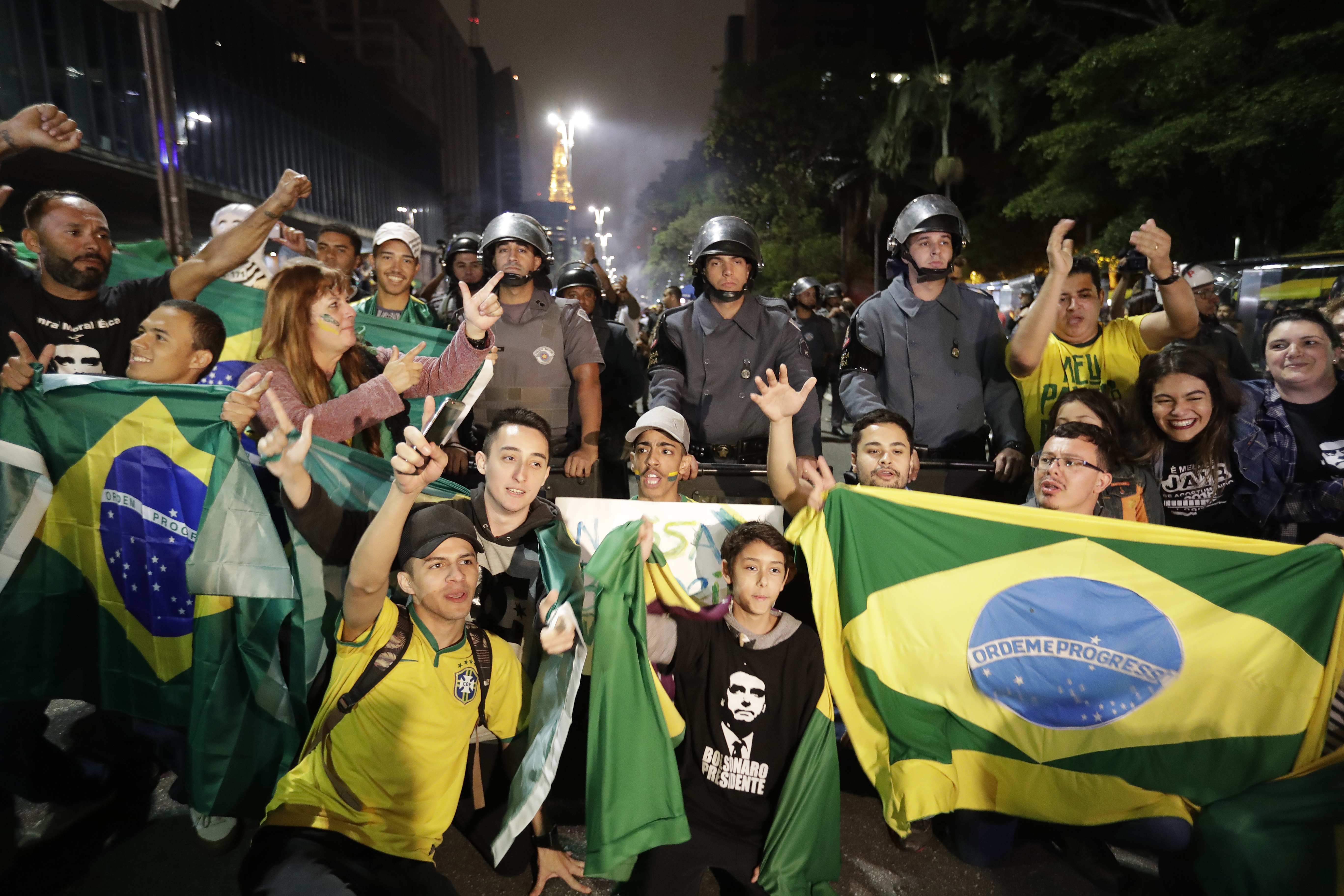 Ultrarightist Jair Bolsonaro handily won the Brazilian presidential run-off on Sunday with 55.42 percent of the valid votes and will succeed President Michel Temer on Jan. 1 to govern until 2022.       According to official results, with 97 percent of the votes counted, Bolsonaro has clinched the presidential vote, soundly defeating Workers Party (PT) candidate Fernando Haddad, who has garnered 44.58 percent of the votes.       Bolsonaro celebrated his victory on Sunday, saying in his first public remarks after learning of his win that "Together we're going to change Brazil's destiny. We knew where we were going. Now we know where want to go, my dear Brazilian people. Many thanks for your confidence."       The reserve army captain, who has been a supporter of and apologist for the country's 1964-1985 military dictatorship and is well-known for his openly-expressed racist, macho and homophobic opinions, had led all the voter surveys for months and won a plurality in the first electoral round on Oct. 7.       Haddad began his campaign only on Sept. 11, when Brazil's judiciary ruled that former President Luiz Inacio Lula da Silva, with the PT but serving a 12-year prison sentence for corruption, was ineligible to contest the election.       In the first electoral round, Bolsonaro garnered 46 percent of the votes, with Haddad coming in second in a field of 13 candidates with 29 percent.       On Sept. 6, during the first round campaign, Bolsonaro was stabbed in the abdomen at a political rally and remained hospitalized for 23 days, undergoing two operations.       Since that time, he has limited his election activity to the social networks and did not even participate in any of the four television debates with Haddad that had been anticipated during the run-off campaign.       Haddad criticized that position, in particular because doctors had said that Bolsonaro could participate in the debates.       Bolsonaro, 63, has been a lawmaker for almost three decades and was elected president as the representative of the Liberal Social Party (PSL), a small party until now, but which in the Oct. 7 legislative election garnered 52 of the lower house's 513 seats.       The PSL will only be exceeded in the new legislature by the PT, which will hold 56 seats in a completely fragmented parliamentary chamber in which 30 parties have seats, most of them having expressed support for Bolsonaro.       Bolsonaro's running mate - and now vice president-elect - is reserve army Gen. Hamilton Mourao, who has extolled Brazil's military dictatorship in his campaign speeches.       The new president-elect, in his own campaign speeches, has promised to take a hard line against crime and to allow civilians to buy firearms, along with announcing a neoliberal line on the economy including privatizations of state-run firms and a significant reduction of the size of the state.       Meanwhile, former Sao Paulo Mayor Joao Doria, a businessman with little political experience, on Sunday won the gubernatorial run-off vote in the same-named state, maintaining the hegemony of the social democrats in Brazil's richest and most populous region. Doria garnered 51.73 percent of the votes to Brazilian Socialist Party candidate Marcio Franca, who received 48.27 percent.       And former Judge Wilson Witzel, with the Christian Social Party, who had received Bolsonaro's support, won the run-off election for the governorship of Rio de Janeiro state with 59.8 percent of the votes over Eduardo Paes, who had been the city of Rio de Janeiro's mayor during the 2016 Olympic Games.[ad]