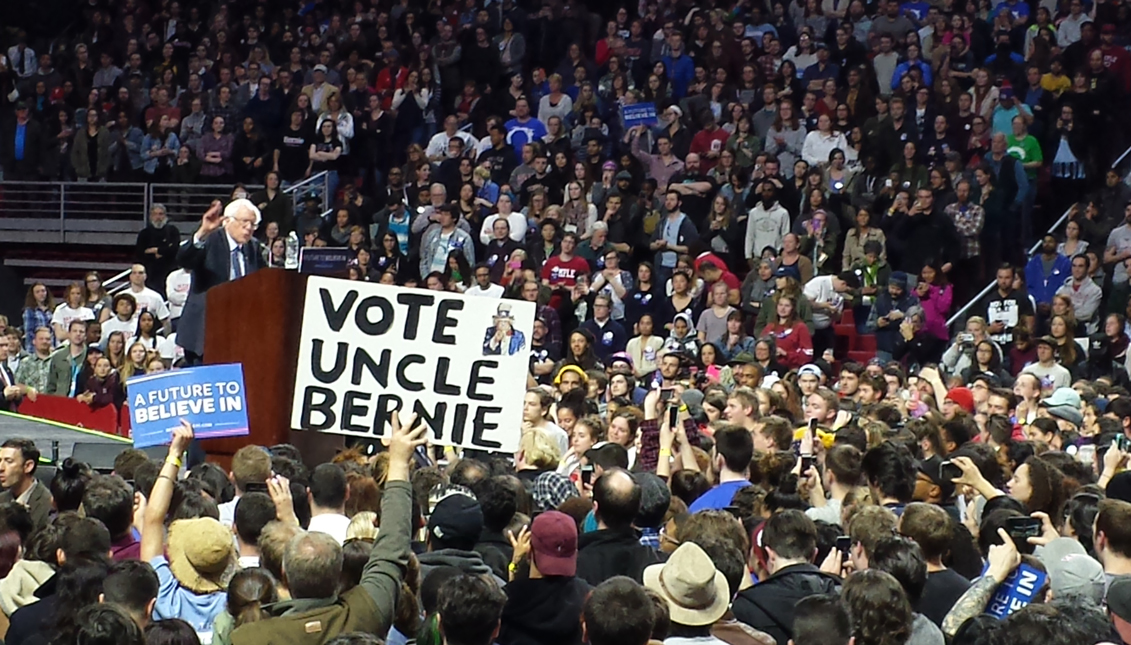 His appearance at Temple University brought out a crowd of over 10,200 people and forced an overflow crowd at the nearby volleyball court.

Holding one of his usual campaign rallies last night at Temple University, Presidential Candidate Sen. Bernie Sanders brought over 10,200 people out to The Liacouras Center. Some spent almost all day in line waiting to hear Sanders speak.

The event marked the first time the candidate spoke to such a large crowd in Pennsylvania. Sanders held a rally in Pittsburgh last week that brought out some 8,500 people.

During his visit to Philadelphia, Sanders also spoke to a much smaller group at the Tindley Temple United Methodist Church in South Philly. Afterwards, he headed to the throngs of supporters waiting for him at Temple U. The line for the rally wrapped around the center and then went down Broad Street for almost six blocks.

Line for the @berniesanders rally at the Liacouras center goes around the block. pic.twitter.com/zO2Fb0Rcne

Then it warps thru a wormhole ending on the other side of Cecil B Moore. pic.twitter.com/RotBrLRqOU

Thought the event was slated to start at 8 p.m., the long queue had formed hours before. Canvassers, politicians and Philly "personalities" roamed around the block talking to those in line for Sanders. Many took advantage of the large crowd and began hocking their Bernie wares and even food while folks waited to file in.

Politicians out in force campaigning along the line. Here's @JohnFetterman. pic.twitter.com/YkjUgnjt7Z

#PhillyJesus was also walking around the line for @berniesanders at the Liacouras center. pic.twitter.com/t6EQvaZqPr

People continued lining up into the evening. Event organizers eventually cut the line off and moved the remaining people into the McGonigle Hall volleyball court where Sanders held a shorter version of his stump speech for the overflow crowd. Once he made his way to the main event, he was introduced by Philadelphia Sen. Arthur Haywood who endorsed him last month.

I have decied to stand with @berniesanders, his mission and the political revolution -Haywood

Once Sanders got up on the podium he delivered what has become his staple campaign speech. Touching on campaign finance reform, the war on drugs, developing inner city neighborhoods, student debt, etc.

.@berniesanders said he doesn't believe possession of marijuana should be a federal crime. "Marijuana is not heroin. That's for sure."

"Welcome to the club." After asking who has student debt. @berniesanders

.@berniesanders says if Congress doesn't do the job of immigration reform he would use executive powers to fix problem. #BernieinPhilly

The part of his speech that made the most headlines was when he called fellow Democratic Presidential Candidate Hillary Clinton unqualified to be president.

On Clinton: "I don't think if you are qualified if you get 15 million dollars from Wall Street through your super pac." @berniesanders

Sanders spoke for about an hour last night. The candidate stayed in Philadelphia over the night and spoke at the AFL-CIO Convention earlier today. Clinton spoke at the same convention yesterday as the two candidates held dueling appearances in the city. Latest polls show Clinton still leading over Sanders but observers have said the margin is becoming smaller as the candidate builds momentum from his recent primary and caucus wins.