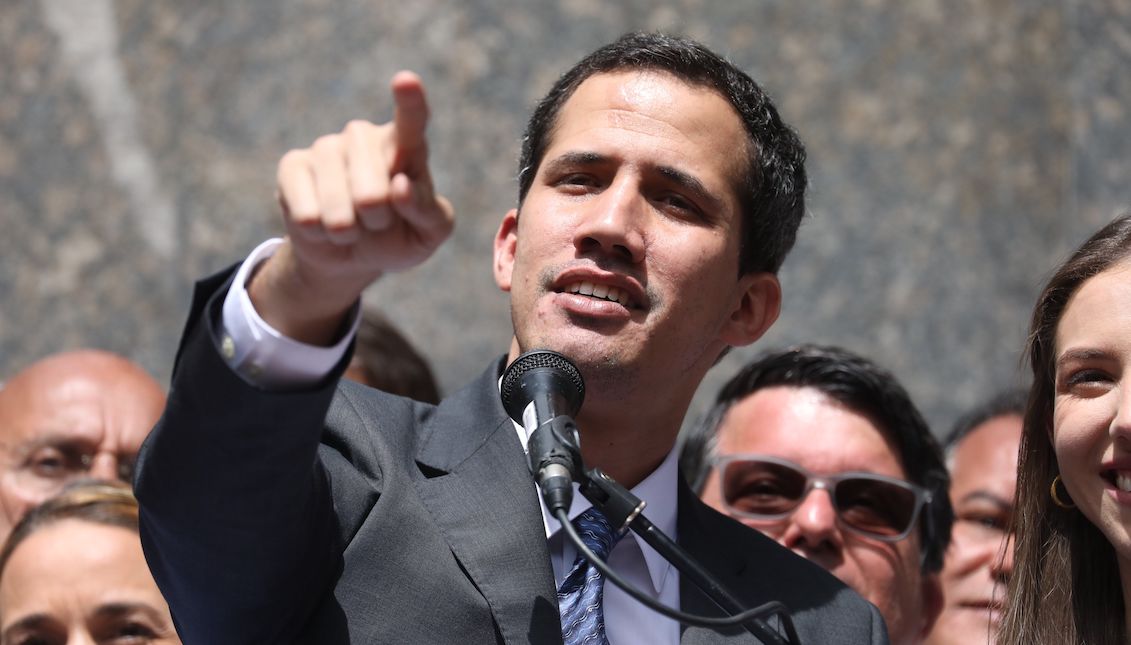 The leader of the Parliament, and president in charge of Venezuela, Juan Guaidó (C), speaks last Friday in his first public appearance since his oath before thousands of people, in a plaza in the east of Caracas (Venezuela). EFE/Miguel Gutiérrez

What does Venezuela mean for Trump?

The White House's intervention in one of the most serious humanitarian crises in the region has unleashed all kinds of political posturing. The true intentions…

On the 61st anniversary of the fall of the military dictatorship of Marcos Pérez Jiménez, the Venezuelan people followed the path marked by a new opposition, and were able to corner president Nicolás Maduro to force a regime change, and a transition to democracy.

For international observers, the swearing in of the president of the National Assembly, Juan Guaidó, as interim president of the nation has been difficult to understand, given the heir to the regime of the Chavez revolution has been a master at disguising his administration's dictatorial features.

It was the White House's immediate support for Guaidó that triggered alarm at the possibility that the U.S. was again open to militarily intervene in the affairs of another Latin American country.

Though most of the international community has for months condemned the humanitarian crisis detonated by Maduro's "dictatorial" administration, and has recognized the country's new leadership,  it was the stance taken by the White House that placed a heightened level of pressure on Miraflores.

However, over the weekend, the UN Security Council acted as the thermometer of the situation at the international level, when members such as China and Russia elected to side with Maduro, rejecting what they called American "interference.”

While President Trump hasn't ruled out any option when it comes to Venezuela, his strategy has so far been maintained in diplomatic efforts to deny the Maduro regime any access to international assets, in addition to reinforcing sanctions against individuals of his government.

"What we’re focusing on today is disconnecting the illegitimate Maduro regime from the source of its revenues," Bolton told reporters on Thursday. "It's very complicated. We’re looking at a lot of different things we have to do, but that’s in the process."

According to the Washington Post, the State Department instructed the Federal Reserve to recognize only Guaidó as the "official representative of Venezuela," which would mean “only he can access whatever funds Venezuela has in U.S. possession.”

Especially for the Venezuelan people, the U.S. move seems to be a gesture of goodwill, in the anxious expectation of a definitive change that would allow for the entry of humanitarian aid and, in the long term, the restructuring of democracy.

But, why would a president with open sympathies for regimes like those in the Philippines, Saudi Arabia and Russia, suddenly decide to lead the campaign against Nicolás Maduro?

One hypothesis could be the government's strategy to regain the support of the Hispanic community in key states such as Florida, where the president enjoys less than 13 percent approval.

Perhaps that is why Rubio and other state politicians were the first to request a meeting with the Trump's national security team over the past week, in an effort to convince the president to side with the Venezuelan opposition.

While it is true that Trump has maintained a particular antagonism with the Venezuelan regime since the beginning of his tenure, the sudden involvement of his administration in the process continues to raise suspicions.

Nicolás Maduro's statements against the United States were echoed by governments such as Russia, which describe Trump's move as an "attempted coup d'etat,” especially after his administration assigned Elliott Abrams as special envoy for Venezuela.

Abrams is known as the "undersecretary of dirty wars" in the U.S., a title earned after his participation in the Reagan and Bush administrations. He was key in disastrous situations such as the civil war in El Salvador, the financing of Contra rebels in Nicaragua, and even the war in Iraq.

What happens from this point on will depend on multiple factors, among them the decision by the Venezuelan Armed Forces whether or not to support the legitimacy of Guaidó's declared presidency and the Maduro administration voluntarily surrendering power.

For the good of the Venezuelan people and the surrounding region, this approach would be the most appropriate to avoid further bloodshed and violence, especially before a U.S. government that, by tradition, will seek a "Savage War of Peace" to distract his nation from its own failures.