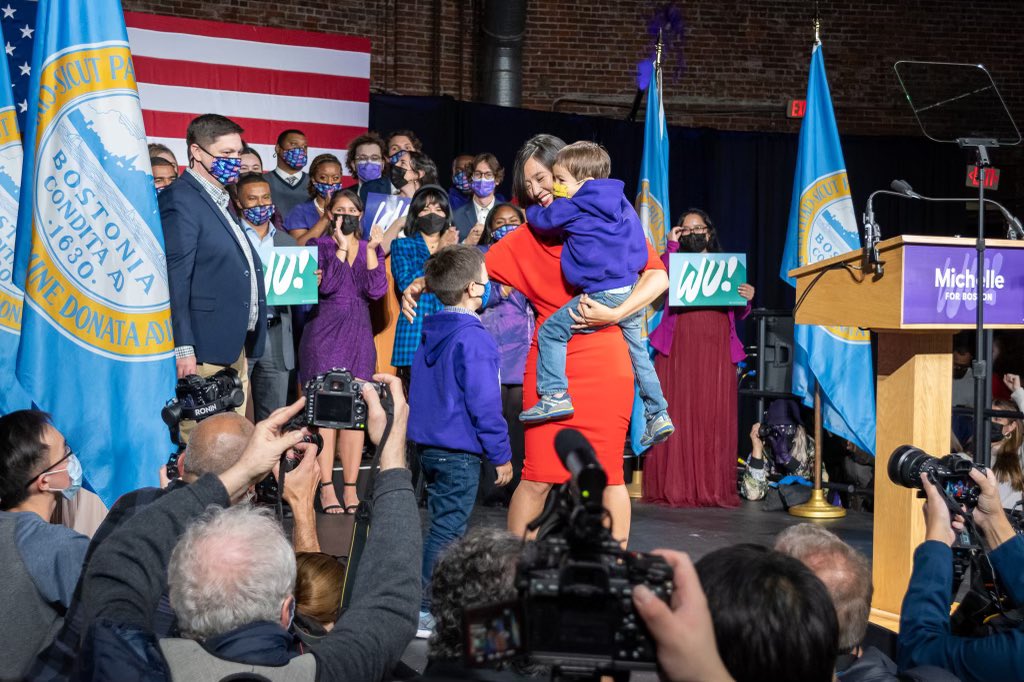 Michelle Wu will be the first Mayor of color in Boston's history. Photo: Twitter- Michelle Wu

Local leaders of color still made history during the 2021 elections

Michelle Wu is the new face of Boston politics after an entire existence of it being white men. Eric Adams is also only the second Black mayor in NYC’s history.

“We are ready to become a Boston that doesn’t push people out, but welcomes all who call our city home. We’re ready to be a Boston where all can afford to stay and to thrive,” Wu said.

Wu made history once before in 2016, when she became the first Asian-American to serve as president of the City Council, securing several key endorsements during her campaign, including from both of the state’s U.S. Senators, Elizabeth Warren and Ed Markey.

Michelle is family. From teaching her in law school, to working together on my first Senate run, to supporting her campaigns, I’ve seen her positive energy, her good heart, and her ability to make big change for Boston. She will be a terrific mayor. Congratulations @WuTrain! pic.twitter.com/hQ17cSuO8K

Wu’s historic win comes at a time when Boston’s demographics have undergone a transformation over the last decade. The city’s white population decreased, while overall population grew roughly 9.7%, according to 2021 census data.

In particular, the Asian and Hispanic communities experienced significant growth. Though Boston remained one of the last Northeastern cities to never have elected a person of color, its politics had become more diverse in recent years, with the City Council being made up primarily of women and people of color.

Wu’s campaign focused on equity issues such as rent stabilization, free public transit, and closing the racial wealth gap. According to a poll conducted by Suffolk University, Wu fared better among all racial groups, including Hispanic, Black and Asian voters.

Wu’s victory is of major significance to the Asian-American community, a group that has been underrepresented among mayors of U.S cities. According to the Asian Pacific American Institute for Congressional Studies, only six current leaders of America’s largest cities are Asian-America.

During a speech Wu made after the Atlanta spa shootings, in which six of the victims were Asian women, she spoke how she  values and encourages advocacy and participation from the Asian-American community.

Today, we get to work! pic.twitter.com/NyUzxvoNsJ

“Now’s the moment for us to speak out,” Wu said. “It’s time to break the cycle of invisibility.”

She was not the only Asian-American running for office on Tuesday that made history. In Cincinnati, Democratic candidate Aftab Pureval, became the first Asian-American mayor in the city’s history. He is of Indian-Tibetan descent.

Meanwhile, in New York City, Eric Adams became the city’s second Black mayor, defeating Republican nominee Curtis Sliwa. He was also joined in making history in New York City by Alvin Bragg, who will be the first Black DA in Manhattan after his own triumph.

Adams retired from the police force as a captain after 22 years and entered politics in 2006, winning a seat as a New York state senator. In 2013, he took office as Brooklyn borough president, becoming the first first Black person to hold the position.

Adams used his law enforcement background as a major talking point throughout his campaign, which comes after a year of protests against police brutality and racial injustice erupted around the world.

Breaking News: Eric Adams was elected as the second Black mayor in New York City's history, with hopes of guiding its recovery from the pandemic. https://t.co/ZQyUaNdlFZ pic.twitter.com/XT5QYRyDYG

“I became a police officer, I understand crime, and I also understand police abuse,” he told CBS Mornings after his primary win.

"And I know how we can turn around not only New York, but America. We're in a terrible place, and we can turn this country, this city, around,” Adams said.

In his victory speech Tuesday night, he spoke about the significance of his win after growing up facing adversity.

On his campaign website, he details how he and his five siblings were raised in Queens by a single mother who cleaned houses to support them. At many times he said that he wasn’t sure if his family would come home to find an eviction notice on the front door.

It's official -- our five-borough, knock-every-door, reach-every-voter campaign was successful: We have won the race for Mayor of New York City!

This is my dream come true, and I couldn’t be more proud to represent the City that we all love as your Mayor-elect

“For a young man from South Jamaica, Queens who grew up with all the challenges that every New Yorker faces, tonight is not just a victory over adversity, it is a vindication of faith. It is proof that people of this city will love you if you love them,” Adams said.

Adams said his campaign was for "the underserved, the marginalized, the abandoned" and emphasized to his constituents, "I am you."

Elsewhere, history was made in Pittsburgh by Ed Gainey, who was elected as the city’s first Black Mayor. Previously, Gainey was a member of the PA House of Representatives from District 24, and he defeated incumbent Mayor Bill Peduto in the city’s Democratic primaries in May.