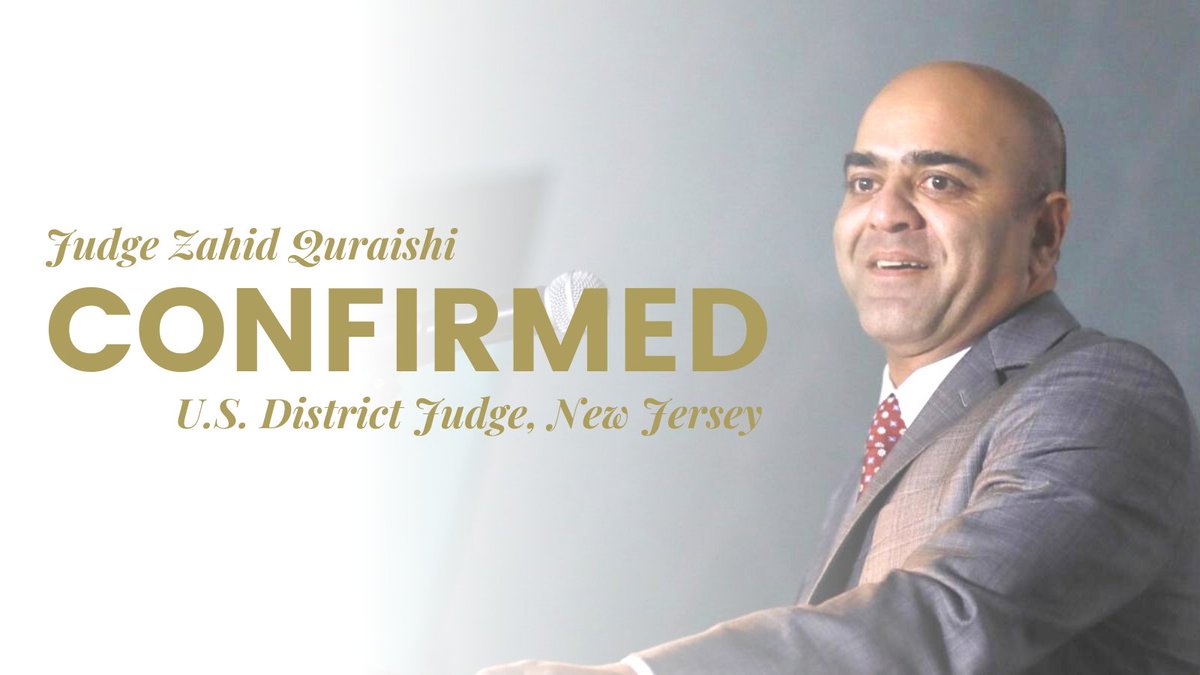 The U.S. has its first Muslim-American federal judge in Zahid Quraishi

Quraishi made history on June 10 after an 81-16 Senate confirmation vote.

Zahid Quraishi, the 46-year-old son of Pakistani immigrants, made history last week as he became the first Muslim-American federal judge in U.S. History.

This historic day is long overdue.

The diversity of thought and background of those serving in public office is one of America’s greatest strengths.

On Thursday, June 10, the Senate confirmed Quraishi as a federal judge for the District of New Jersey by a vote of 81-16.

On the floor, New Jersey Senator Cory Booker applauded the confirmation, recognizing both the qualifications and character of Quarishi.

“He is well qualified because of his character, who he is as a person, and his commitment to service. But he is well qualified on a higher standard than that. He is a patriot to this country. Patriotism is love of country and his actions have shown his love for America,” he said.

Quraishi’s father, Nisar, emigrated from Pakistan to New York in 1970. He then opened a medical practice in Tribeca, and continued seeing patients until he died of coronavirus complications in April 2020.

“We believe he passed away giving his life to what he really loved,” his son added. “He loved practicing medicine. He loved helping other people, which caused him to be infected and pass away,” Quarishi told The Tribeca Tribune.

The newly confirmed federal judge received his graduate degree from Rutgers Law School and began an active law practice, but left it behind to enlist in the Army following the 9/11 attacks.

While in the armed forces, Quraishi served two tours in Iraq supporting Operation Iraqi Freedom in 2004 and 2006.

In 2019, he was appointed as a U.S. magistrate judge for the District of New Jersey, making him the first Asian-American to serve on the federal bench in the state.

Quraishi was among the first judicial nominations announced by President Biden in March.

As promised, it was a diverse slate that included three African-American women tapped for Circuit Court vacancies, the first AAPI woman to serve on the U.S. District Court in D.C, and the first woman of color to serve as a federal judge in Maryland.

"We must expand not only demographic diversity, but professional diversity, and I know that President Biden agrees with me on this, and this will be something that I will set out to do," said Senate Majority Leader Chuck Schumer, noting that Judge Quarishi is a “powerful” example of this.

Congratulations to Zahid Quraishi on this historic senate confirmation as the U.S. District Court Judge for the District of NJ

When Biden announced his intention to nominate Quarishi, the White House noted his many accomplishments.

From 2008 to 2013, he served as an Assistant U.S Attorney for the District of New Jersey and prior to this role, he was an assistant chief counsel at the U.S. Department of Homeland Security.

Quraishi also served as a military prosecutor, achieving the rank of Captain in the U.S Army Judge Advocate General’s Corps.

Dr. Ijaz Ahmad, chairman of the American Pakistani Public Affairs Committee, said in a statement that Quraishi is a “model for the outstanding contributions that Pakistani and Muslim Americans make to this country every day.”

“We are grateful to President Biden for nominating him, and to members of the Senate for confirming him today," said Dr. Ahmad.

“He is a model for the outstanding contributions that Pakistani and Muslim Americans make to this country every day. We are grateful to President Biden for nominating him, and to members of the Senate for confirming him today.” @ijazgoshi via @NPR https://t.co/g0skyEHcmh

The Muslim Public Affairs Council also applauded this historic moment as Judge Quraishi steps into his role as the first Muslim-American to serve as an Article III federal judge.

In a statement, it expressed gratitude to the Biden administration for following through on its pledge to make the federal government “more representative of the rich diversity of America.”

“In the past few months, we have seen an American Muslim woman, Deputy Director of the National Economic Council Sameera Fazili, speak from the White House dais on economic policy,” the council said.

Today serves as a testament of the inclusive America envisioned by our founding fathers. Congratulations to Judge Zahid Quraishi, the first Muslim federal judge in American history.

“Judge Zahid Quraishi’s confirmation is a hallmark in this new era of progress for American Muslims, breaking barriers by filling roles that have not been historically filled by Muslims,” the statement read.