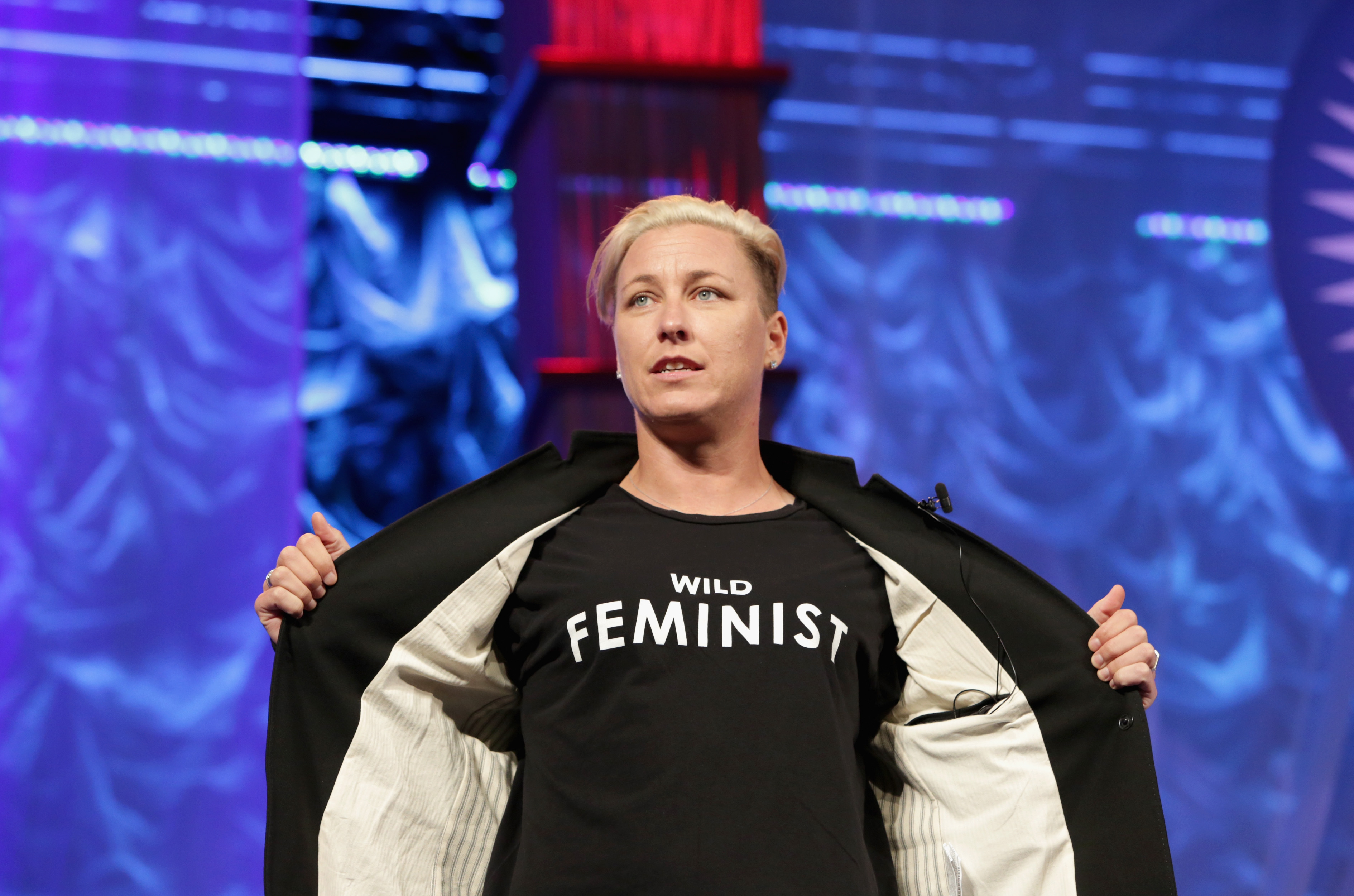 A women’s conference for empowerment, networking, and laughs: What they learned

“If you’re called bitchy, that must mean that you’re doing something right!” victoriously declares two-time Olympian gold medalist and FIFA Women’s World Cup Champion Abby Wambach, to a gleaming crowd of over nine thousand women- a few men -of all ages and backgrounds avidly nodding their heads in agreement and chuckling at the relatability of the statement. Of the nine thousand, there were industry veterans and career coaches, distinguishable speakers such as Anita Hill and Julie Holland, hundreds of middle school and high school students through the Young Women’s Program, and representatives from a multitude of female-owned businesses and charities.

And, rest assured, they have been called “bitchy” at some point during their lives as go-getting women, ambitious in their fields of psychology, consulting, book-writing, athleticism, comedy, start-ups, design, academics, or motherhood.

Wambach, later in the luncheon keynote, strongly urged those in the audience (inclusive of all genders), to lean into discomfort, and to respect and acknowledge differing opinions in order to personally grow and in order to become exposed to ideas and people that one otherwise would not have been exposed to due to being “overly sensitive” or “in the same circle of like-minded people.” Furthermore, she encouraged millennials to continue expecting and demanding more and whining about challenges, because despite the backlash the media has given this generation, Wambach thinks that “the whole damn point” of women’s movements from back-then and all that women have achieved beforehand is to promote within the women of now to question, to assert themselves, and to push for what they believe in. Wambach has been an active and potent proponent of wage equality, both on and off the field, and insisted that those in the audience fight for their passions and their creative projects, and cease the opportunity “to be treated as an equal in the room, at the table, and on the paycheck.”

She was especially ardent about Title IX, and how, while it has drastically affected her life in a positive way and has opened the doors to soccer stardom and providing support for the LGBTQ community through her celebrity, she also knows that the law still needs to be modified and remedied, and she expects “Title Nine point Two” to be created by those very same millennials that are constantly bashed on.

Wambach was at the Conference not only to give a keynote, but to also do an intimate press Q&A earlier in the morning, and a book-signing to promote her memoir Forward, about the struggles and lessons of moving past a prodigious athletic career as a recent retiree.

The second speaker of the luncheon that afternoon was the hilariously honest and effervescent Mindy Kaling, a brown Asian American woman that has constantly proven that women- no matter what they look like or who they are -can succeed in the male-dominated and cutthroat world of Hollywood, particularly comedy and screenwriting. Kaling did not keep mum about her challenges, however, and described them to her interviewer (distinguished Lesley Jane Seymour), about being a pioneer and a trailblazer as a director, producer, actress, author, writer, and comedienne.

She admitted to enjoying working with women over men, stating: “Maybe this is a little sexist… But I love working with women, and I prefer it because we roll our eyes at the same thing, we’ve been on the same battleground and dealt with the same crap. And, the relationships I have had with women have been the most sustaining in my life.” Kaling brought the example of how, while she prefers working with women, it does also bring a certain amount of setbacks. During the production of Ocean’s 8, for example, she joked that she could never pull pranks on any of her female co-stars like the male stars of the original Oceans trilogy had done:

“If I wanted to pull a prank on Rihanna, her bodyguard would just taze me! You can’t pull pranks on women! It’s kind of a sad reality, but there’s a high level of worry about safety for female celebrities… You can’t mess around like that. Not because you don’t want to, cause pranks are so fun!, but because of threats that we’re worried about every single day.”

Kaling also spoke candidly about how it felt to have her show, “The Mindy Project,” canceled on FOX and transition over to Hulu, her immediate need to express solidarity for women that get bullied for who they are and what they look like (such as “Leslie Jones, Simone Biles, and Serena Williams), and how women and their daughters should worry more about being called unintelligent than being called “fat.”

While all of the keynote speakers, and the slew of renowned women who led breakout discussions and panels were phenomenal and genuine, one begs the question: What does the “regular” woman, the one who is not a New York Times bestselling author or media mogul, make of all of the empowering witticisms?

This led me to speak to Sophia Vargas, accompanied by her friend Silvia Cavalieri (two juniors from John W. Hallahan Catholic Girls High School), about what she had taken from the event as a sixteen year old young Latina:

“There’s no doubt that this is a male-dominated world, but the Conference has made me realize that we women can and will rise above that. I needed that, because I deal with the negative outcomes of the patriarchy a lot. I have to walk over to our neighboring all-boys school pretty often, and you should hear the comments they make towards me just because I’m a girl walking around their halls… It’s disgusting. But all of the talks today have made me say, you know what, screw them! I deserve to be respected.”

Vargas and Cavalieri both effusively displayed their gratitude particularly towards Annie E. Clark, a survivor of campus sexual assault that has written a book, founded the group “End Rape on Campus” with Andrea L. Pino, and directed a documentary based on her experiences. The Hallahan juniors remarked, “It’s just so amazing, just the fact that so many people have gone through this horrible thing… But that this woman has been brave enough to be public and to empower others, and to let them know that they’re not alone.”

Vargas continued speaking about how, being a woman of color and being a Latina has impacted her in other ways, but how certain speakers of the Conference have given her an overwhelming amount of faith in the prospects of her future:

“You know how Latino guys are… They’re so obsessed with masculinity, machismo, soy macho, and it’s been hard growing up and having friends that have that mentality… Like, my guy friends always say, ‘I’m going to be the professional soccer player, I’m going to be the professional anything. You’re not gonna get there, so stop trying so hard.’ That always used to get to me… But then, I got to hear Anita Hill and Mindy Kaling speak, both women of color who have done such incredible things, and they represented that I can amount to more than the stereotypes that everybody wants to throw upon us.”

Raquel Arredondo, a first generation Cuban-American from South Jersey, a speaker at the event, and the assistant director for Drexel University’s LeBow College of Business career services office, echoed many of Vargas’ sentiments of feeling inspired by the women- both attendees and addresses -of the Pennsylvania Conference for Women. In fact, during her first year at the event, she was so inspired during one particularly enriching panel discussion that she got the idea to begin her own career management and coaching consulting group.

Arredondo explained to me how the narrative of being a first-generation immigrant has given her a great deal of responsibility, knowing the conditions that her family came from and lived in, and the struggles of adapting to a new culture. Her parents worked hard to give her and her siblings something wonderful, and she has transformed the full-advantage of this gift into the ambitious, straightforward, and “development maven” aspects of her personality. She stated that while being a female, a Cuban-American, and a Hispanic has given her pride and has comprised so much of who she is, she also is wary of the microaggressive ignorance it has attracted in the workforce. For example, at Arredondo’s first job in higher education- at a university- she was given a tour on campus, and once she explained her ethnic background, she was told: “Wow, I bet you grew up eating a lot of tacos!.”

“That is what was so great about seeing someone like Mindy Kaling up there on stage today,” mused Arredondo, “it was exciting to see her because it resonates with my experience of growing up in that ODD household with customs and values that are different from my friends’. I grew up in a community that did not have many Latinas, and I work in a field that does not have many Latinas, and that was all isolating and frustrating. Seeing someone like Mindy then, was uplifting, because in hindsight, your ethnicity and your race make you who you are, and you need to appreciate what that means and you need to have a better understanding of how those ‘odd’ things you get from being multicultural can make you stand out at work, and can empower you in your daily life.”