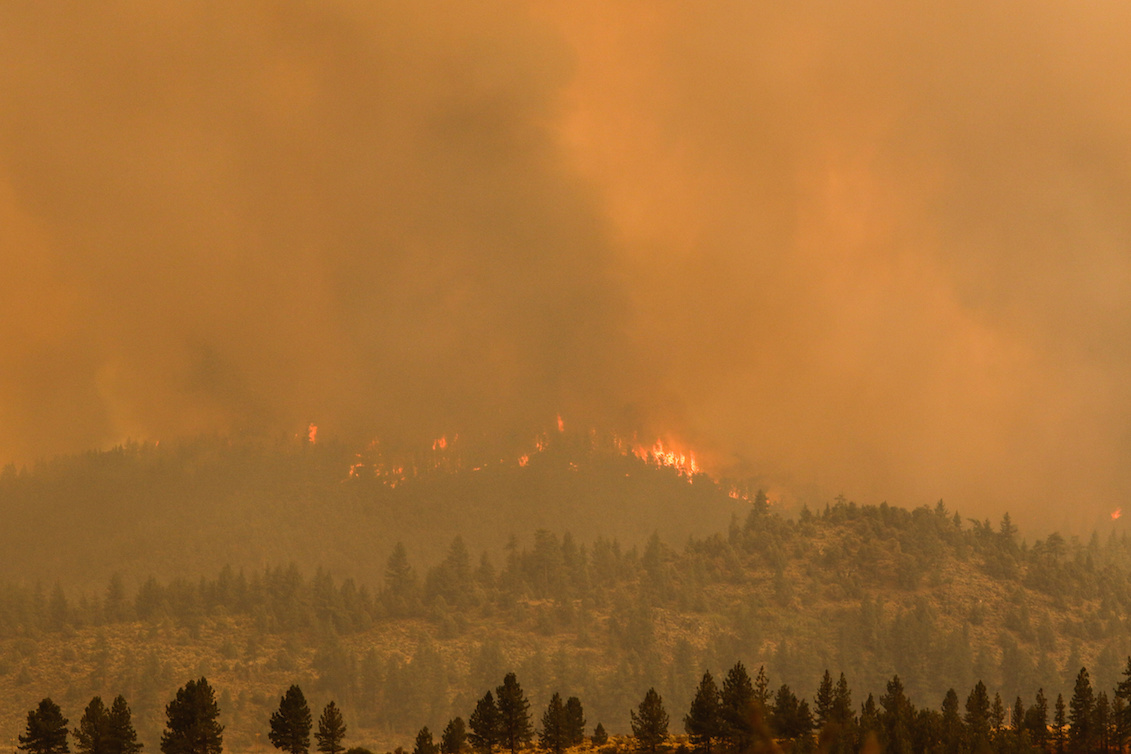 The Tamarack fire burns unchecked due to drought conditions and gusty winds. The Tamarack fire continues to burn through more than 21,000 acres and is currently 0% contained. Photo: Ty O'Neil/SOPA Images/LightRocket via Getty Images

Earlier this week, Philadelphia’s air quality was worse than Los Angeles, San Francisco and Portland — all cities closest to where the wildfires are raging.

Wildfire smoke coming in from the American West Coast and Canada has settled over the Eastern seaboard, worsening Philadelphia’s air quality. Residents of affected areas should take note of safety warnings to protect themselves, family members, and others.

Air quality warnings were first in code orange — unhealthy conditions for sensitive groups — but earlier this week, warnings advanced to code red, categorizing the air quality as unhealthy for all groups.

Since hitting code red, the city’s air quality has improved, but the persistent threat of burning wildfires leaves room for another step back in the process.

How to stay safe

While particularly vulnerable groups should take precautions where needed, all residents should note the smoke’s potential effects to more easily identify if you or someone you know is affected.

People who should specifically consider precaution are people with asthma, chronic obtrusive pulmonary disease, and lung and heart disease. Pregnant people, young children, the elderly, and people who identify as having a lower-socioeconomic status, should heed precautions, too, according to experts.

In more extreme scenarios, exposure to wildfire smoke can cause the hospitalization or death of vulnerable people. Public health officials believe long-term effects of smoke exposure could include decreased lung function, a weakened immune system, and a higher risk of flu infection.

Health officials say it is important to watch out for air quality warnings, and to avoid the outdoors if advised. Closing doors and windows, and running air filters can manage the quality of indoor air.

Face masks are also being recommended as protective devices.

Note also that air quality is subject to change, and many variables should be taken into account such as local weather and the state of the wildfires.

Resources for monitoring air quality in Philadelphia, as well as globally, are available.

Where the smoke is coming from

Other places outside of the West Coast regions have also seen weakened air quality. Smoke from wildfires has reached New York City, New Jersey, and Washington D.C., in addition to Pennsylvania.

Sheryl Magzamen, a professor of epidemiology at Colorado State University, said that wildfire smoke and its effects will likely be a mainstay of Summer seasons going forward. The intensity of fires and current air direction often determine the travel routes of wildfire smoke.

Wildfire smoke can worsen in quality depending on the distance it travels. The denser the smoke, the more capable it is of traveling a far distance.

This is why Philadelphia has been so affected. The city is a particularly far distance away from the wildfires, but since it is a down-wind community, a dense smoke has naturally settled.

The smoke’s ability to settle in Philly makes the city an alarming target, as many residents may not foresee the effects of wildfires so far away.

Earlier this week, the air quality in Philadelphia was worse than it was in Los Angeles, San Francisco, and Portland: all states where the wildfires originated.

Magzamen suggested the disparity in air quality can result from different levels of precaution taken, as states where wildfires are originating are taking the strongest precautions.

This change in air quality is said to be an example of the extreme, climate-induced weather conditions recently observed around the globe. Flooding recently took hold in China, Germany, New York City, and London, while heat waves occurred in Siberia, Scandinavia, and the American Pacific Northwest.

Wildfires are spreading more prominently due to decades of firefighting that has left high levels of accumulated dead trees and other fuels on forest terrain. With climate change’s effects drying the landscape, wildfires are becoming dangerously frequent.

Effects from this incoming wildfire smoke will likely continue throughout the weekend, but wildfires are not slowing down this Summer.

University of Washington wildfire smoke expert Dan Jaffe predicts “in terms of air quality, everywhere in the country is going to be worse than average this year.”

Air quality can be measured via the air quality index, or AQI.

AQI measures pollution. Calculations are based on the amount of pollutant concentrations measured in increments of an hour, eight hours, or a full day.

AccuWeather meteorologist Max Gawryla stated that an AQI of 0-50 is normal for Pennsylvania.

Taking precautions will assist Philadelphians as fires are fought and extinguished on the West Coast.

An online smoke map of the United States — created by the EPA and the U.S. Forest Service — is available and can be utilized alongside Philadelphia’s air quality tracker.