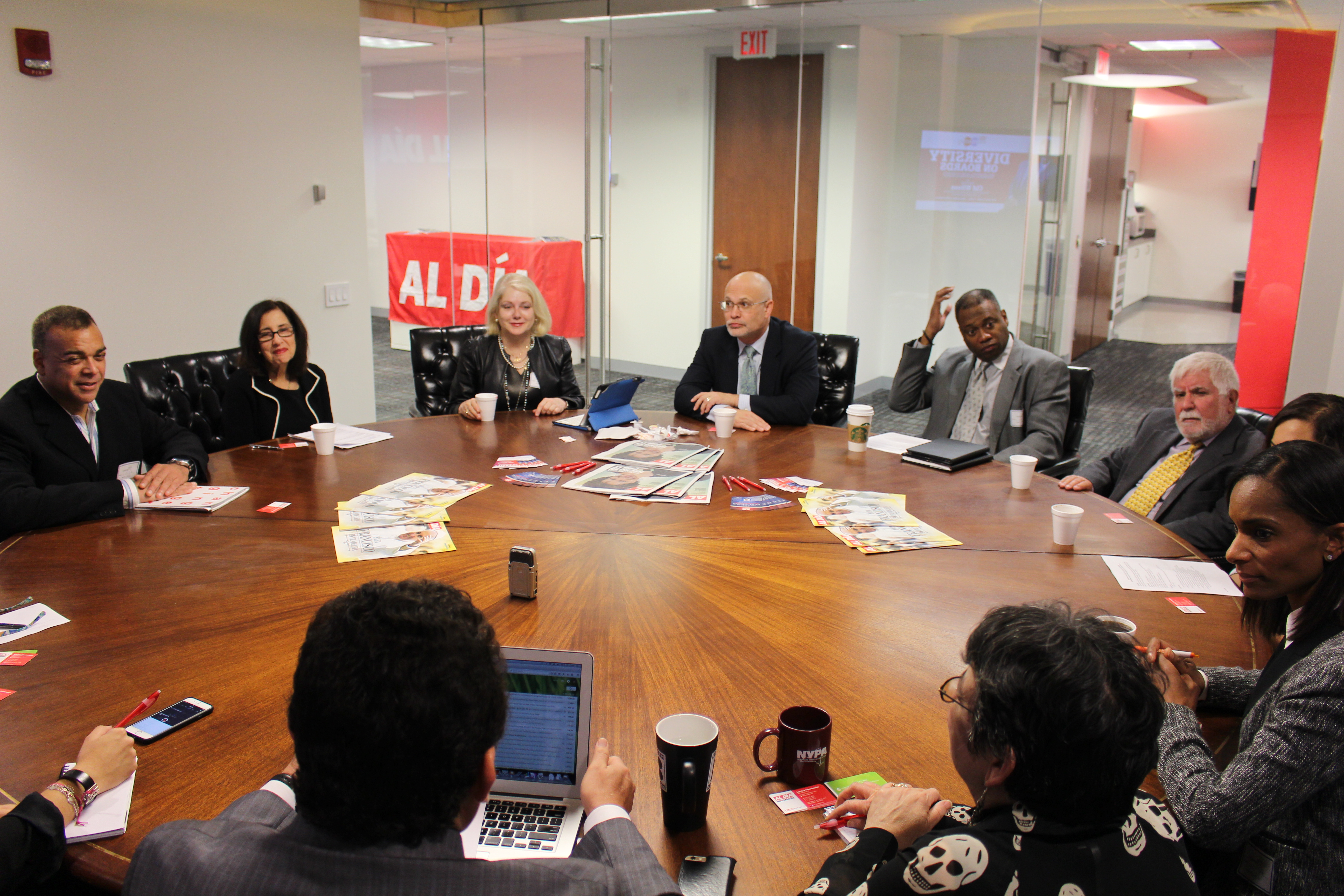 Taking oral health to the next level

“There is a time in a country that the entire system of health care gets redefined and we have the opportunity in America to have that moment in history, to redefine the health care system and one that begins to put value and the patient in the center.”

The person who said the aforementioned is Ivan Lugo, regional manager for North America and Puerto Rico for Scientific Relations at Procter & Gamble.

Lugo was one of the nine experts who gathered around AL DÍA’s executive CEO round table to share his vision of the current state of the oral health system in America and to address the necessary redefinition of the model from different points of view.
For that reason, the conversation brought together stakeholders from the dentistry field, but also experts in education, public services and innovation.

Educating the population on the importance of having a good oral health to prevent most common diseases — such as cavities or gum disease — is one of the main goals of the dental community. All of the participants of the roundtable agreed: The key is to start with children.

Darlene Kamine spoke about a model implemented in Cincinnati, which solved the lack of accessibility to care by installing dental clinics inside the schools. “The school is the building (but) it’s not just not for children of the school. The approach we’ve taken statewide in Ohio is  … (that) there is not a single community across the United States that doesn’t have a school. If it’s a rural area or an urban area, there is a school. And that school building is a publicly funded facility and is usually used very few hours of the day ... So the idea is not looking at it as a school, but looking at it as a hub; looking at it as the center of whatever the community is.”

The City of Philadelphia has a huge interest in this model, in fact. Last November, Jim Kenney and the president of the City Council, David Clarke, traveled to Ohio to see firsthand how the system works.

“We really look at the school as the catalyst for the revitalization of the community, of the security and stability of the family of the well-being of the child and all it all has to work together,” Kamine said.
For Beth Truett, it’s a matter of finding which solution better suits each community.“We have a program called Smiles Across America and the goal is to connect communities with resources and this ties into the overall philosophy that each community knows best. There are some common problems related to poverty, related to sources of injustice like (lack of) transportation, languages differences, low literacy... Those issues look the same for communities, but each community has different solutions and our goal in our nationwide partnership is to have a mixture of urban and rural, and smaller towns. And to both facilitate the work in these communities through funds, technical assistance and community awareness building, but also for us to learn (from them).”

David David Castro, CEO of I-LEAD is worried about lack of oral health education in schools.

“I have four children, they are all in the education system, not a single one of them was exposed to oral health information during their normal education,” Castro said. “That’s a huge missed opportunity. I mean if you can have an educational system that teaches kids sex education, which it does; that teaches them basic things about nutrition, which it does; how could it also not include oral health in that messaging? I would say that that information gap is a huge lever in the system because when a mother knows that something is important to the health of her child that’s a huge motivation factor. It’s a game changer in terms of their willingness and interest in terms of finding systems.”

According to Castro, one of the strategies to follow could be to use the natural interest of kids in being attractive, and to link beauty with being healthy.

“Kids are naturally interested in being attractive, they are naturally interested in appearing to be healthy. One of the things that is happening in our culture is that health is considered to be beautiful. So that’s a powerful motivator, if you can connect the idea of oral health with grooming, with being attractive. It’s a powerful motivator to make people understand that this is an easy thing to do,” Castro added.

Tara Harper shifted the focus a bit. “When we talk about low income communities, when we talk about Latino communities, when we talk about impoverished African American communities… if what they see at home and the person sitting next to them has the same issues, they are not going to care because they don’t understand that they need to care about that,” she said. “So, using that tactic within that community I don’t think necessarily will have the same impact. Part of we are trying to do as an organization is look at the community at hand and make sure that the messaging matches the community. We have a health education, and regardless what school or what your community background is,making sure that oral health is a part of that is critical.”

In Harper’s opinion, families should also be involved in the process.

“It’s not just about the kids, because again as we know, they are going to home and whatever they see at home is what is going to prevail,” she said. “So it’s critical to have it in the school but also to bring that family into the school.”

Nipa Thakkar: “I think that concepts like guilt and shame, and just even the whole illusion of self esteem are learned behaviors. All of the these things are not from childhood. You are not afraid of, or ashamed of, or feel guilty for anything unless somebody tells you that you are supposed to feel that way. So, if from childhood, like from a school setting, we are able to teach the good behaviors, the rights behaviors to elevate people’s dental IQ right from the beginning, I think you really are able to prevent some of these issues.”

Minority students are 12 percent of the dental students, according to American Dental Association (ADA) data from 2011, despite the fact that minorities represent around 25 percent of the American population.

“There is a lot of the families with oral health professionals and it’s because somebody in their family is already in the profession,” Castro said. “So, they get that role model somewhere in their network. A lot of the effect of bringing (families, students) into the schools is to expose people exactly to that idea.”

“Admissions offices and dental institutions really need to change how they look at the record of an individual from a particular community so it’s not necessary dependent on standardized exams but a whole portfolio review,” Lugo said, “and what they can contribute from their knowledge base to be able to impact a community that they are all familiar with. They understand how to give passion and empathetic care to that particular community,” Lugo added.

“What doesn’t exist at this point in America is a system of education that’s disruptive enough to be able to train capable individuals in communities that are their own and that are aware of their own sensitivities to be able to bringing it that knowledge and that talent in that community and keep it there. I think one of the challenges that we have to face now is: how do we create that system?” Lugo said.

However, Lugo stressed, the desire of working with minority communities needs to come from the student.  “We began to train individuals and there was a mindset that we were recruiting underrepresented minorities to deal with underrepresented communities,” he said. “And I was so opposed to that because we should bring people and recruit them for their talent and then it’s a choice if I want to work in that community. But we should not be in an academic institution recruiting, hoping that the minority students will take on the burden to take care of these patients.”

Another issue the oral health community is facing is the belief that oral health and systemic health are not connected, which according to all the experts is a huge problem.

Margaret Scarlett: “The problem that we have is that we know that there is a bidirectional relationship between oral health and systemic health. This is an important thing. [...] When we included oral studies in some of our long term epidemiologic studies we saw some remarkable things. [...] I’ve been looking at this sort of issue for 20 years, but in most of long-term studies oral care is left out and health professionals have sort of forgotten about the mouth.”

Even when it is a head and neck exam, she said. “Most health professionals, what they will check is the head, the eyes, the ears, the nose and the throat but not the oral cavity. We have a fragmented system and empowering individuals and letting them know ‘hey, at the community level you can stop early oral disease’ has not been a message that has been out there and that’s really, really important.”

Tara Harper: “We continue, as people, to think that teeth are one thing, body is another. […] Consumers believe that your teeth’s health has no impact on your body. As the oral health network we understand that there is a connection, but until the population understands that there is one, there is not going to be an overall shift in perception.”

As the conclusion of the roundtable, Lugo pointed out oral health network’s ultimate mission.  “I think creating a system that it’s for social good, that creates trust, respect and is organically driven could be something that may take this to another level and put dentistry in the map where it belongs to be,” he said.