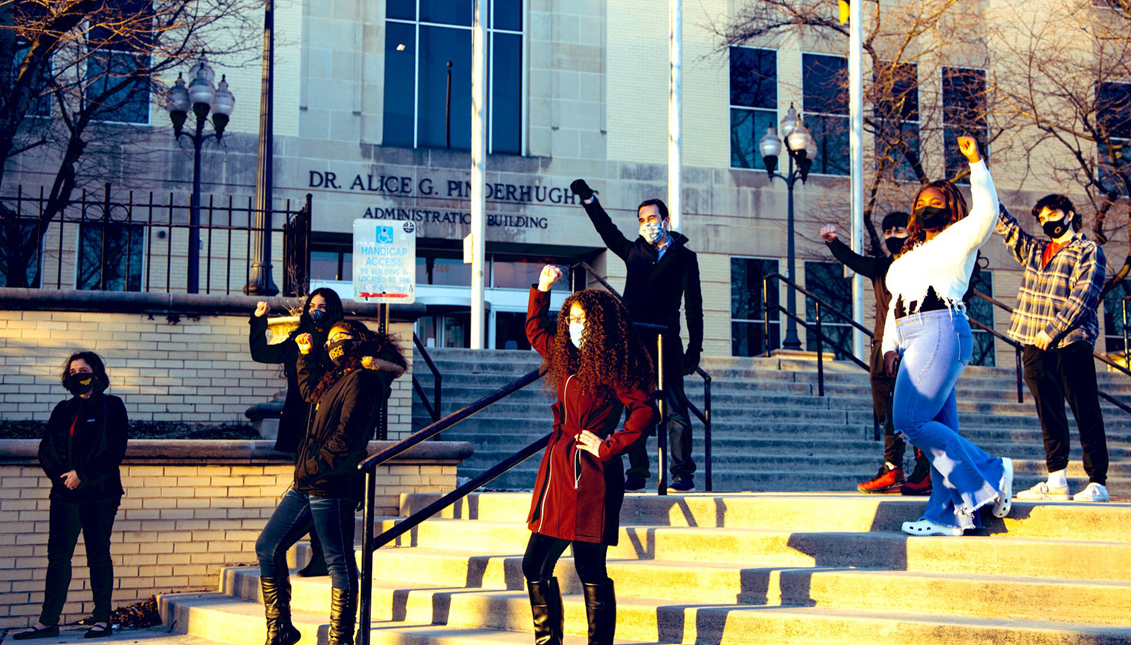 SOMOS was started in May 2014. Photo: @Zeke_Cohen-Twitter.

Many Latino children who were born in the U.S. or migrated here with their parents have been ridiculed for not fitting in.

In today's world, many Latino students feel the need to fit in, especially during their first year of high school.

But for Latinx students at Baltimore City College High School, there is an initiative to create their own advocacy group to maintain a close relationship with culture and accentuate others in the process.

It gives them the opportunity to learn more about different Latino customs, feel included, and provides a safe space that belongs to them, and they can develop close bonds with one another.

The advocacy group, Students Organizing a Multicultural Open Society, (SOMOS), was co-founded in May 2014, by Yaslin Machuca Molina, a high school sophomore, who only knew five other Latino students at the time.

Her focus was to create an atmosphere where students can reminisce about their experiences being Latino, and also learn more about Latin American culture for students who aren't Latinx, but still want to learn.

The club convened for piñata nights, movie nights, and discussions about critical topics, from the problems on the border to racial disparities, and raids carried out by Immigration and Customs Enforcement (ICE).

For most SOMOS students, they are first-generation American citizens, which means that a lot of them have more responsibilities than the average American teenager. Some have to hold down part-time jobs, take care of younger siblings, and help around the house, while managing their own homework assignments.

“They are translators, they’re going to the doctor, they’re helping to figure out tax payments,” Franca Muller Paz recently told The Baltimore Sun.

What was a ‘once-a-week meet-up’ has evolved into inclusive gatherings that happen multiple times a week, even on the weekends.

Ever since 2016, when the Trump administration took office, it’s been a catalyst for Latinx students to come together and discuss the importance of the Latino culture in America and figure out ways to fight social injustice for Latino students nationwide.

“A lot of the times we are ignored, and so raising up our voice really means a lot. SOMOS is a connection to my community, as an activist,” Kimberly Vasquez, a student organizer told The Baltimore Sun.

Right now, that fight is to support Latino families fearing deportation while trying to survive the ongoing COVID-19 pandemic.

Since many schools in the country have been shut down, students had to transfer from in-person lessons, to fully virtual classes. This circumstance created a dilemma for children who aren't comfortable speaking English just yet.

In February, SOMOS created a petition to Comcast, to give low-income students in the city of Baltimore high-speed internet access so they could complete their assignments without connection issues.

For some students and their families, internet access is not an issue. But for others, it is nearly impossible to spend money on WiFi, laptops, and other high-tech devices while raising children.

Around 40.7% of Baltimore households do not have access to reliable internet and WiFi. Most families who don't have access are Black and Brown.

In April 2020, Vasquez gave public testimony along with fellow SOMOS member, Yashira Valenzuela-Morillo, and helped achieve a $3 million grant for the Baltimore Children and Youth Fund for essential technology supplies for students.

It is one of the many goals students at SOMOS have achieved, and they have no plans on stopping any time soon.

As COVID-19 vaccination rates continue to rise, many leaders believe now is the time to reopen schools, but student leaders at SOMOS don't want to rush the process of reopening.

Students will soon be meeting with City Council members to discuss the importance of a safe reopening.

“I used to be very shy,” said Vasquez. “Now, if I see something wrong, I will talk back, and I don’t care. I’ll make my opinion known.”