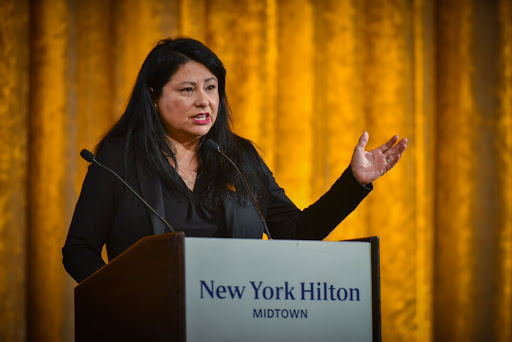 Elia Diaz-Yaeger, president of the Hispanic National Bar Association (HNBA), welcomed president Biden’s “reset of tone” regarding the U.S. Latino community through his executive orders on the Census count, protections for DACA beneficiaries, and pause on payments for federal student loans.

“Those are all real concerns that so many Hispanic families face.” - Elia Diaz Yaeger

For one, Diaz-Yaeger said that having excluded undocumented immigrants on the U.S. Census would have had dramatic consequences for a decade.

“States with higher populations of undocumented immigrants would have had criticial federal funding cut for programs like Medicaid and the Children’s Health Insurance Program,” she said.

Particularly, California, Texas and Florida — three states with high Latino populations — would have seen their political power and voice in the federal government diluted.

“California would have lost two House seats instead of just one, and Texas and Florida would have gained one seat less than they otherwise would have had,” said Diaz Yaeger.

On the order to preserve and fortify the Deferred Action for Childhood Arrivals (DACA) and an eight-year pathway to citizenship for people without legal status, Diaz-Yaeger said that even though all the actions the Department of Homeland Security (DHS) will take are not yet known, “it is likely many of the hurdles propped up by the previous Administration will be addressed.”

The pause on payments for federal student loans is also a momentary relief for many Hispanic families.

According to a study by the Student Borrower Protection Center, the median Latino borrower “still owes more than 80% of the student loan balance 12 years after graduating, compared to the median white borrower who owes 65% at that same time.”

Referring to the 100-day moratorium on deportations, which was recently blocked by a Texas judge, Diaz-Yaeger brought attention to the fact that the agencies charged with immigration enforcement have not been closely supervised.

“[There have been' so many allegations about mistreatment and abuse. Our federal government needs to know what the de-facto policies were before it can implement any changes,” she said.

Looking forward, HBNA’s president said the association has had conversations with the new Administration about ensuring that the leadership of the federal government is representative of the diversity of the country.

“We will continue to press them to further diversify the federal judiciary and to work with Congress to pass legislation that will improve the lives of all Americans, including Hispanic families.” - Elia Diaz Yaeger.