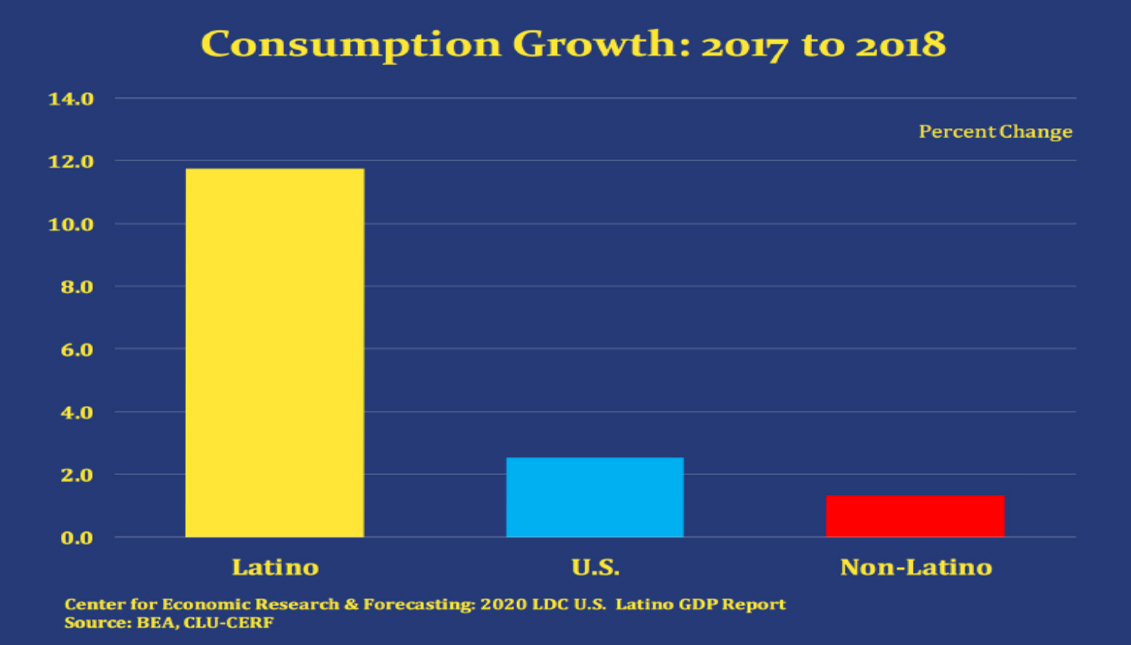 Latinos’ Economic Power, By The Numbers

A report released this week uses data to paint a powerful picture of the economic strength of U.S. Latinos.

As a group, U.S. Latinos had a gross domestic product, or GDP, of $2.6 trillion in 2018 – the eighth largest in the world if Latinos were an independent country.

That’s according to the 2020 LDC GDP report, the centerpiece of L’Attitude, a four-day national business conference featuring high profile business leaders such as John Donahoe, CEO and president of Nike, Tony Vinciquerra, Chairman and CEO of Sony Pictures, and Almar Latour, CEO of Dow Jones and Publisher of the Wall Street.

Soloman D. Trujillo, one of the founders of L’Attitude, said researchers  specifically chose to focus on the GDP because it is used worldwide to demonstrate a country’s economic health.

Led by the non-profit Latino Donor Collaborative, researchers from California Lutheran University and the UCLA Geffen School of Medicine prepared the 40-page GDP report that also focused on the rapid growth of the U.S. Latino cohort.

The contributions of Latinos are “a tremendous engine of economic growth within the United States.”

Latinos are spending more, earning better wages and salaries and more of them are obtaining college degrees

Latino households are large, multi-generational and growing steadily over the last decade. Most importantly, Latino population is young with a median age of 29 in 2018 vs 40.6 to non-Latinos. And this, according to the report, will be the key to revitalizing the U.S. economy.

“Latinos are adding substantial numbers of people to the critical category of working age adults.”

Even as Covid-19 has hit Latino households hard with many experiencing high unemployment rates and struggling to pay the bills, researchers of the GDP report pointed to the intangibles they believe will help the Latino cohort continue to be the key to restoring the U.S. economy.

“The hard work and persistence of U.S. Latinos is not only an engine of economic growth, it is an antidote to long term demographic challenges confronting the nation.”

The report continues saying “it is a bright spot during an extraordinary year of economic upheaval resulting from the global coronavirus pandemic.”