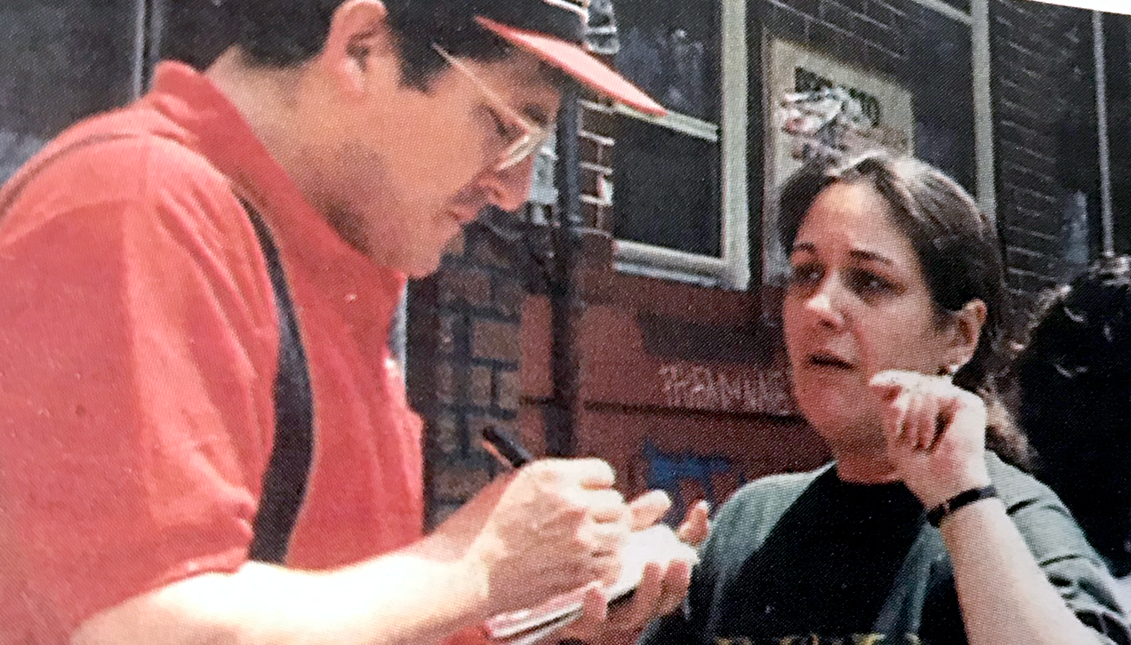 The Founder, Editor and Publisher of AL DIA in his early days interviewing a resident of North Philadelphia. Photo  AL DÍA News

Turned down 3 times for a Job in Journalism | OP-ED

I was rejected over and over while looking for a job, any job, in my early days in Philadelphia, but I remember vividly three instances in particular:

One at the Philadelphia Daily News, one at La Actualidad, the Spanish-language newspaper in the neighborhood where I lived in North Philly, and one more at the Miami Herald’s Spanish-language daily, El Nuevo Herald, in downtown Miami.

Three applications I enthusiastically submitted to potential employers of my talents when I was just 31 years of age, endorsed by ample academic credentials.

But I was literally the proverbial “round peg that couldn’t fit the square hole.”

“You are good for the Philadelphia Daily News,” declared the owner of the Spanish-language newspaper in North Philadelphia, Mr. Candelario Lamboy.

Mr. Lamboy, a practical businessman of Puerto Rican descent, asked me if I could, instead of writing, start selling ads for his publication, which in his pragmatic opinion were more urgently needed for the fledgling publication than the superfluous activity of furnishing a good story, or creating a better design, for the black and white pages of his very modest Spanish-language newspaper.

Perhaps I could write stories and do better layouts so that somebody else could sell some ads for the better-looking pages? I dared to pitch to Mr. Lamboy.

“You are good for the Daily News”, Mr. Candelario Lamboy said, matter-of-fact·ly...

His answer came back fast, matter-of-factly. “No, son. You are good for the Daily News,” he said while heading for the door and finishing the brief meeting with me.

Well, the Philadelphia Daily News was not impressed by my credentials, either.

I was interviewed there weeks earlier by the then editor of the opinion pages, a bearded man that never gave me his business card, but I came to meet n his office thanks to a referral of my good friend Alba Martinez, then a columnist in the "peoples' paper"

No experience at a newsroom in the U.S.?

It was like a medical doctor that graduated in the Dominican Republic, for example, trying to get his license to practice in an American hospital.

The Daily News editor who I only remember by his face asked me point-blank for "YOUR clips", teaching me in the process the word "clips" I didn't know. I told him I had as many Spanish-language clips as he wanted to see, but samples of my English-language writing were those from my times as a graduate student typing pretty boring papers at the University of Iowa.

"Round peg that couldn’t fit the square hole.”

The treatment was no different when I interviewed for an entire day with the Miami Herald, in Miami.

The treatment was no different when I interviewed for an entire day with the Miami Herald, in Miami, with a mostly Cuban American staff at the time running El Nuevo Herald, a Spanish-language daily growing rapidly and in need of more writers and editors.

I had found the job announcement in Editor & Publisher Magazine and I jumped with enthusiasm when I found the employment ad, I remember, in a Philadelphia Free Library branch.

With the Spanish-speaking staff of the Miami Herald, I thought, I would have it easy because my command of Spanish, written and verbal, was as good, or better, than theirs.

That would make me an automatic hire, I thought, when I received the invitation to fly to Miami and interview for the job as assistant editor, with a final encounter with the legendary D.H. Lawrence.

Not necessarily, as I’d found out.

I wasn’t prepared at all for the unexpected questions, but this one floored me at the start of my long day of interviews in Miami 30 years ago, before meeting the famous Miami Herald Publisher, when the Herald was owned by the #KnightRidder newspaper chain.

Sounded to me as that perplexing "Eres Puertorriqueño?  question (Are your Puerto Rican?) I got years later in Philadelphia where I finally found out, once again, I was a minority into a minority.

As far as I was concerned, I was just an unemployed man.

I better figure soon how to respond to my Italian Landlord who would expect a $250 a month rent payment each 1st day of the month.

A lot for a man with not even a penny in his pocket in 1991 in Philadelphia.

Undeterred, I started AL DÍA as a home-based, one-man newspaper operation in my home in North Philadelphia.

The rest is history.