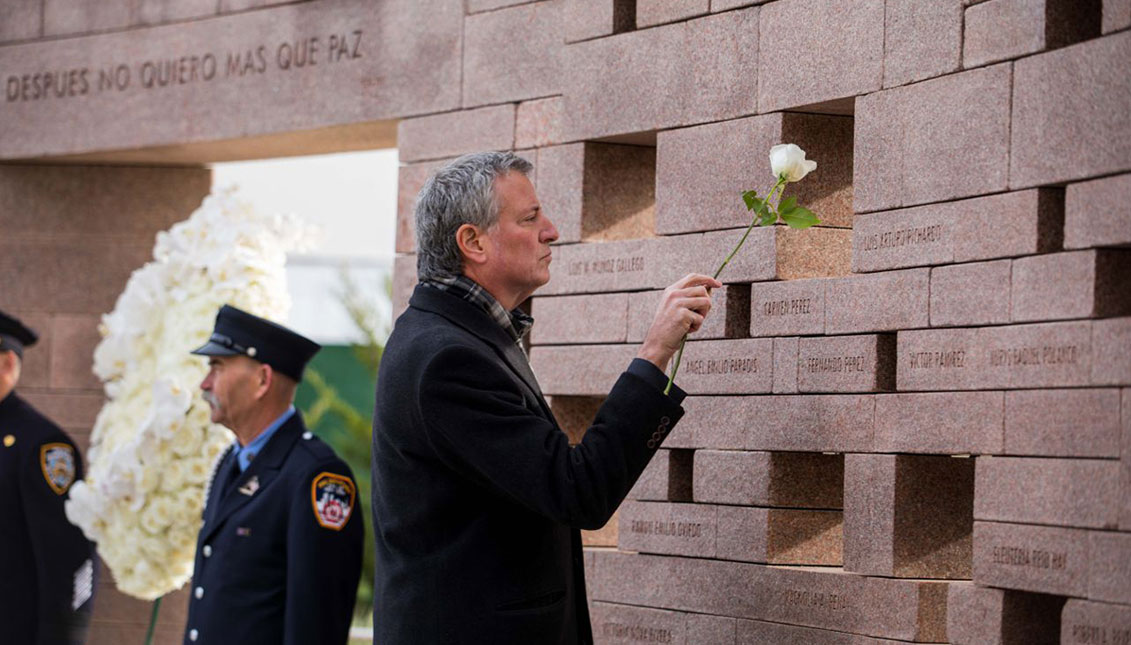 The families of the victims, mostly Dominicans, gathered to remember them.

Two months after the World Trade Center terrorist attacks, and overshadowed by the magnitude of 9/11, the United States’ second deadliest plane crash took…

Seventeen years have gone by since a Santo Domingo-bound American Airlines jet crashed in Belle Harbor, Queens, three minutes after leaving JFK Airport killing all 260 people on board and five on the ground. But the pain is still fresh in the hearts of Dominicans in New York and on the island.

Last Monday, as they have done each year, relatives of the mostly Dominican victims gathered to remember them at the site of the crash. Five Queens residents on the ground were also killed. Mayor Bill De Blasio was one of the speakers.

The crash of the Airbus A300 on Nov. 12, 2001 not only dealt a harsh blow to New York Dominicans, but also to their compatriots on the island. Because only two months and one day had passed since the Sept. 11 attacks on the World Trade Center, many Dominicans believed that Flight 587 had been brought down by sabotage, which made their pain even more unbearable. The National Transportation Safety Board later ruled out terrorism as the cause.

At the time, I traveled to the Dominican town of Baní to cover the tragedy’s impact on the island for the New York Daily News. No Dominican town sustained more losses than Baní. It was a sad and moving assignment — and the story became personal for me. This is what I wrote at the time:

“The mood in the sugarcane and coffee town, an hour’s drive southwest of Santo Domingo, is usually carefree and festive this time of year. The capital of the Peravia Province, sandwiched between two small mountain ranges in the north and the beautiful beaches of Las Salinas to the south, holds a 12-day feast for its patron saint in November.

“Dominicans from all over the isle and from New York come to lose themselves in tropical revelry and the warm embrace of family. But 43 of Baní’s sons and daughters were aboard Flight 587. The feast for St. Nuestra Señora de Regla was canceled.

“‘This town will never be the same,’ said Melcides Sánchez, 68, who lost two of his sons, José, 36, and Elvis, 34. The victims lived in Washington Heights and worked at an uncle’s bodega at Amsterdam Ave. and 134th St. Interviewed in his home, Sánchez spoke in low tones, with a somberness that seems pervasive in the 30,000-citizen town of narrow stone streets and brightly painted wooden homes. He said his sons, who left behind five young children between them, came back for the festival annually. This year, they planned to stay for an entire month. Sánchez was on his way to the airport to pick up his sons when he stopped at a neighbor’s home and heard the news over the radio. ‘I lost it,’ Sánchez said, his eyes moist and searching. ‘I didn’t know what I was doing or where I was.’”

At a time of the year in which the mood should have been one of celebration, the plane crash cast a somber pall of unspeakable grief over the beautiful town.

“Quien crea en el Señor, vivirá para siempre,” sang parishioners inside the packed Nuestra Señora de Regla, the church that bears the name of the town’s patron saint, during a service I attended during my visit. “Whoever believes in the Lord, will live forever.”