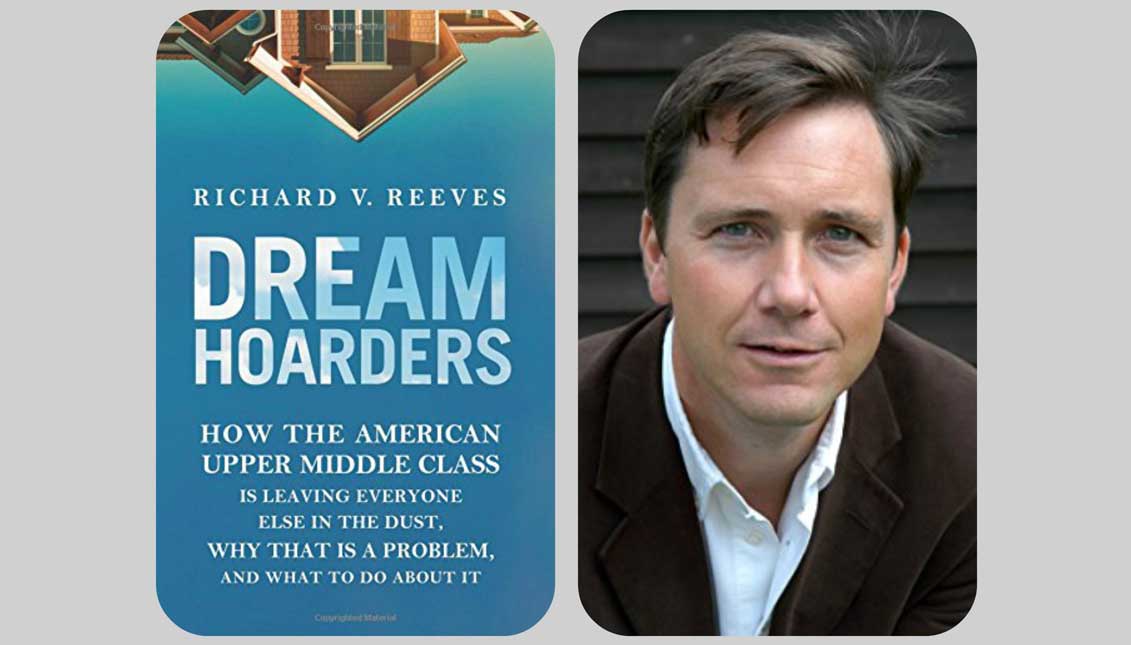 “Upper-middle-class parents have the means to spend two to three times more time with their preschool children than less affluent parents,” he wrote. He also excoriated “the structural ways the well-educated rig the system” -- mainly restrictive zoning…

To hear Richard Reeves tell it, the upper middle class is fast becoming the bane of American society. Its members have entrenched themselves just below the top…

That conclusion is dead wrong, but it contains just enough truth to seem plausible. We need to separate fact from fiction.

Reeves, a scholar at the Brookings Institution, makes his case in a new book titled “Dream Hoarders,” as in the American Dream. The hoarding refers to all the economic opportunities that the upper middle class is allegedly manipulating for itself. Zoning restrictions segregate the upper middle class into economically homogeneous neighborhoods, with the best schools. This provides an advantage in getting into selective colleges, leading to better internships and jobs.

All this is self-perpetuating, Reeves says. Class structure is becoming frozen. Downward mobility from the top is limited. Upper-middle-class parents are obsessed with supporting their children, from helping with homework to teaching bike-riding. The story seems so compelling that it could become conventional wisdom. Parents are destiny. Just recently, David Brooks, the influential New York Times columnist, bought into most of Reeves’ theory.

“Upper-middle-class parents have the means to spend two to three times more time with their preschool children than less affluent parents,” he wrote. He also excoriated “the structural ways the well-educated rig the system” -- mainly restrictive zoning and easier college admissions, including legacy preferences.

Why supporting social justice movements is important to Dr. Veronica Terriquez
July 26th, 2022
Latinos are building the American Dream for all
January 28th, 2021
A photographer makes art with objects confiscated from migrants at the U.S.-Mexico border
December 3rd, 2019

The trouble is that the facts don’t fit the theory. Reeves defines the upper middle class as households with pretax income from $117,000 to $355,000, representing the richest 20 percent of Americans excluding the top 1 percent (whose status he considers a separate problem). It’s doubtful whether families at the bottom end of this range feel rich. For example, a household with two teachers earning average salaries ($56,000 in 2013) would nearly make the cutoff. (Disclosure: Reeves acknowledges belonging to the upper middle class, as do I.)

By Reeves’ arithmetic, his upper middle class -- again, a fifth of the population minus the top 1 percent -- accounted for 39 percent of income gains from 1979 to 2013, only slightly lower than the 43 percent share of the bottom 80 percent. (The top 1 percent’s share was 18 percent.) This growing income gap is worrisome, because it implies dramatically different life experiences among Americans. The differences “can be seen in education, family structure, health and longevity,” writes Reeves.

But these undesirable trends aren’t caused by a rigid upper-middle-class oligarchy that’s hoarding opportunities for itself. Contrary to Reeves’ argument -- but included in his book -- is one study finding that among children born into the richest fifth, only 37 percent remained there as adults. Roughly two-thirds dropped out of the upper middle class. How much more downward mobility does Reeves want? He doesn’t say.

Similarly, some advantages claimed for the upper middle class are weaker than advertised. Access to the best schools? Sure, but that doesn’t cover all upper-middle-class students. Reeves reports that nearly two-fifths of the richest 20 percent of families live near schools ranked in the top fifth of their states by test scores. But that means that about three-fifths of these wealthier families don’t live near such schools. It’s also true, as Reeves notes, that the causation works in the other direction: Good students make good schools.

Though economic opportunities abound, the capacity to take advantage of them does not. That’s our real problem, not hoarding. Reeves reports that fewer than half the students at community colleges “make it through their first year.” Similarly, only six out of 10 children raised in top income families have bachelor’s degrees. If parents are so obsessed with -- and controlling of -- their children’s fates, why isn’t the share nine out of 10 or higher?

The irony is that Reeves has the story almost backward. As a society, we shouldn’t try to restrict the upper middle class, but to expand it. In general, it’s doing what we ought to want the rest of society to do. Its marriage rates are higher, its out-of-wedlock births are lower, its education levels are higher.

As for parents, why make them feel guilty for wanting to help their children? What are parents for, after all? To be sure, there are (and will be) excesses and examples of undeserved privilege -- brats. Life is messy. But let’s not blame the struggle of the lower middle class and poor on the success of the upper middle class. The two are only loosely connected, if at all.