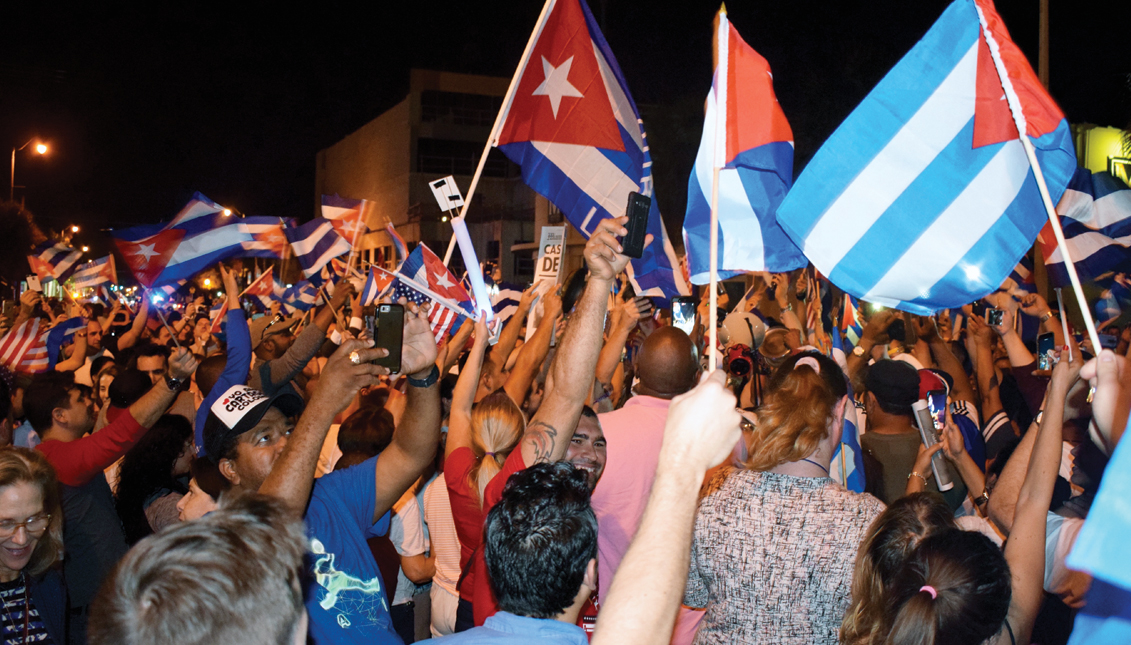 [OP-ED]: The voice of a Cuban-American Millennial

On the night of November 25th 2016, I walked out of Sunset Place in South Miami after watching a film with my childhood best friend, and had expected the day to be of importance to me simply because I felt like my breath had been taken away by the stunning visual effects and spirited Polynesian chants of Disney’s “Moana”, when suddenly, a buzz from my phone:
The New York Times Reports: Fidel Castro, Cuban Revolutionary Who Defied U.S., Dies At 90!

On the night of November 25th 2016, I walked out of Sunset Place in South Miami after watching a film with my childhood best friend, and had expected the day to be of importance to me simply because I felt like my breath had been taken away by the stunning visual effects and spirited Polynesian chants of Disney’s “Moana”, when suddenly, a buzz from my phone:
The New York Times Reports: Fidel Castro, Cuban Revolutionary Who Defied U.S., Dies At 90!
My childhood best friend raised her eyebrow dubiously: “But, doesn’t he die like, every three years? You can’t trust the news these days anymore. I don’t even know what to believe.” Still, we shed our cynicism for that brief moment of uncertainty, and looked at each other with hopeful eyes. Could it be, could it really be, that this moment has finally come?
It may seem macabre to think of two young 20-somethings chipperly walking out of a kid’s musical fairytale film and speaking gleefully about the possible death of a man, but Castro is no ordinary man, and because of his legacy, our generation is anything but ordinary.
Like most of my friends and cousins, I am a child of a Cuban refugee, and the granddaughter of a Cuban political exile. We are children and grandchildren of those who were told their existence was no longer valuable to a new system, a persecution romanticized and embellished with the guise of la revolución, one that charismatically promised, through the lengthy and distorted Marxist-Leninist(esque) ideologies of one bearded 39 year-old, a greater Cuba.
Two generations before our own fled the island, once claimed as the most beautiful Christopher Columbus had ever set his eyes on, in makeshift rafts, boat lifts, or Operación Pedro Pan, oftentimes with no belongings and with no relatives to call their own. Staying behind meant submitting to the revolutionary “ideals” that Castro posited his guerrilla movement on, as failure to do so could likely lead to imprisonment, a labor camp, or a disappearance.
Surviving meant coming to a territory with a foreign culture and tongue, and somehow starting anew in the 1950s and 1960s, which were rife with disdain and fear of minorities usurping Whiteness. Even in Miami, my grandma recalled that when she first arrived to a Goodwill shelter as a twenty-year old newlywed, a sign in the front clearly read: “No loitering, no pets, no Cubans.”
50 years later, in that same city, my grandma got to step out on Calle Ocho- the heart of the ethnic enclave of Little Havana -with her friends and her family to celebrate on November 25th and 26th, 2016 the death of a tyrant with cazuelas, banderas, and public serenades of Guantanamera. Flashes of Red, White, and Blue could be seen on every street from Coral Gables to Doral, and printed boldly upon the flags was a triumphant “CUBA LIBRE.”
In these historic forty-eight hours of Castro’s decay, I have felt a strange mixture of sourness and contempt for my generation, simultaneously infused with an effervescent and optimistic hope for the role of millennials (particularly Cuban-American and Cuban millennials), in moving forward, for we should not be distracted by the festivities and the Bacardí and the fireworks. Cuba is not libre, and the death of one man does not shatter decades of fearful indoctrination, ferocious loyalty, and even blind love, within a population of hundreds of thousands.

Cuba is not libre, and the death of one man does not shatter decades of fearful indoctrination

To those of you in my generation, those young outsiders devoid of any experience with my people’s oppression, who lambasted the cries of symbolic victory and joy at the death of Cuba’s notoriously egotistical and ruthless dictator, you are truly lucky. You do not understand the twisted and the painful it takes to endure in order to cheer at the image of an old-man’s decrepit carcass.
I do. Once you hear enough stories of parents torn apart, children orphaned, homosexuals slaughtered, homes demolished, journalists imprisoned, professionals and working-class adults stripped of their degrees, innocents tortured, and desperate seekers of liberty drowning or devoured a mere five miles from the coast of The Florida Keys, you cannot help but bid the abusive enabler farewell and good riddance in the face of death that was long overdue.
To those of you in my generation who consider yourselves educated, enlightened, and, somehow, enthusiastic about tyranny because it’s edgy to be against capitalism, against imperialism, and apparently, against basic human rights, the only thing you have to learn from Castro is what not to do when implementing radical or revolutionary change. I am not a Conservative, and I am not a Republican. This is not coming to you from an illiterate “redneck hick” that wrestles alligators in her spare time in the swampy marshlands of The Everglades, decked out in a Confederate Flag onesie. I have read multiple texts and taken courses with professors that champion Communism and Socialism, that harshly criticize American intervention in foreign politics, that ardently root for equality. I actively search for articles that challenge my ideals or preconceived notions in order to broaden my own perspective and capacity for compassion. But, when I see liberal millennials fawning over the tactlessness of Canada’s Prime Minister or solidarily mourning the loss of an oppressor alongside Black Lives Matter, I am aghast at the level of hypocrisy and ignorance of the pseudo-intelligentsia of the 21st Century.
Please speak to a Cuban or a Cuban-American about why they left, why their families left, and how they feel about Castroism. Speak to one that is eighty, and then one that is eight. Speak to an Afro-Cuban, and then speak to the blondest and most blue-eyed Cuban you can find (they exist). Speak to a refugee that went from practicing law, to stacking shelves and sweeping floors at Publix. Speak to an exile that transitioned from factory work to academia. Speak to a proud child or grandchild of someone who risked everything in order to ensure the presence of opportunity for generations to come.

"It is difficult to negate the seduction of a revolution that brought with it “free universal healthcare” and “almost 100% literacy,” but do not be fooled by these entrancing and cool notions".

Speak to a Cuban who thought they would come back home after a year or two, but spent almost half their lifetime “temporarily” homesteading in Miami, New York, Union City, Houston, Boston, San Juan, or Chicago.
To those of you in my generation who are not Cuban, or to those of you who have never experienced a similar exodus: If you have already done these first steps, good. It is one thing to have an opinion, but it is another to have an informed opinion. It is difficult to negate the seduction of a revolution that brought with it “free universal healthcare” and “almost 100% literacy,” but do not be fooled by these entrancing and cool notions. It is one thing to see a practice on paper, but it is another to see a practice in action.
Cuba has tempted many to fall for its traps by remaining enigmatic and mysterious, but the spell can be lifted by our generation if we purposefully seek to engage and dialogue with Cuban theorists, critics, neighbors, and friends. The death of Castro leaves a small crack in the window of opportunity, and we must collectively take advantage of any airtime and relevance the plighted island receives, in order to advocate for the liberty of its people and the justice of its former constituents, which The United States will inadvertently have some responsibility in (i.e. lifting the Cuban Embargo). It is my generation of Cubans in America and Cuban-Americans that will ultimately fight for progress and extend a hand to those in Cuba who are stagnant in a perpetual freeze-frame of regression. Most importantly, it is my generation in The United States that will grasp my generation on Cuban soil faithfully when terror of El Comandante’s mythologized legacy renders them motionless.
The death of Castroism is in the palms of the young, and we must all become more politically, economically, historically, and socially aware of the issues at hand before we strike. La revolución comienza.