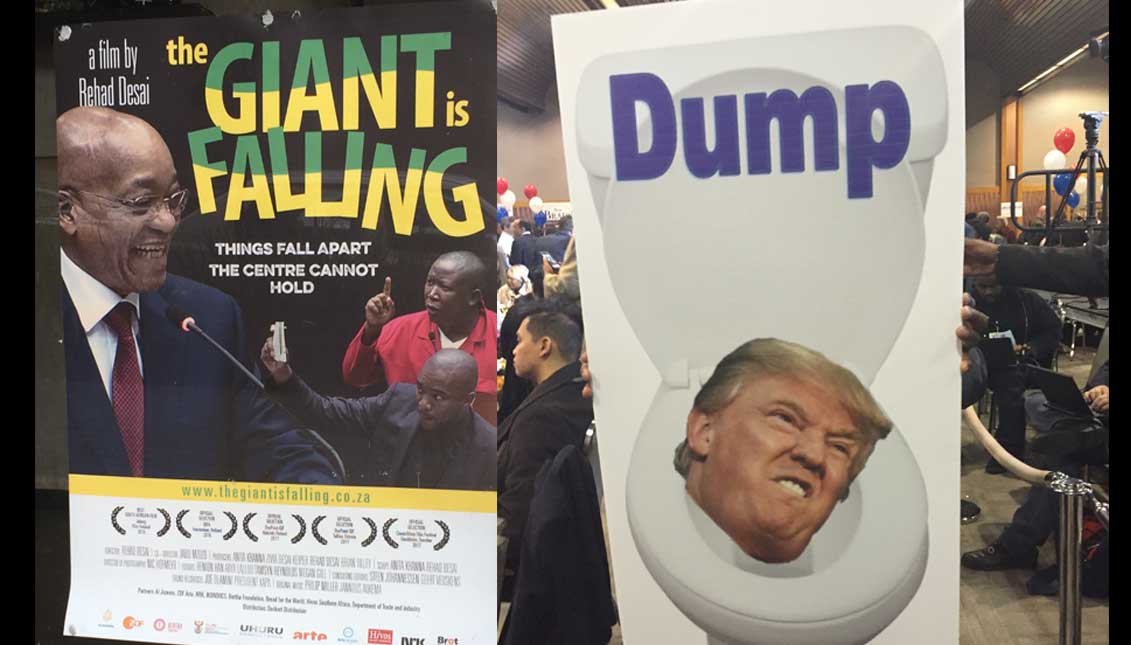 The presidents of South Africa and the United States not only have similar personalities; Have also been ridiculed for their steady "paws". Linn Washington Jr.

While U.S. President Donald Trump and South Africa President Jacob Zuma are not strictly two peas in a pod, both heads of state share some astounding…

The billionaire Trump and the once imprisoned anti-apartheid activist Zuma both share self-centered personalities, scandal ridden administrations, hardcore yet shrinking support bases and increasing demands for their respective removal from their top offices.

“You Americans elected a lunatic. And you knew he was crazy when you voted for him,” a cab driver in Johannesburg, South Africa’s largest city, told an American recently. “You have Zuma II.”

Trump and Zuma sparked respective firestorms this year with their firing of key government officials.

The Trump firing of FBI Director James Comey intensified interest in Congress and beyond into [alleged] connections between Russian officials and Trump’s election campaign.

The Zuma firing of his Finance Director resulted in devaluation of South Africa’s currency and a court order for Zuma to explain his cabinet shuffle.

Trump and Zuma each bash the news media, with each seeking to neuter probative reporting that often exposes malfeasance in their administrations.

Where Trump has threatened to corral the media that he calls an enemy-of-the-people, Zuma has stepped up censorship attempts, particularly at South Africa’s state funded national broadcast entity.

“Censorship is increasing in South Africa. Zuma wants a patriotic media that only tells good stories,” said a leader of the Johannesburg based media activist organization, Right2Know. “We oppose sunshine news propaganda.”

Trump and Zuma have embedded their daughters in ranking governmental positions despite the fact that neither child had previous experience commensurate to their appointed positions.

Similarities between Trump and Zuma also include their elevation to respective presidencies after revelations of alleged sexual misconduct that occurred in the same year.

Zuma won election in 2007, months after his 2006 acquittal on charges that he raped the daughter of a family friend in 2005. A court accepted Zuma’s claim that the sex was consensual during a trial where Zuma acknowledged having unprotected sex with the woman who was HIV positive. Zuma proclaimed he reduced the risk of contracting AIDS by taking a shower after that sexual encounter.

Trump won election in 2016 weeks after release of videotape showing him boosting in 2005 about making untoward sexual advances.

Trump and Zuma each have records of squandering tax monies on their lavish lifestyles.

Zuma has defied orders from a special prosecutor and courts to repay $13.7-million he spent to upgrade his private residence.

Trump, according to various news media estimates, cost taxpayers $20-million for weekend stays at his opulent Florida estate during just his first 100-days in office.

Trump bashed Barack Obama for playing a few rounds of golf during Obama’s two-term presidency yet Trump spent 21 of his first 82 days on golf courses.

A lecturer at the prestigious University of the Witwatersrand in Johannesburg termed Trump and Zuma “two sides of the same coin” – the proverbial Bad Penny.