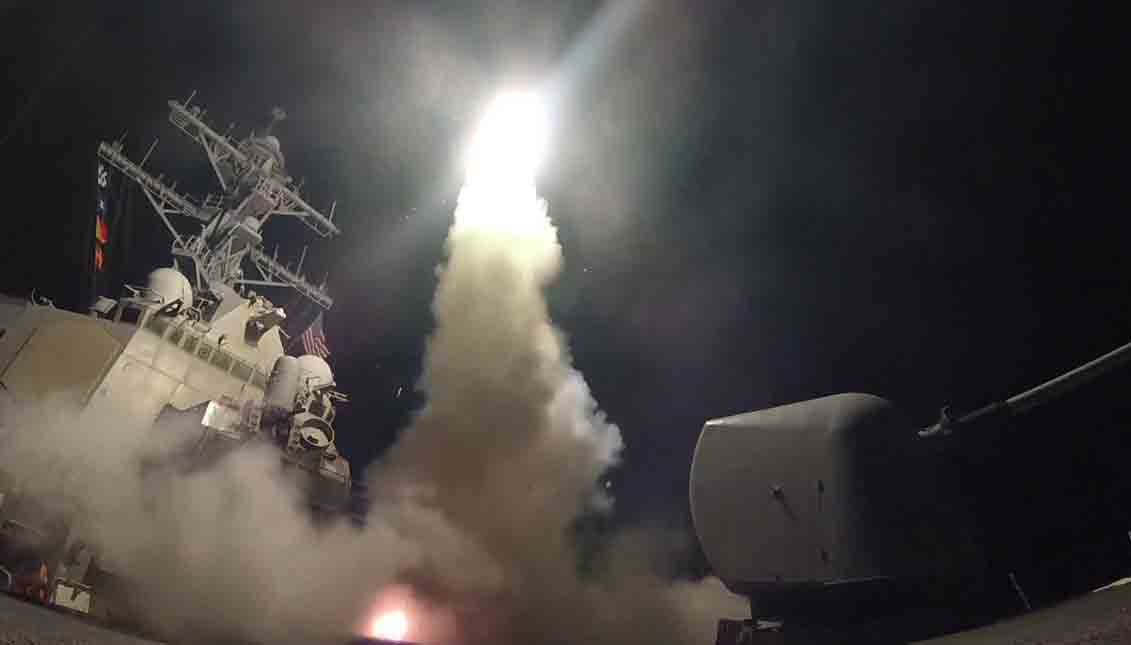 A handout photo made available by the US Navy Office of Information shows the guided-missile destroyer USS Porter (DDG 78) launching a missile strike while in the Mediterranean Sea, Apr. 7, 2017. EPA

[OP-ED]: A strike is not a strategy

There is much to applaud in President Trump’s decision to attack the Bashar Assad regime this week. It punished a regime that has engaged in war crimes against…

It ended Trump’s strange flirtation with Vladimir Putin on the Middle East. And, most significantly, it seems to reflect a belated recognition from Trump that he cannot simply put America first -- that the president of the United States must act on behalf of broader interests and ideals. Trump, as candidate and as president, had avoided the language of global norms and international order. Yet in explaining his actions Thursday night, he invoked both and ended his remarks with a prayer that Barack Obama would never have dared to make: “God bless America -- and the entire world.”

But as former Defense Secretary William Cohen pointed out Friday, “One strike doesn’t make a strategy.” U.S. policy on Syria remains unclear. The Trump administration had repeatedly announced that it had shifted away from the Obama administration’s calls for regime change in Syria. In fact, Trump had indicated that he was happy to leave the country to Assad as long as this would help defeat the Islamic State. Last week, Secretary of State Rex Tillerson basically affirmed that approach. On Tuesday, the day of the chemical attack on Idlib, White House press secretary Sean Spicer reiterated it. The missile strike appears to have reversed that policy.

If so, it is a major shift and raises important questions: Is the United States now engaged in the Syrian civil war? Will it use military force to help oust Assad? Do these actions help the Islamic State and al-Qaeda -- which are fighting against the regime? And what happens next in the overall war against the Islamic State?

Many of our allies have expressed support for the strike. But in an increasingly complicated global system, these countries look to the United States for a consistent strategy that can be relied upon over time. Trump’s foreign policy seems to change with every meeting, event or crisis. Having bashed Japan during his campaign, he invited its prime minister, Shinzo Abe, to his first Mar-a-Lago summit and extolled him as a true friend and ally. Having threatened to upend the “one-China” policy, Trump wound up meekly affirming it in a phone call with President Xi Jinping.

Trump does not deny his changes of mind. In fact, he embraces them as a virtue, describing himself as -- flexible. “I’m proud of that flexibility,” Trump said this week, adding that he also likes to be unpredictable. But there is a difference between unpredictability and incoherence. This week’s strike does leave one with the impression that foreign policy in the Trump administration is not being made by carefully evaluating a situation, assessing various options, weighing costs and benefits, and choosing a path. Instead, it is a collection of reflexes responding instinctively to the crisis at hand.

Trump’s military advisers provided him with a tactically brilliant option -- a small air base, whose destruction would produce fairly little physical or diplomatic fallout. But the strike will have minimal impact on the balance of power. Assad will remain in place, as will his opposition. If anything, the strike might embolden some opposition forces to fight on rather than surrender, and the bloodshed will intensify. The long-term prospects for peace in Syria remain gloomy.

No matter the complications, in the short term the president struck a blow against evil, for which I congratulate him. And if he was moved to this action because he saw heartrending pictures of children, that’s fine. I would only ask that he look again at those images. Perhaps they would move him not simply to drop bombs, but also to provide more aid to those war-torn people. Perhaps they would even move him to let some of those people escape their misery and find a home in the U.S.