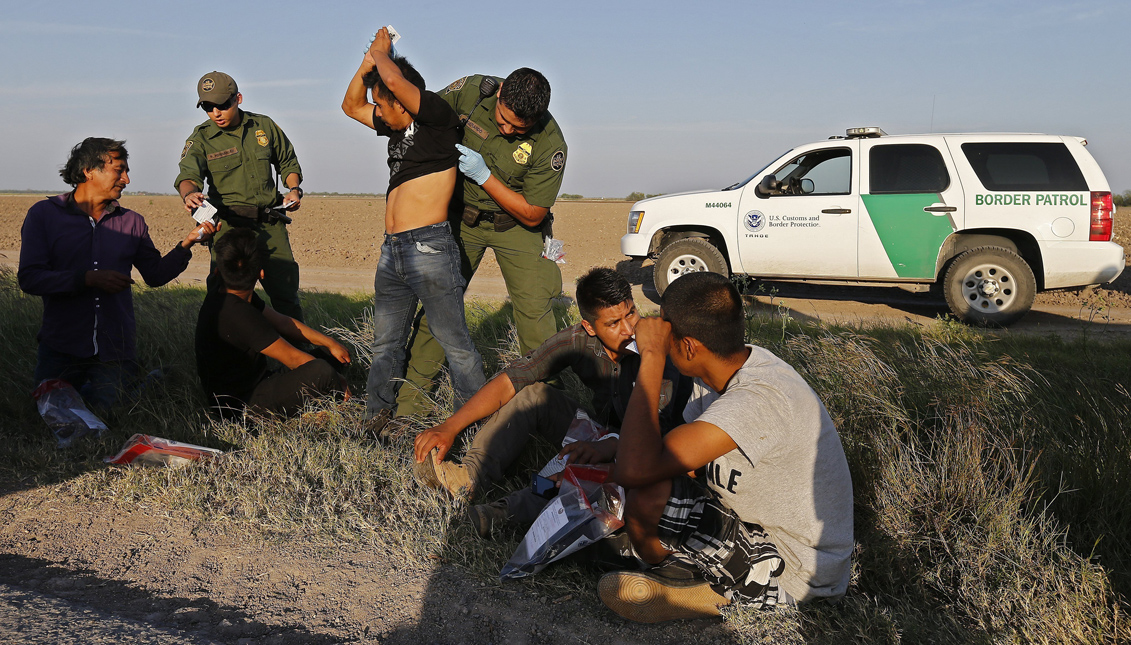 US Border Patrol agents detain several men suspected of crossing the Rio Grande to illegally cross the border with the United States near McAllen in Texas. US President Donald Trump told the joint session of Congress that the construction of the wall on…

Who knew that so many people cared so much about what happens to illegal immigrants?

Who knew that so many people cared so much about what happens to illegal immigrants?

For eight years, I tried to get readers and colleagues to see what activists and immigration attorneys quickly figured out: Barack Obama was the most anti-immigrant president since Dwight Eisenhower, who loaded more than 1 million Mexicans onto railroad cars in 1954’s “Operation Wetback.” Obama established quotas, eliminated law enforcement discretion and pressured local cops to enforce federal immigration law. All that helped him deport roughly 3 million people, divide hundreds of thousands of families and dump thousands of abandoned U.S.-born kids into foster care.

No one listened. Liberals were protective of Obama, but conservatives were just as protective of their false narrative that a Democratic president wanted an open border.

Now, the world of immigration enforcement is upside down.

Liberals have rediscovered their outrage at the mistreatment of the undocumented -- even though Trump is, for the most part, simply following Obama’s deportation blueprint.

The New York Times recently implied otherwise by reporting that Trump would enforce immigration law “more aggressively” and “find, arrest and deport those in the country illegally, regardless of whether they have committed serious crimes.”

In other words, Trump is likely to do pretty much what Obama did in swiftly removing juveniles, battered wives, ice cream vendors and traffic code violators.

Meanwhile, the same conservatives who charged that Obama wasn’t doing enough are now applauding Trump for going above and beyond -- when, in reality, the new president is mimicking the old one.

Apparently, this includes repeating the same mistakes. Obama tried to be both tough and compassionate by pushing the narrative that he was removing the bad illegal immigrants and keeping the good ones. This approach only creates more confusion, and it never works.

Here’s why. The immigration debate is about human beings. And human beings are a complicated bunch.

Moreover, everything about the immigration debate is complicated -- why these people left their home countries, the circumstances under which they came to the United States, whether they committed crimes once they got here or whether we should treat as a criminal offense the infraction of overstaying a visa or crossing the border without proper documents.

You can’t just wade into that river of complexity and neatly separate undocumented immigrants into “good” and “bad.”

On the one hand, Obama created Deferred Action for Childhood Arrivals (DACA) to protect so-called Dreamers who were brought here as children. Obama described them as “Americans in their hearts, their minds, in every single way except one -- on paper.” But he also said that his administration was removing “people who are dangerous, people who are gang-bangers or criminals.”

Now Trump is playing the same game. Even though he is rankling supporters by breaking his campaign promise to “immediately terminate” the executive action allowing Dreamers to remain in the United States under certain conditions, the president now calls these young people “incredible kids” and pledges to deal with their fate with “great heart.” At the same time, Trump -- who also campaigned on the promise of removing the “bad hombres” -- has maintained his hard line against what he considers the undesirables in the illegal immigrant population.

“On the border and throughout our country, we’re getting the bad ones out, the bad people, gang members, drug lords, in some cases, murderers,” Trump said Tuesday during an interview on Fox News.

Further muddying the waters, on the same day, Trump reportedly said once again he was open to the idea of legalizing millions of undocumented immigrants.

So, pray tell, how do you tell a good illegal immigrant from a bad one?

This is how cynical politicians do it: When they need to appear tough, they’ll say that “criminals” include people who merely re-entered the United States after being deported because their kids were on this side of the border. Or those who used fake Social Security numbers to clean toilets even though they would never receive benefits. When elected officials want to be seen as compassionate, they’ll change their tune and shrink the ranks of “criminals” to include only dangerous felons guilty of murder, assault, rape, armed robbery and other serious offenses.

People say our immigration system is broken. True enough. But the really bad news is that something that many folks see as a remedy -- our deportation policy -- is just as broken.