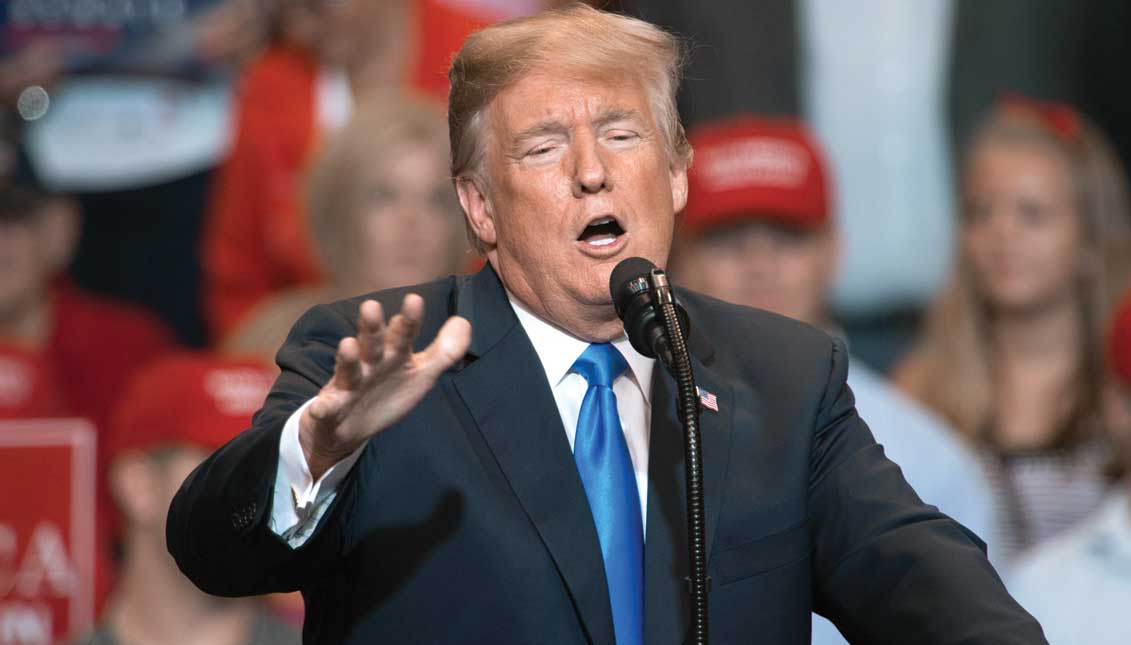 Trump’s insults not a laughable matter

How much longer will the American people tolerate a lying, cruel, racist president seemingly intent on undermining the nation’s democratic institutions?

It would be logical to think that the constant flow of rotten news generated by Donald Trump and his minions would make the columnist’s job an easy one. It should be a matter of plucking some of the many poisonous flowers growing in the president’s fetid swamp and building your piece around them.

That’s not the case. On the contrary, it is getting harder and harder to choose what fresh outrage, or rather outrages, to write about precisely because there are so many.

For instance, I could write about Trump’s despicable — and intensifying — war on the free press, its similarities with the behavior of some of the dictators and strongmen he has professed admiration for, and its terrible implication for democracy.

“The Fake News hates me saying that they are the Enemy of the People only because they know it’s TRUE,” he tweeted on Sunday. “I am providing a great service by explaining this to the American People. They purposely cause great division & distrust. They can also cause War! They are very dangerous & sick!”

Unbelievable as it may sound, now the carnival barker who occupies the White House is suggesting journalism and journalists, which he indiscriminately labels “fake news,” may even start a war.

If these were normal times, Trump’s words would be taken as the publicity-seeking ranting of a well-known New York shady character, worthy only of despise or a good laugh. But these times are far from normal and the shady character is now the president, no less. And as such, his words, still despicable, have metamorphosed from laughable to dangerous.

“I’m very worried that the hostility whipped up by Trump and some in conservative media will result in somebody getting hurt,” wrote CNN’s Jim Acosta, who last Tuesday had been harassed, insulted and threatened at a Trump rally in Tampa, Fl.

On Thursday Acosta asked White House Press Secretary Sarah Huckabee Sanders to tell the nation that the White House does not consider the media to be the enemy of the people. Following Trump’s playbook and increasing the already untenable tension between the White House and the media, she refused to do so. Yes, the potential for violence is real and growing — and it’s the president’s doing.

Or I could choose to write about how the president, whose penchant for insulting anybody and everybody is notorious, reserves a very particular and pointed offense for African Americans.

According to him, Rep. Maxine Waters (D-California), CNN host Don Lemon and NBA superstar great LeBron James are all dumb, low I.Q. people. This, of course, is a typical prejudice of ignorant racists who, like the president, still ridiculously believe themselves to be smarter than blacks and Latinos. Perhaps that’s why he resents so much Barack Obama, who, whatever his faults, makes Trump look by comparison as the bumbling and crass individual he is.

“Lebron James was just interviewed by the dumbest man on television, Don Lemon. He made Lebron look smart, which isn’t easy to do,” Trump tweeted Saturday morning. He had also insulted Waters the previous week during a campaign rally in Pennsylvania, claiming she has a “Very low IQ.” That from a man who half of the time doesn’t know what he is talking about.

There are many more Trump disasters and outrages being revealed every day. They may be worth commenting about, but as you can imagine, there is not enough space or time anywhere to write about all of them.

How much longer will the American people tolerate a lying, cruel, racist president seemingly intent on undermining the nation’s democratic institutions?

In less than three months there will be midterm elections and voters can restore some dignity and compassion to Washington. But for that to become real, everyone must go out and vote on November 6.