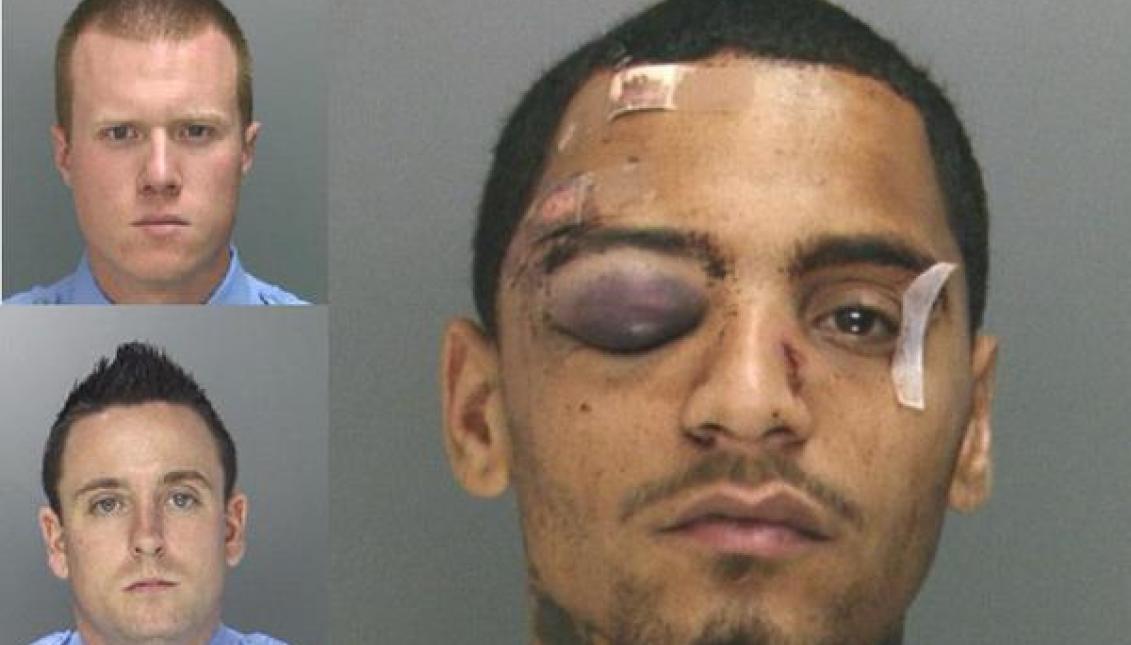 Najee Rivera, two white cops and the brutality of justice in Philadelphia

It is a story that has become tediously familiar. Two white cops brutalize a person of color. It is captured on video. And, despite the clear evidence staring…

It is a story that has become tediously familiar. Two white cops brutalize a person of color. It is captured on video. And, despite the clear evidence staring them in the face, the mostly white jurors acquit the cops.

If the story were fiction and an author kept writing it the same way every time, we’d label  him or her a hack, and move on to a less predictable narrative.

But this isn’t fiction.

In the city of brotherly love, if you are brown or black and cops brutalize you, they will be exonerated like Najee Rivera’s aggressors were yesterday. Period, end of paragraph, end of story.

I cannot embed the video of officers Sean McKnight and Kevin Robinson brutalizing Rivera here for you to watch, but if you go to this link you can see how they mowed him down with their police cruiser and then ganged up to beat him so badly they fractured his orbital bone. You cannot see the batons with which both cops battered the 23-year-old, but you can note the abandon with which they assaulted him and you can see that he was helpless under their barrage.

Here is what we know the jury heard about McKnight and Robinson: that they were good people.

Lots of character witnesses vouched for the cops, and Rivera wasn’t there to give evidence to the fact that people can be nice to their family and their pets and still treat other human beings — those they thoroughly “other” when they encounter them in neighborhoods like 6th and Cambria streets — in barbarously subhuman ways.

Rivera wasn’t in court to tell his side of the story, in fact, because he is dead. Many months after he was brutalized by the cops, he was shot while allegedly trying to break up a fight at C and Somerset streets. While McKnight and Robinson can’t be directly implicated in his death, they can certainly be implicated in the tragedy that Rivera’s life became as a consequence of their choice to brutalize him.

McKnight and Robinson filed charges against Rivera — aggravated assault, reckless endangerment, and resisting arrest — which prompted his employer, Children’s Hospital of Philadelphia, to fire him. Rivera tried hard to get his job back, especially after his girlfriend (Dina Scannapieco) found the surveillance video that utterly contradicted McKnight’s and Robinson’s report of events and the District Attorney dropped the charges against Rivera. The city paid him a settlement of $200,000, which Rivera said was swallowed up by the hospitalization and medical costs incurred because of the cops’ beating.

Rivera went back to el Barrio. To the poorest neighborhood in Philadelphia, where more than half the residents subsist on incomes substantially beneath the poverty line. To a neighborhood in which the city has invested next to nothing as far as job creation and opportunity go, but which has garnered plenty of attention from the city’s finest where stop-and-frisk and arrests for drug possession are concerned. To a neighborhood that a white, cop-loving judge in another police brutality case used as an excuse when exonerating another out-of-control cop in the poor, Latino neighborhood. Rivera went back, and found more trouble — much of it undoubtedly of his own making — and paid with his life for being poor, Latino and jobless in a city that considers us expendable when it considers us at all.

Here is what we know the jury saw about McKnight and Robinson: that the cops went out of their way to hit Rivera with their car and then ganged up to beat him senseless.

Whether you think McKnight’s and Robinson’s arrest of Rivera was justified by the suspicion that Rivera might have been high the night they brutalized him, or that he might have ditched a baggie of drugs before being pursued (as the defense attorney implied during his closing statements), you cannot dismiss the brutalization. That evidence is indisputable on the video.

Ultimately — and horrifically — a majority white jury found that cops running down a “suspect,” hitting him first with the police cruiser and then with the retractable metal batons known as ASPs, is acceptable behavior for cops in Philadelphia. It is behavior that is rewarded by restoral of jobs, pensions, and all of the other benefits accorded to cops in our city.

Justice, in our city, is an infuriating story told over and over again in exactly the same terrible and alarming way.

Rivera’s mother, Violetta, says she will appeal yesterday’s decision. I hope she does. But  I don’t hold out much hope that the story will end differently. This is, after all, Philadelphia.