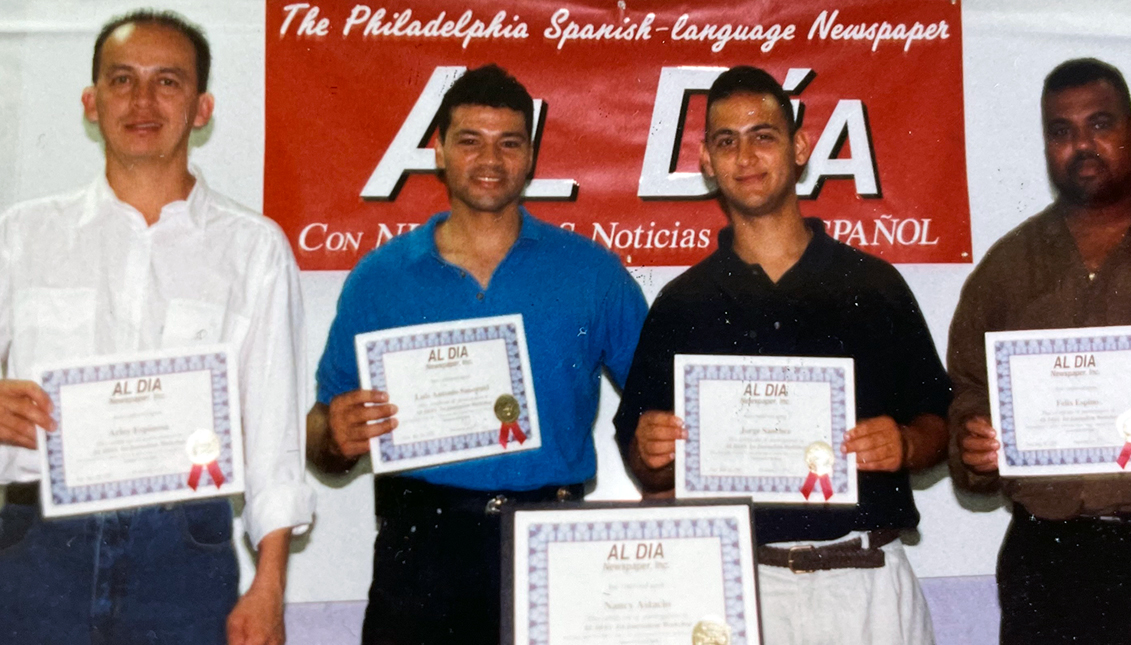 Their education was barely high school, but with them AL DÍA went ahead and staffed its first modest newsroom in the ‘90s.

I still remember when I hosted the first “Writing and Reporting Workshop,” in a dark basement of a church on Nedro Street, in the Olney neighborhood of North Philadelphia, to train what would be the first class of AL DIA’s news writers.

As a news organization in the Hispanic neighborhood, we didn’t have the luxury of hiring straight from the School of Journalism, where there wasn’t any way a single graduate of Hispanic descent in 1991 — not to mention the even more evident fact that we couldn’t afford a salary if we were to find the first one.

Like everything else in AL DÍA’s journey, we pushed forward regardless and tried to make the best out of the limiting circumstances.

We were able to find second-hand MAC Plus computers in a shop we found in California.

We ran an ad in our black and white newspaper asking for anybody who wanted to attend a workshop on “Writing and Reporting” to please apply.

I called pastor Efraim Cotto from the nearby church and asked him if he was kind enough to allow us to host the classes in the basement of his building on Nedro and 6th Street.

AL DÍA was then still a one-man, home-based operation on 5th Street, four blocks away from the church where we held the first “AL DÍA Writing and Reporting Workshop.”

AL DÍA was then still a one-man, home-based operation on 5th Street, four blocks away from the church where we held the first “AL DÍA Writing and Reporting Workshop”— to the derision of some people in the neighborhood.

The “Writing and Reporting Workshop” was financially sponsored by PNC Bank, thanks to Mr. Donald L. Haskin, a former writer for the Philadelphia Inquirer and then-Communications Officer for the financial institution, and later thanks to Mr. Charles Fancher, a PR man for the ‘Inky’— way back in those long-gone years of the 1990s when the Philadelphia Inquirer was the strong operation on Broad street. At the time, AL DÍA was struggling to barely survive in the Latino neighborhood of North Philadelphia.

This old memory buried under an intense 25 years of publishing, bubbled up when I saw in a social media posting, a picture of the new, promising faces of young reporters who are now joining the multicultural, multimedia and multilingual news media apprenticeship program at the AL DÍA Foundation.

When we were crawling in North Philly, these youngsters were, too, probably stumbling as we were — in their case as toddlers, most likely learning somewhere in a kindergarten or elementary school playground.

Today, in their mid-20s, Tiffany, Oscar, Héctor,  Kianni — to name the most recent ones — are the strong prospects to become the new storytellers the city urgently needs to properly document its next chapter — now totally multicultural as these youngsters are — of its rich history.

Not being fully aware, AL DÍA has been training reporters non-stop over the past three decades, sending them after “graduation” as alumni of AL DÍA to writing positions from Philadelphia to Los Angeles, in a coast-to-coast generosity some organizations which have benefited from that trained talent are not fully aware of.

One, for example, who came from El Paso, Texas, is today in Los Angeles, California, serving COMCAST, the largest corporate entity in our hometown. Others now work here at the Philadelphia Inquirer, WHYY, or NBC 10, and others have gone to work in government and media relations as bilingual communication experts. 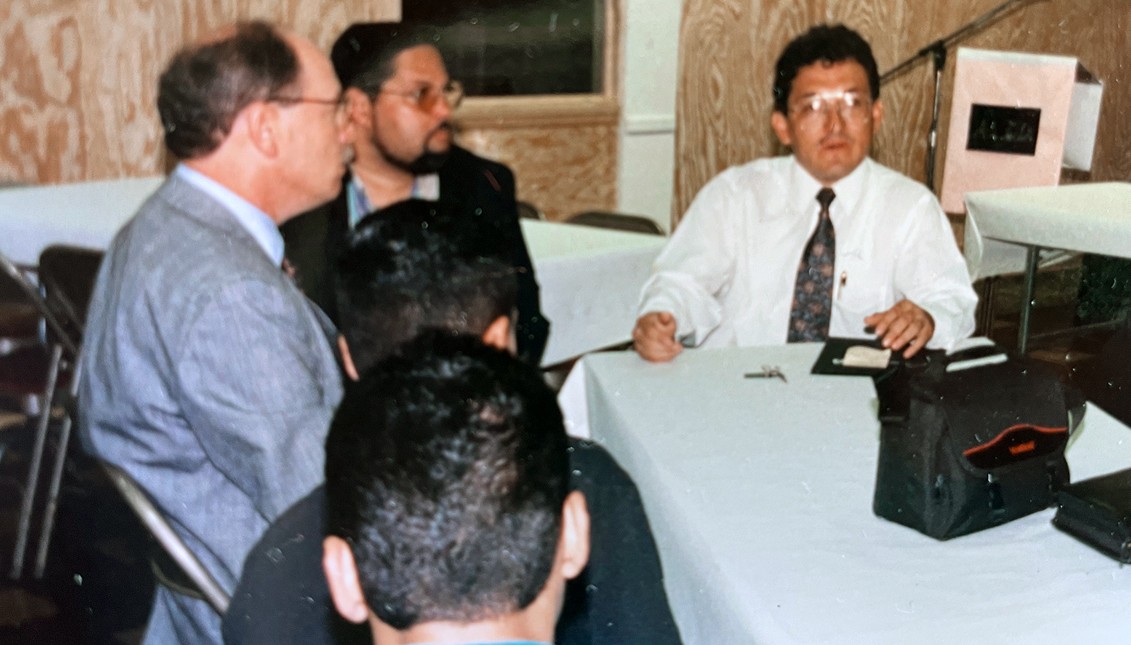 From left to right, Donald L. Haskin of PNC Bank, sponsor the AL Día workshop, Rev. Efraim Cotto, pastor of the church were it was hosted, and Hernán Guaracao, instructor of the workshop. (AL DIA Photo Archive)

AL DÍA, 25 years later, is no longer taking graduates from High School, as we were willing to do in the early days in Olney (Geradline Rosado, from Edison High, comes to mind as the last one in 2000), but now from the new classes of graduates coming out of J-schools, with their degrees completed and all, but with little or no experience to make them employable in a professional newsroom setting.

They are, however, excellent material in the AL DÍA Foundation where we now take them in raw and give them the opportunity — fully compensated —  to gradually sharpen their writing quills, and more importantly, muster their confidence with all the patience needed to make them the new multicultural, multimedia and multilingual professionals our media industry urgently requires.

In the middle of this massive reinvention of this news media industry — with layoffs, retirements, newspaper closures and disruptions of all kinds — the AL DÍA Foundation’s ongoing mentorship is our modest contribution to our challenged journalism practice and its current news media operations.

AL DÍA Media Educational Foundation is now taking it on to the next level, thanks to a seed donation from AL DÍA Founders, and a contribution made by the Lenfest Institute of Journalism.

AL DÍA Media Educational Foundation is now taking it on to the next level, thanks to a seed donation from AL DIA Founders, Elizabeth and Hernán Guaracao, and a contribution made by the Lenfest Institute of Journalism, thanks to Board Chair David Boardman and Executive Director, Jim Friedlich.

Today, Temple University’s Klein College of Media and Communication, Cabrini University, University of Arizona, and the University of Texas are some of the AL DÍA Foundation’s partners in this effort to enact in Philadelphia what Eric Newton called “The Hospital Model of Journalism Education.”

To give the young reporters, once they graduate, the one-year of required practice to be finally ‘licensed,’ so to speak, to perform with confidence and the solid skills required in the profession they went to school for with great financial sacrifices from their families.

From our heart, this is simply the effort to continue empowering young representatives of our Latino and multicultural communities “to write their own stories.”

I am confident in this coming year, 2022, the need to actively support projects like this will be fully acknowledged and supported.

When we do, these new generations of multicultural, multimedia and multilingual journalists, of the kind AL DÍA has been quietly preparing for almost three decades, will eventually come more often to replace, with good intellectual credentials and better practical skills, the many meritorious professionals nearing the end of the careers in legacy news organizations.

With help from all of us, the elders in the profession, they can also come forward to boldly occupy, as entrepreneurial journalists and new media leaders, the ample space now wide open for the most disciplined and forward-looking to stand tall in this amazing news media experimentation of the 21st Century, disrupted by technology, yes, but even more deeply by the vast demographic transformation of our nation.