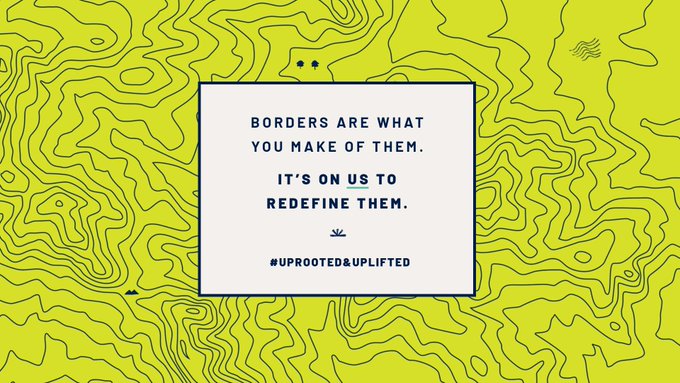 Words in the media have painted migrants coming to the country as aggressive, but it’s the depiction furthest from the truth.

On Thursday, April 29, the nonprofit agency RAICES launched a digital campaign known as Uprooted and Uplifted, that seeks to shift the narrative on immigration.

Through highlighting the names, faces, stories, struggles and triumphs of migrants, RAICES hopes to remind and educate society that “nothing about our borderlands is welcoming,” and that the cruelty is something that we created, but something we can also transform.

The introduction video, which is posted on their Twitter page, emphasizes that moving: whether physically changing location or simply changing one’s mind or lifestyle, is an innate aspect of human life, and nothing to be stigmatized or criminalized.

The time to change the narrative around immigration is NOW.#UprootedAndUplifted looks to remind & educate folks that nothing about our borderlands is welcoming.

It begins with joyful imagery of people and even animals, like butterflies, moving and exploring in ways that are most natural to all living things. But the music quickly changes its tone and the imagery shifts to more serious situations, showing the injustices faced by migrants making the treacherous journey to seek a better life.

“No matter how hard our leaders make it, no policy will ever stop people from moving. We don’t have to live with this, we can do something better. We created this cruelty, and we can change this. Because migration is a human right,” the narrator says.

Hi fam! Today we are launching the #UprootedAndUplifted campaign at @RAICESTEXAS, which will focus on changing the narrative about the border and migration. For the past few months, we have been serving the children in detention & hearing their stories. https://t.co/PWRhbZaLSL

The Uprooted & Uplifted campaign is its newest effort to do just that.

Throughout the previous presidential administration, anti-immigrant rhetoric and xenophobic beliefs led to harmful policies that disenfranchised immigrants and those in the process of crossing the border to seek asylum — many of them of Latin American descent.

In recent months, the language being used to describe what’s happening at the border has served to further the negative views that many Americans have about migrants. Words such as “surge,” “influx,” and “breach,” have painted unaccompanied minors as insurgents and inherently aggressive.

This country was created through a brutal genocide of Indigenous people that had settled on the land centuries ago, and through colonization, what we now know as America was formed.

But what people often seem to forget is that these colonizers were migrants themselves, who came from their home country in search of a better life. And over time, more and more people arrived from all over the world, making the U.S. the “melting pot” that it is.

Even so, immigrants, particularly those that are not white, are viewed in a very negative light, and gaining citizenship and equal rights in sectors such as education, the workforce and healthcare, has turned into an uphill battle.

Since the beginning of the Biden administration, the White House has promised to prioritize improving the current immigration system, yet within the first 100 days of Biden’s presidency, not much has changed.

.@JoeBiden touts that "we’re sending back the vast majority of the families that are coming."

This is not why immigrants organized to him elected.

For Republicans, "sending them back" will never suffice.

Biden needs to be committed to #MigrantJustice.https://t.co/RKUSlvygti

RAICES’ website states that the narrative around immigration has changed over the years as administrations have come and gone, but the stories remain the same.

“Immigrants deserve to have their humanity respected and prioritized, and as long as the Department of Homeland Security leads on immigrant reception, there will be imprisonment instead of a humane and hygienic welcome,” the site reads.

RAICES is asking people to get involved through signing up for regular campaign updates through email and text messaging, so that it can tackle the roots of these issues and slowly but surely unpack the “centuries old lie of a ‘dangerous borderland.’’

The nonprofit is also encouraging supporters to fund their work through monthly donations that will allow its legal, social and advocacy programs to “make our borders a more welcoming place.”

Supporters can also copy and paste sample social media posts to spread the word about the campaign on Facebook and Twitter.

Erika Andiola, chief advocacy advisor for RAICES, tweeted last Thursday, encouraging her followers to watch the video and spread the word about the campaign.

“It's been painful to see how the mainstream narrative doesn't focus on their stories, why they left and how they are being treated,” she wrote.

Andiola also posted about a young Guatemalan teenager named Gilberto, who arrived at the border at 13 years old and was kidnapped twice. After a years-long process, he was finally granted U.S. asylum.

“These are real stories. The human story. The story of Gilberto. Say his name: Gilberto. Not a ‘member of the surge’ or ‘an illegal alien.’ A kid who went through hell, but made it to the U.S. to follow his dreams of home & safety,” Andiola wrote.

If you believe...
In freedom of movement without criminalization
The border is sacred to indigenous folks & surrounding communities.
People have the right to migrate.

Join me in the fight to redefine the border. #UprootedAndUplifted https://t.co/ev2YuOBxtO

It seeks to change the narrative through the amplification and uplifting of migrant stories, and depicting the conditions that lead people to be uprooted and seek a safer place to live.