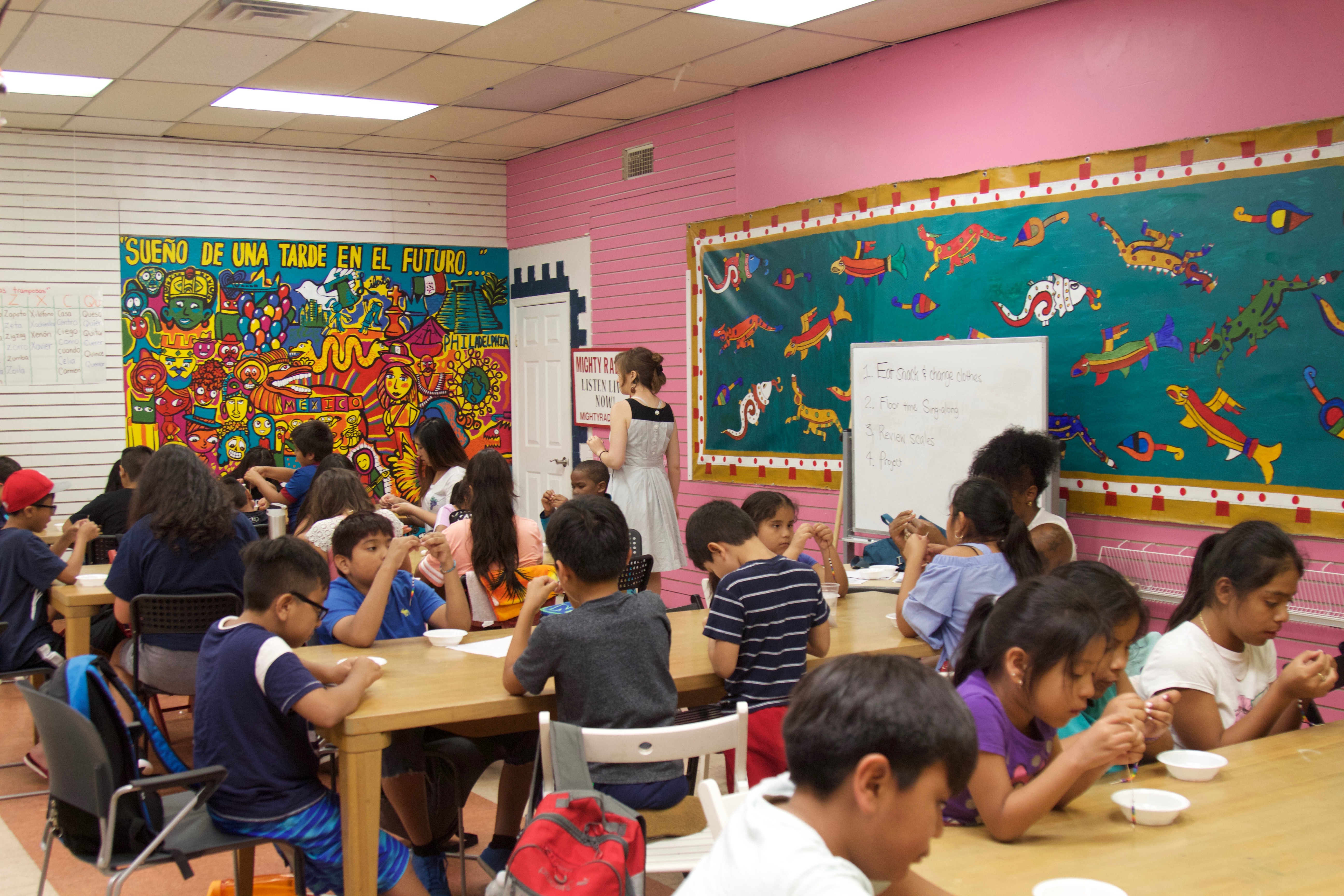 The nonprofit’s El Futuro site in the Italian Market, serving mostly the Mexican-American community, has only grown in importance since Donald Trump was…

On an afternoon in late July, the room at Mighty Writers El Futuro — a narrow building squeezed in between vendors at the Italian Market — resounds with the singing of a group of kids, enumerating their "favorite things” in chorus from the classic song from “The Sound of Music” as they use beaded song bracelets to keep them on key.

As he searches for a quieter place to talk, Mighty Writers founder and director Tim Whitaker continues to describe the many ways that the tune at Mighty Writers El Futuro site always stays the same, despite the swirl of political changes that have occurred in the United States since the Philadelphia nonprofit was established in 2009 and opened one of its now seven sites in the heart of Philly's Mexican-American community in the spring of 2015. The environment for the young “mighty writers” in the colorful and brightly lit room remains a safe space focused on uplifting and empowering the voices of young Latinos, many of whom are coming from a Mexican-American community that is “under siege” in the Trump era, said Whitaker.

“As an organization, I think it’s important for us because we’re standing with them... But it’s also important for them to know that not everybody in this country is like Trump, or sympathetic to him,” said Whitaker.

Many of the students at the site are prepared for the "worst case scenario" of immigration enforcement and deportation affecting their own parents and family members — "a crazy thing to live with when you’re a little kid,” Whitaker continued. “There’s just no getting around the fact that there’s a level of fear in their lives that is really unfair.”

Madeline Karp, director of the El Futuro site, said the site instructors and volunteers strive to make the message of welcome as clear as possible: “We hope that we are communicating that the doors are open, that we are a safe space, you can express yourself here, be who you are, and that there’s no penalty for that at all,” she said. “Come as you are.”

Karp, who is bilingual, said that having an atmosphere in which teachers and students can switch back and forth between English and Spanish with fluidity and comfort — sometimes starting a joke in English and finishing in Spanish “because the punchline is better in Spanish” — is an important aspect of cultivating an environment in which the majority Latino students feel free to express themselves in both languages and develop their writing skills without the pressure to use only one language at a time.

After all, the world that the students live in day to day has no finely delineated borders between one language, one culture and the next. On an afternoon in early August, students in the Teen Scholars program at Mighty Writers laugh and joke, looking at their phones, bouncing English and Spanish phrases off one another in the constant ping-pong game of youthful chatter. They discuss different ways to say they're "enchilado," meaning that your mouth is burning from eating something spicy, while also explaining the finer details of the spelling and meaning of Philly slang like “jawn" to a recent transplant to the city (in the form of this reporter). 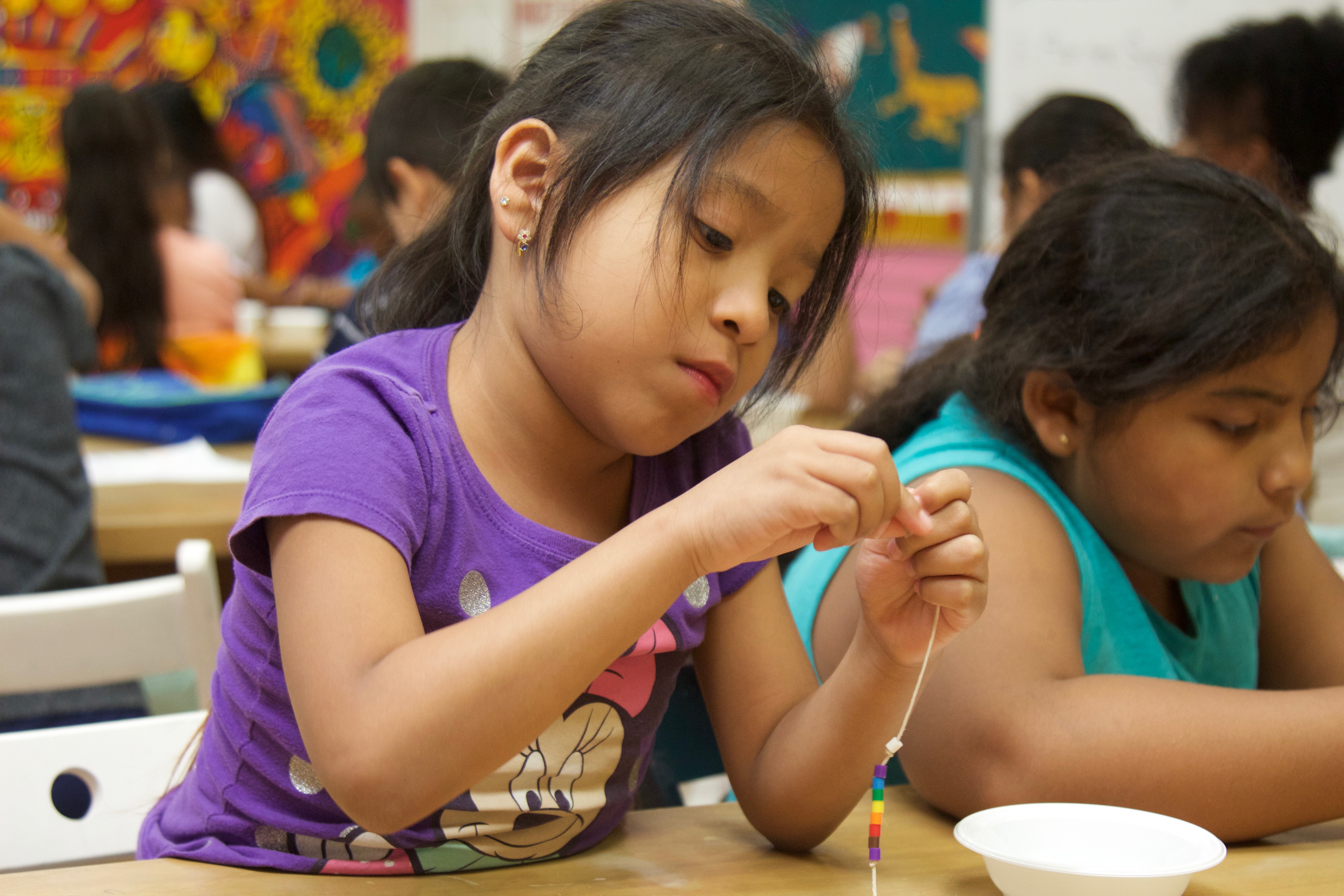 Karp said that the center’s dual language approach is also “filling a need” by facilitating communication with parents , many of whom are more comfortable speaking in Spanish, in a role that sometimes extends outside of the Mighty Writers space.

“We find that we’re often the liaison between the parent and the school,” Karp said. “I can’t tell you how many parent-teacher conferences I’ve gone to, or emailed the teacher to say, 'Can you explain to me exactly what’s going on so that I can let mom know what she needs to work on with her kid at home?'”

Though the site itself is “very progressive and modern” in its focus on literacy skills, using the internet as a research tool, and technology, Karp noted that it is at the same time rooted in a more paper-based and interpersonal process. Parents often come into the building to register their kids in person, instead of calling or submitting a form online.

For Irlanda Ramirez, whose 9-year-old son was in the school year program and is participating in the summer program along with her two nephews, 10 and 8 years old, the site provides programming that is “very good, [and] very educational.” Ramirez highlighted the fact that the program encouraged the students to volunteer with service trips every Friday during the summer camp as a valuable aspect of the programming. 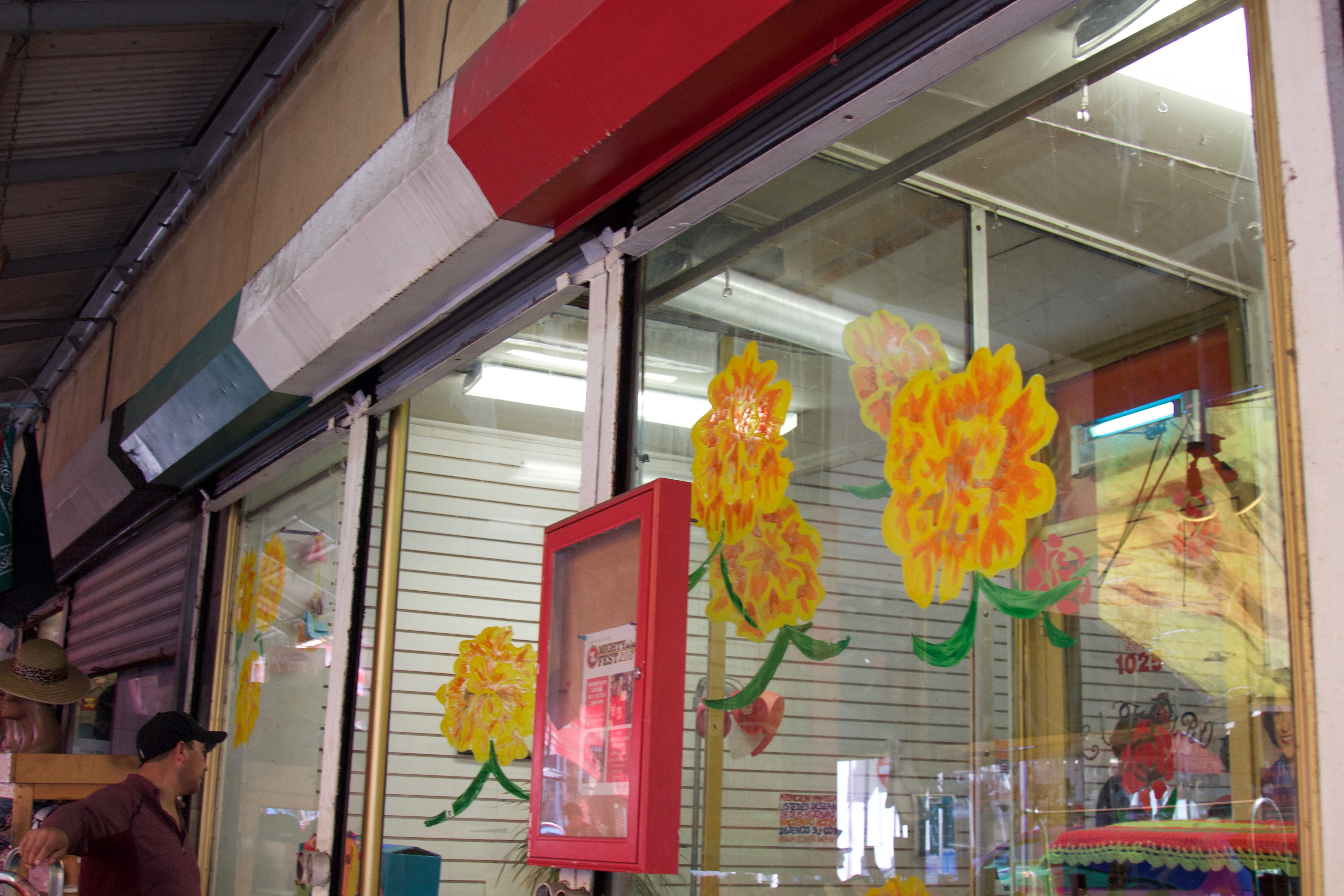 “We started once a week at a small space on South Street after I had become friendly with a woman who’s an activist in the community, and I was so impressed...because it was a Saturday morning, 10 o'clock in the morning, and all the kids were there, on time,” he said, adding that on the basis of the enthusiasm of the students and the size of the Mexican community in the area, they quickly began to work to find a permanent space for programming.

From those humble beginnings has grown a full program with a purpose that is increasingly urgent in today’s political climate.

Writing it down, speaking up

Offering free, year-round classes which include workshops and classes for everyone from toddlers to teens, the El Futuro site serves as a space where students learn to express their opinions clearly, both in writing, and verbally, said program coordinator Mario Meza.

Meza, who facilitates the teen scholars program, said that the most important aspect of their work at Mighty Writers is to “make [the students] feel that they have a voice" — especially in terms of issues that affect them, their families, and their community.

This became a focus in the school-year program, Karp noted. The instructors stopped writing for a couple of weeks in order to do a social studies unit on Article 2 of the Constitution so that the students could become educated on what the powers of the president actually were - the takeaway being, said Karp, that “this big scary figure is not all powerful, he can’t just do whatever he wants, so let’s learn about the limitations.”

“I think it’s really important that we’re able to talk about that kind of stuff and to really tackle hard issues with kids because they’re not too young, they know what’s up,” she added. 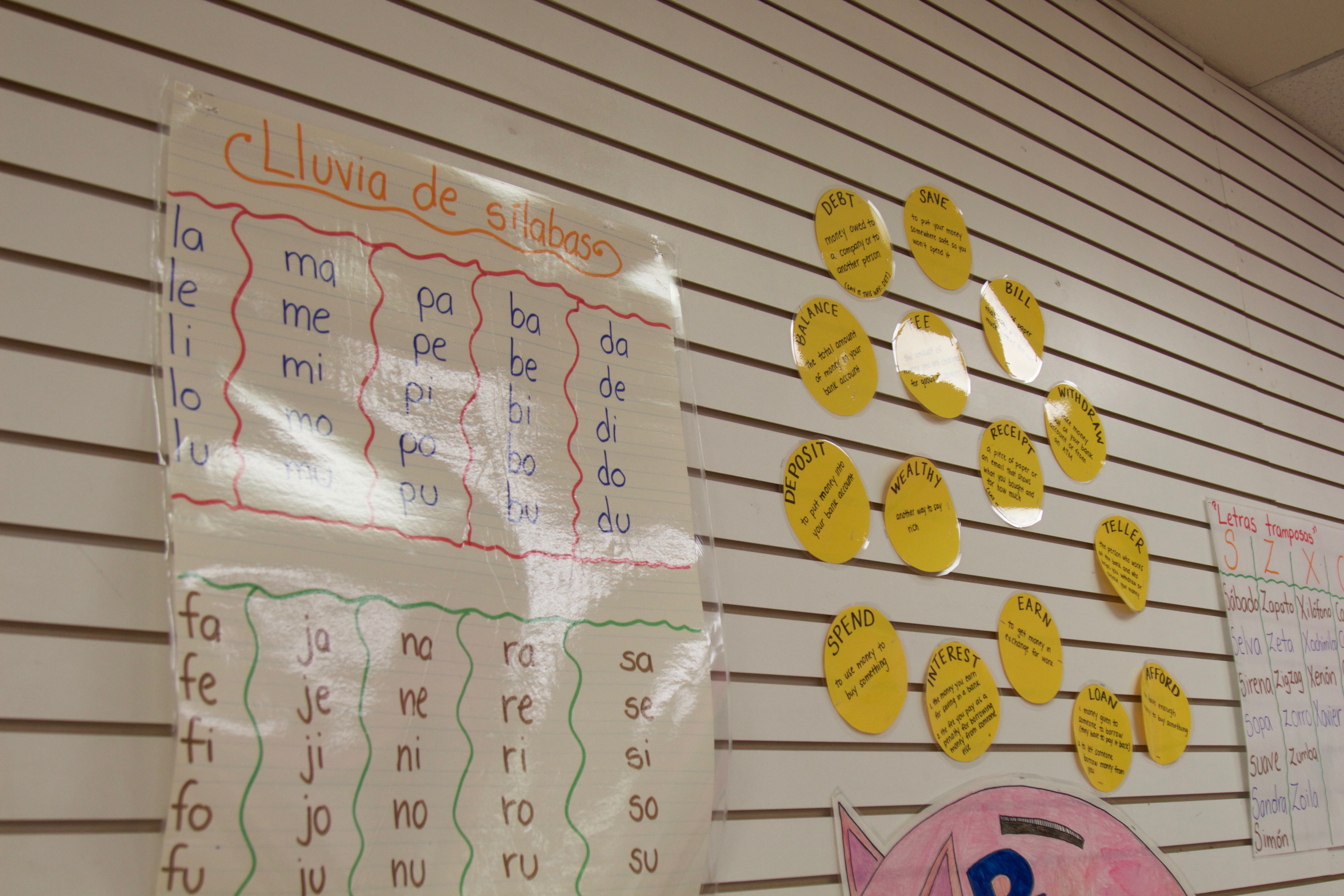 So last school year, when the students wanted to write persuasive essays about why they felt that Trump should not be president, the instructors agreed — with one caveat.

“We’re going to qualify it by saying that you can’t just say, 'Because he’s orange, because he’s old, because he’s mean...'. We need to really think about real reasons and elevate our language and elevate the way that we’re talking about it because, unfortunately, one of the things that we learned from the Parkland shooting is when kids speak to adults on an adult level, people listen," Karp said. "So talking to the kids about how there’s a lot of power in what they’re saying, but that they also need to be strategic in how they say it."

Most recently, some of the students were able to exercise their voices by making bookmarks to accompany a book donation that was destined for children at the Berks County detention center for immigrant families. Though the detention center suddenly canceled a scheduled drop-off and turned the book donation down, Mighty Writers found another center for unaccompanied minors and children who were separated from their families, called Holy Family Institute in Pittsburgh, which was willing to accept the gift. Whitaker said that they plan to build a movement and develop better infrastructure for the initiative to get more Spanish-language and bilingual books into the hands of recently-arrived immigrant children across the country. 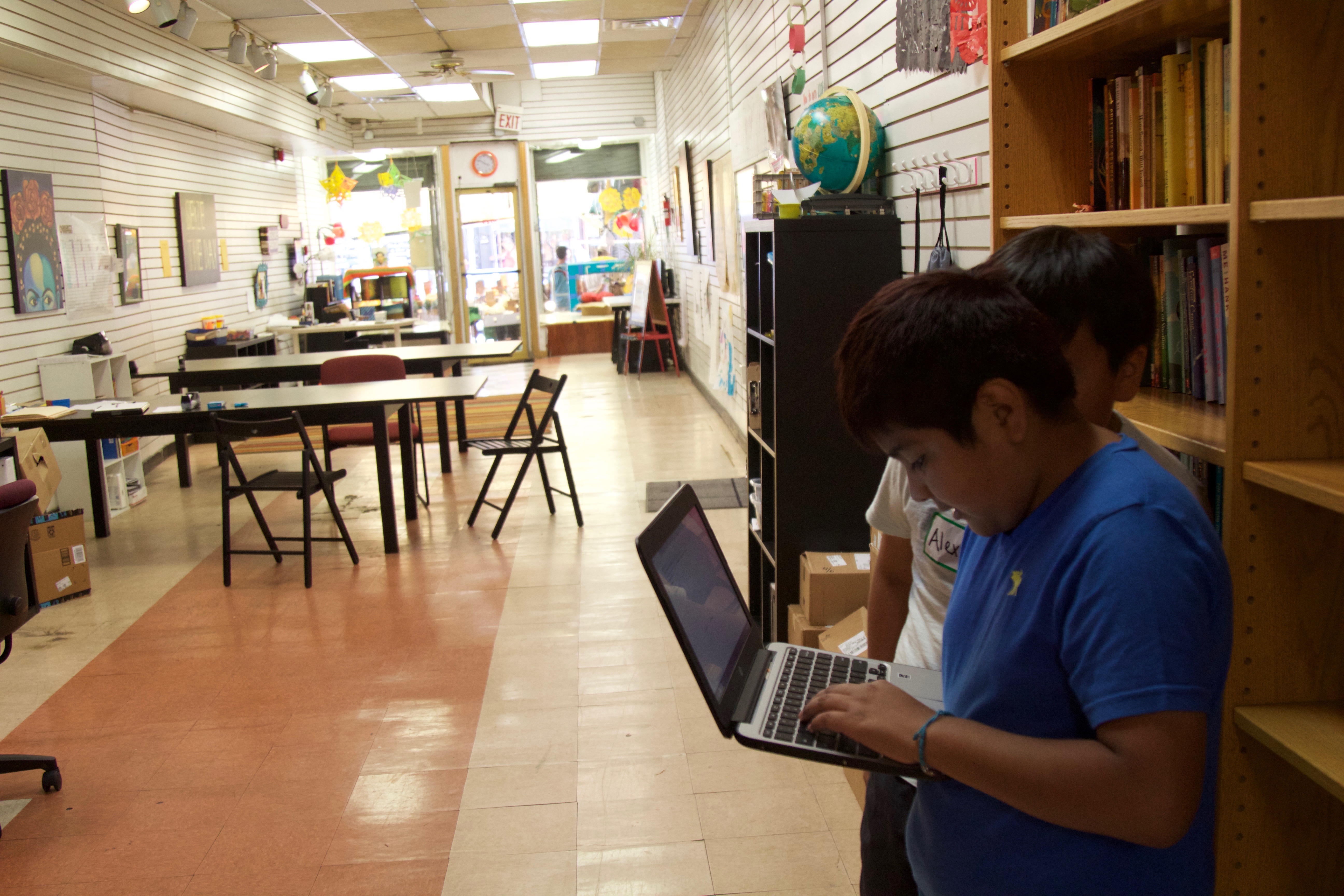 Karp said that the students’ desire to connect with the kids who have crossed the border and are being detained is strong. Though the vast majority of children and teens at Mighty Writers El Futuro were born in the U.S., many of them have family members who have varied immigration experiences and statuses.

“The sentiment is still there that they want to help and I think one of our students put it best: ‘You know, I don’t see why we shouldn’t behave like we’re all family because my family has been in a very similar situation to your family, and because of that we’re bonded, so we need to help each other any way we can,’” Karp said.

Whitaker would like to see the size of the El Futuro program doubled because the demand and the kids are there, he said, noting that the waitlist at the El Futuro site has always been active and full almost from the beginning. And the surrounding neighborhood is itself supportive and welcoming, both he and Karp noted. 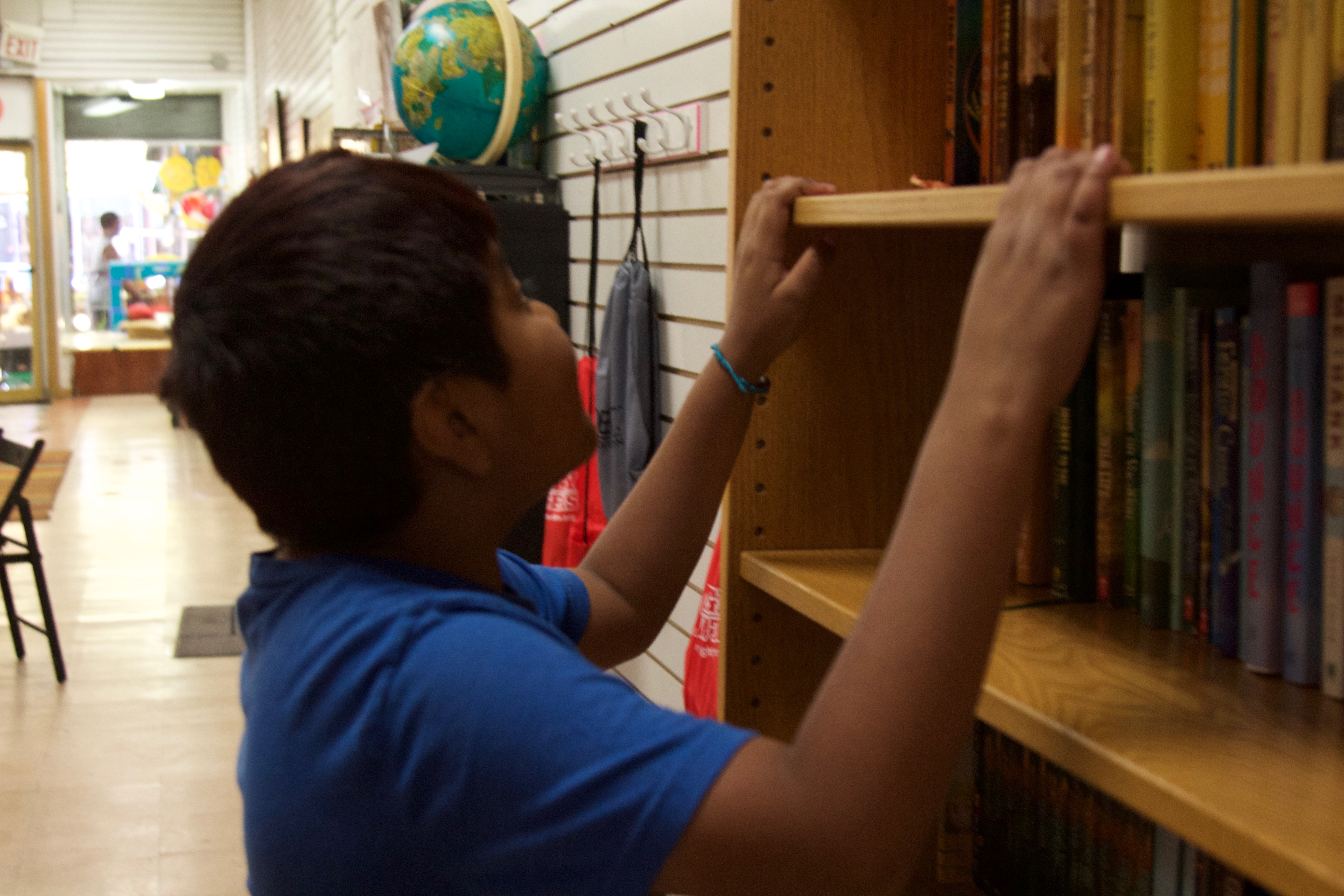 "I’ve lived in a couple of different cities, and I’ve lived in a couple of different neighborhoods even within Philadelphia, and this is the first place since I was a child where I have really felt like part of the neighborhood, where the people who live next door to you know your name, you know the name of the person who’s delivering your mail, and you say hello and you ask about their family," said Karp. "It feels like when people are having that fit of nostalgia that that’s what they want, that’s already here in this community, it's happening and it’s fantastic."

According to Karp, as the day winds down, Mighty Writers students will sometimes run up to her and ask to borrow a book. She always tells them that they may not borrow it — they have to keep it for themselves and take it with them wherever they would like.

It’s in line with Mighty Writers El Futuro strategy — changing the world with each book and student they send out the door, for years to come.