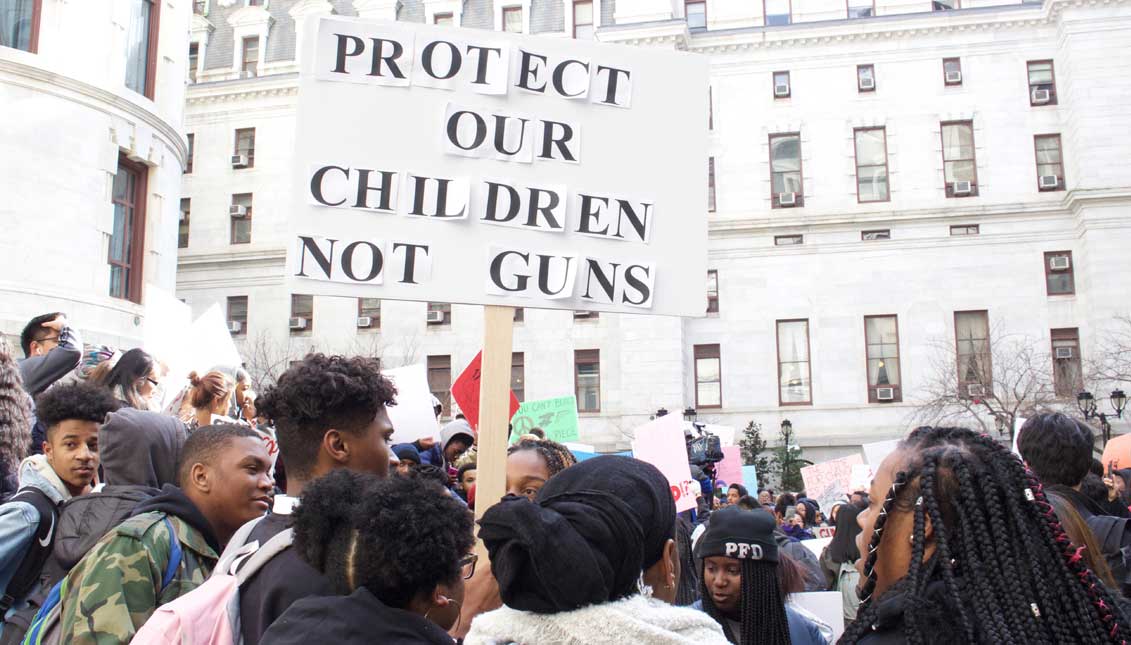 Walking out and speaking up for gun reform

Philadelphia students and school community members joined tens of thousands across the country in the National School Walkout demonstration.

On Wednesday morning, students, parents, educators, and representatives from schools across Philadelphia took to the streets to call for legislative action on gun reform.

City students participating in the National School Walkout Day exited their classes at 10 a.m. and observed 17 minutes of silence in memory of the 17 people killed at Marjory Stoneman Douglas High School in Parkland, Florida, a month ago to the day. Over 3,000 walkouts have been recorded throughout the country by Women’s March Youth EMPOWER, which organized the demonstration.

In Center City Philadelphia, students from different schools converged to march down Market and Broad streets, drawing a police escort as they halted traffic and continued on to City Hall, where they voiced their call to “protect our children, not guns,” as one marcher’s sign read.

“I’m here to support the students from Florida who experienced the tragic gun shooting. We need to make a change and in order to do that we need to take charge, and start going and making things happen since the government isn’t trying to do anything for us,” said Tiffani Turk, a twelfth grader at Academy at Palumbo.

“Seventeen kids just lost their lives over a kid who wanted to shoot up a school. I feel like you need stricter gun laws because people are getting killed over something so little,” said her classmate Shalisa Palmer, also a twelfth grader at Academy at Palumbo.

“If we get stricter laws, people’s lives will be saved. By this we’re making a stand showing that we care about our lives,” Palmer added. “We’re here for it.”

Sterling Thomas, an eleventh grader from Philadelphia Electrical and Technology Charter School who was participating in the demonstration at City Hall, agreed. His proposed solution to the issue of gun violence was simple.

Turk and Palmer said that they were protesting gun violence both in the context of school shootings and how it occurs throughout the city of Philadelphia.

After the national walkout gathering, the Student Vision for School Safety march, led by Juntos and the Philadelphia Student Union, called attention to what school safety means for all members of the city schools’ communities. Starting at the School District headquarters and ending at City Hall, participants advocated for the march platform’s six demands for improved school safety, including: divestment from school police officers; comprehensive mental and emotional health services; more guidance counselors and social workers; increased focus on restorative justice; protection for students and families from ICE arrests at or around school; and gun control that does not target black and brown people.

"In order to have truly safe schools, we need to recognize that having police officers and even potentially arming our teachers will not make us safer,” said Ivan Torres, Juntos member and 8th grader from Mastery Charter Thomas Campus, in a Juntos press release about the march. "For us to truly have safe schools we need to have more counselors instead of cops, we need to stop criminalizing young people when we get in trouble, we need our schools to be free from ICE, inside and out, and we need to ensure our schools feel like places of learning instead of like they prisons they do now.”