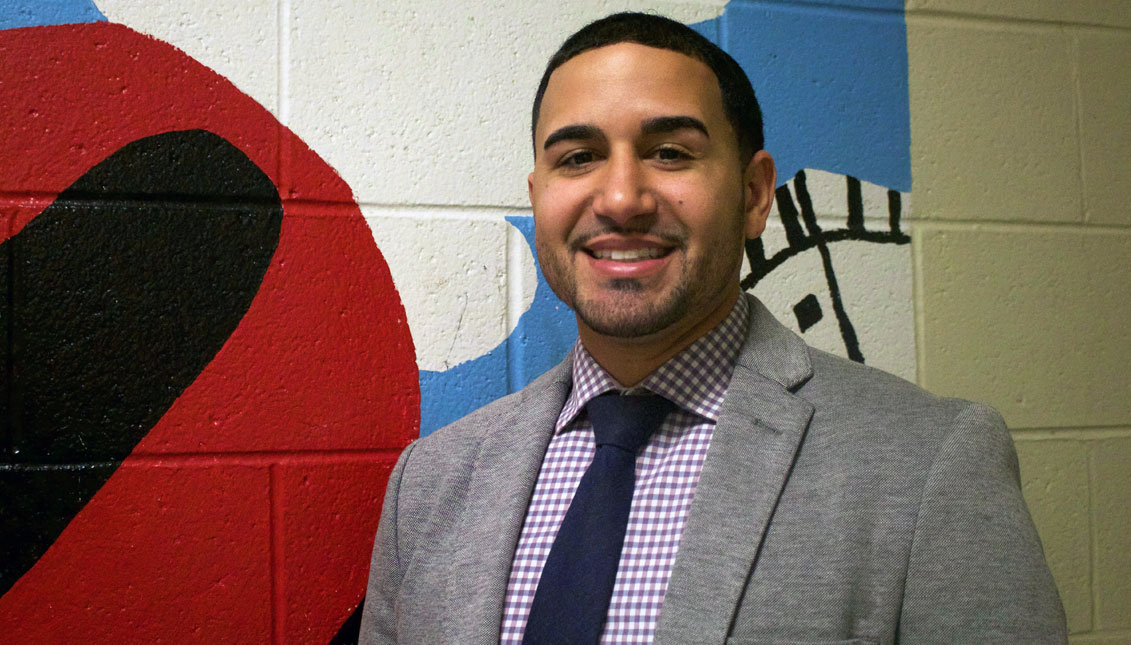 Antonio Romero’s space at Kensington Health Sciences Academy is a hub of activity, as his desk and area sits in the corner of the room where teachers, students, and staff come in and out, discussing lesson plans, events, and school activities. But, he admits, he rarely spends the full day in any one place - an aspect of his job as community school coordinator that was on full display one Monday morning the week of Thanksgiving.

Romero makes his way through the bustling hallways and pops into the cafeteria, where he chats with students in English and Spanish and calls a student’s parent to remind them about what to bring to the “Friendsgiving” event at the school the following day. He greets a group of the founders from 12PLUS, the non profit that is one of the many partner organizations that work with the school, on his way to speak to a class preparing for their health internships at St. Christopher’s Hospital as part of the health-related technology track the school offers.

Romero then moves to the gym to receive the monthly delivery of “Backpack Bites” and other produce from Philabundance. Later that afternoon, he is set to meet with a group of professors from Penn about an internship program started this past summer which invited KHSA students to participate as instructors in a course for graduate students who would start their time as student-teachers in the School District of Philadelphia in the fall.

It’s hectic and busy - and Romero loves it. He sees it all as part of a day’s work in the unique role he and 11 other coordinators have played in the 12 School District of Philadelphia elementary, middle, and high schools that were selected for the Mayor’s Office of Education community schools initiative which began three years ago, and which MOE Chief Education Officer Otis Hackney says is on track to add three schools next school year, with applications open until Dec. 14, and have 20 schools in the School District by 2022.

Romero has been deeply connected to Kensington for most of his life. As a child, he spent much time in the area, riding along with his father who drove a bus through the community. In this way, Romero recalled, he grew up getting to know the stories and value of each person he met there. Now, in addition to his work as the KHSA community schools coordinator, Romero said he is also ´very invested´ in the school and community in part because he lives in the school area.

“If I had kids that were turning 14, going into ninth grade, this would be their school. And that really drives home, because I want to be able to invest in my family’s future, my community’s future, and my background is in education and community development,” said Romero, who was a teacher for several years, and did community development work for another few years in North Philly.

Romero said the fact that he actually lives in the same neighborhood as the students - often walking or riding his bike to work, and seeing students at the supermarket or while walking around the block- is an important aspect of his position at the school. 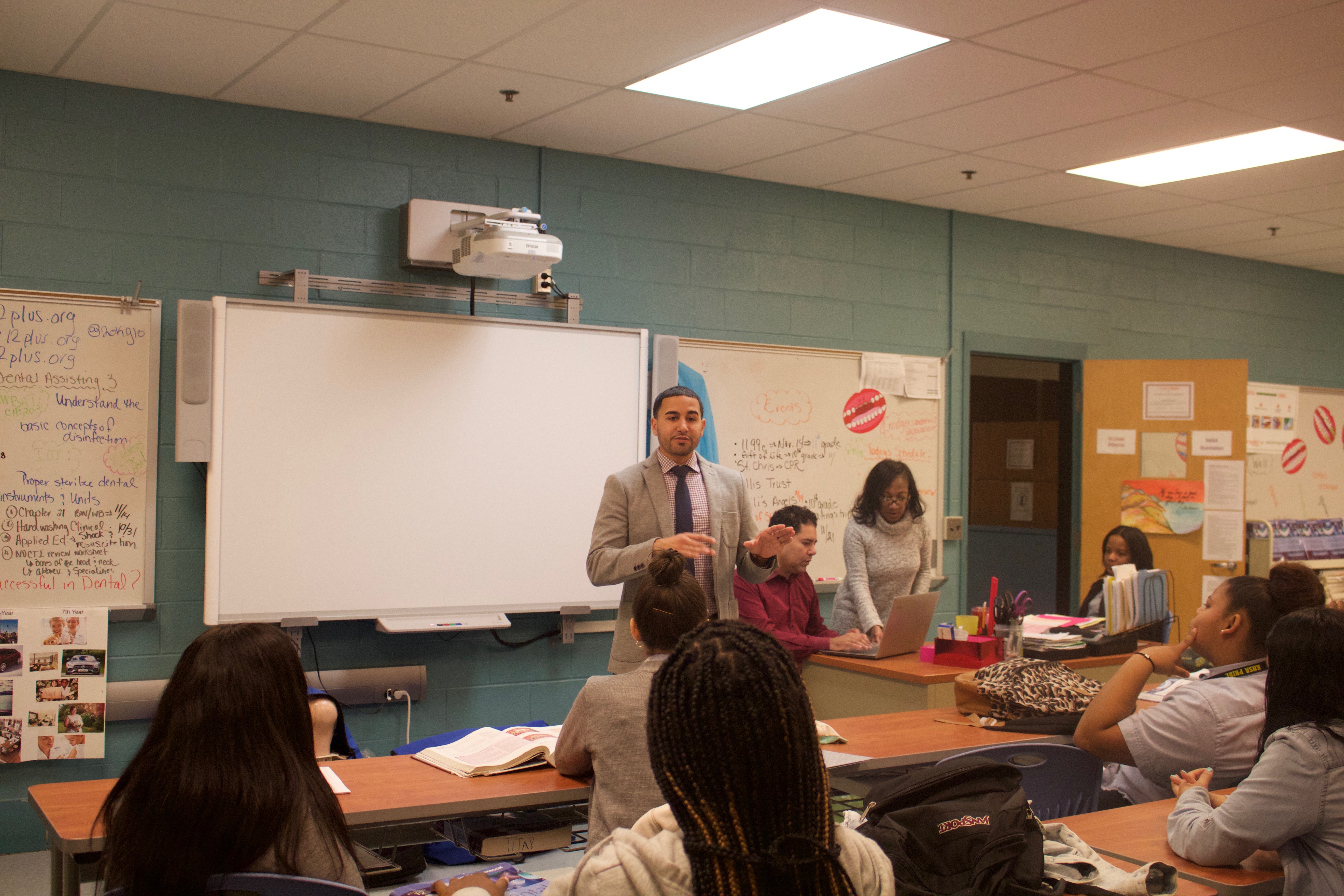 “I think it’s pretty transformative for students to be able to see people that are representing you and working with you and supporting you also with you,” Romero said, emphasizing that last preposition which he sees as fundamental in progress.

“We do things with each other - you can do things to someone or for someone, but the most impactful way is with,” he noted. “So everything I do...it’s with everyone else.”

Hackney said that most of the community school coordinators, like Romero, live in the schoolś community or close by, while some are alums of the same schools they are now working at.

¨Itś not something that is required but it is a tremendous bonus with those non-measurable things, those are the things that we measure every day about the impact that somebody like Antonio can have at that school is just well-worth it and we every fortunate to have him on board,” Hackney.

Romero said the assessments which all coordinators conducted in the first year of their jobs was vital to begin the process of seeking to draw in different community partners and work to align those interested in contributing to the schools with the schools’ needs as defined by students, parents, and teachers themselves.

Romero noted that lot of the needs in community schools are shared across the board, such as poverty, job training, and mental health needs.

As a coordinator, Romero plays an important role in code-switching and serving as a bridge between all stakeholders in the school community and outside partners.

“You’ve got to be like a jack of all trades - be able to speak at a boardroom, then in the streets, door to door, with our students,” said Romero.

It’s a lot to balance, admits Romero, but he prioritizes the work in concert with Principal Nimet Eren and the rest of the school administration, teachers, and staff by considering one question that they “constantly ask”: “Is this good for our students?”

“Any work that needs to get done, it needs to be moving the needle forward on a student need,” said Romero.

Romero said the fact that the school’s attendance has gone up “astronomically” within the past couple of years, a metric that Hackney cited as a major focus for community schools, has been a particularly important success, and is related to a higher level of engagement of students in clubs, extracurriculars, internships, and more.

“[In Kensington] we want to thrive. And in many ways we do thrive,” said Romero.

“What I see everyday is a community that is willing to work through things and see through a situation that others might perceive a certain way, but our community just going full course ahead and not letting any barrier stopping them from achieving.”