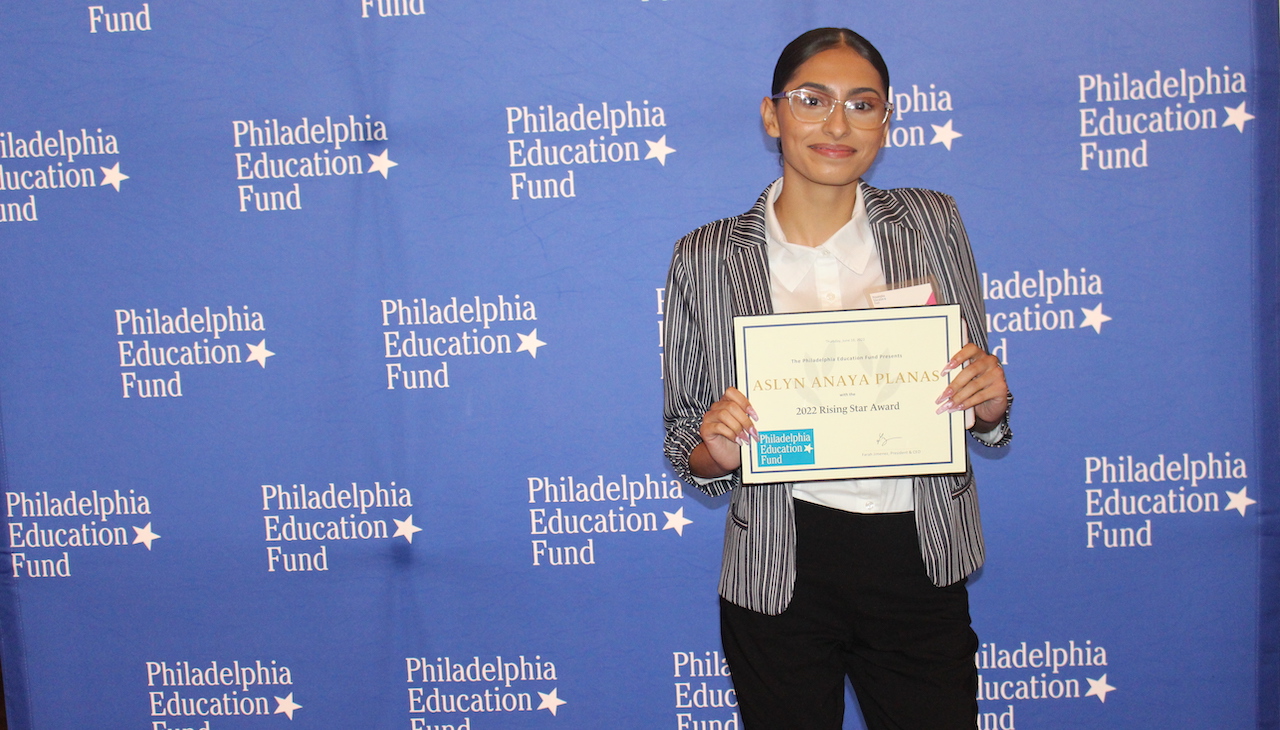 Aslyn Anaya Planas came from Puerto Rico to Philadelphia when she was just 2 years old. Now she is 18 years old and preparing to enter college. Photo: Jensen Toussaint/AL DÍA News.

Aslyn Anaya Planas and education as a door to the future

In honor of her efforts and academic excellence, Aslyn was chosen by the Philadelphia Education Fund to receive the Rising Star Award

Aslyn Anaya Planas came to Philadelphia when she was just two years old. Although she has few memories of her native island, no one can tear her away from her Caribbean roots.

Now, Aslyn is an 18-year-old preparing to enter college. She was admitted to all the colleges she applied, settling on Thomas Jefferson University in Philadelphia. She will begin her academic career in pre-med there, becoming the first generation in her family to pursue university studies.

In honor of her hard work and academic excellence, Aslyn was chosen by the Philadelphia Education Fund to receive the Rising Star Award, a scholarship that will help cover part of her college tuition.

“When I applied to college, it was hard trying to figure out how it all worked because my mom never went to college. She didn't know how to help me. I had to ask other people. It was very difficult, but I'm excited!" Anaya Planas told AL DÍA during the official award ceremony, held last Thursday, June 16, at the Union League.

The mission of the scholarship is to create equal opportunities for outstanding students who show a balance between their academic life and their personal life. Its primary focus is low-income, Black, and first-generation college students.

“Aslyn is extremely hardworking and has managed to remain at the top of class, while juggling her responsibilities at home as well as at work. She is talented, caring, intuitive, dedicated, and focused on her pursuit, which is a rare and impressive quality in a high school student. Aslyn is truly a stand-out individual who will impress everyone she meets,” reads one of the recommendations that Anaya Planas received during her previous interviews with the jury of the Philadelphia Education Fund.

Since last September, Aslyn has been working full-time at a department store to help her mom and her three siblings get ahead. Currently, she is the only steady source of income in her home. The remaining money she saves to pay for her studies and make her dreams come true.

“Since I was little I have wanted to leave the area where I live with my family. There is a lot of drug violence and gun violence. My motivation is to be able to get my family out of there to get to a place where we are happy and safe," said Aslyn.

Although the young woman received two academic scholarships, she is still in need of an additional $5,000 to cover the total cost of tuition. Her plan is to continue applying for scholarships and work to finance her studies.

“For minorities like us, it's a little harder to be able to pay all of your college expenses. The same thing happens with scholarships, which usually have many experience and education requirements that make many people unable to apply or not accepted. I think that when you come from money, it helps much more when it comes to getting into a quality university,” she continued.

When asked about her future, Aslyn says she's sure she wants to be a medical doctor and possibly a gynecologist. However, she recognizes that the racial disparity that exists in the world of medicine has become an impediment for Spanish-speaking people, especially for Latina women.

The gap between how Latinas are portrayed, and the reality
December 15th, 2022
Philadelphia Education Fund promotes a discussion panel about educators’ needs
October 13th, 2022
School District of Philadelphia Superintendent share his vision for the new school year
September 1st, 2022

According to a study published by the Association of American Medical Colleges (AAMC), it will take 92 years to correct the lack of Hispanic physician in the United States. The study was based on the demographics of the U.S. population compared to the U.S. physician workforce between 2010 and 2015.

“Being Latina and a woman is an impediment because you don't see many women of color in medicine. In addition to the fact that being Latina is more difficult since they do not give us the same treatment in medicine. I want to change that," Aslyn added.

To provide better access to health care, the study recommends increasing the number of university applications and student enrollment in medical schools. The catch up time would also be shorter if the number of Black and Hispanic medical students tripled or quadrupled. If multiplied by four, the time it would take drops from 92 to about 30 years or less for both groups.

“Racial and ethnic diversity among health professionals promotes better access to health care, improves health care quality for underserved populations, and better meets the health care needs of our increasingly diverse population. If the goal is to achieve a diverse and representative physician workforce within our lifetimes, a sustained and multifaceted approach must be implemented that will address both the size of the underrepresented medical school applicant pool as well as the number of underrepresented medical students and postgraduate trainees,” the AAMC recommends in its study. .

In 2015, there were an average of 20,349 allopathic medical school matriculants and 961,098 practicing physicians of all races and ethnicities. Of those, only 1,232 were Hispanic medical students and 60,549 physicians. Based on the population-level representation of Hispanics, the researchers expected 174,307 Hispanic physicians, leaving a shortfall of 113,758 Hispanic physicians.

The study, entitled “The national deficit of Black and Hispanic physicians in the U.S. and Projected Estimates of Time to Correction,” was published on June 1, 2022. The research was conducted by: Héctor Mora, MD; Adetokunbo Abayemi, MD; Kevin Holcomb, MD, and Maurice Hinson, MD.