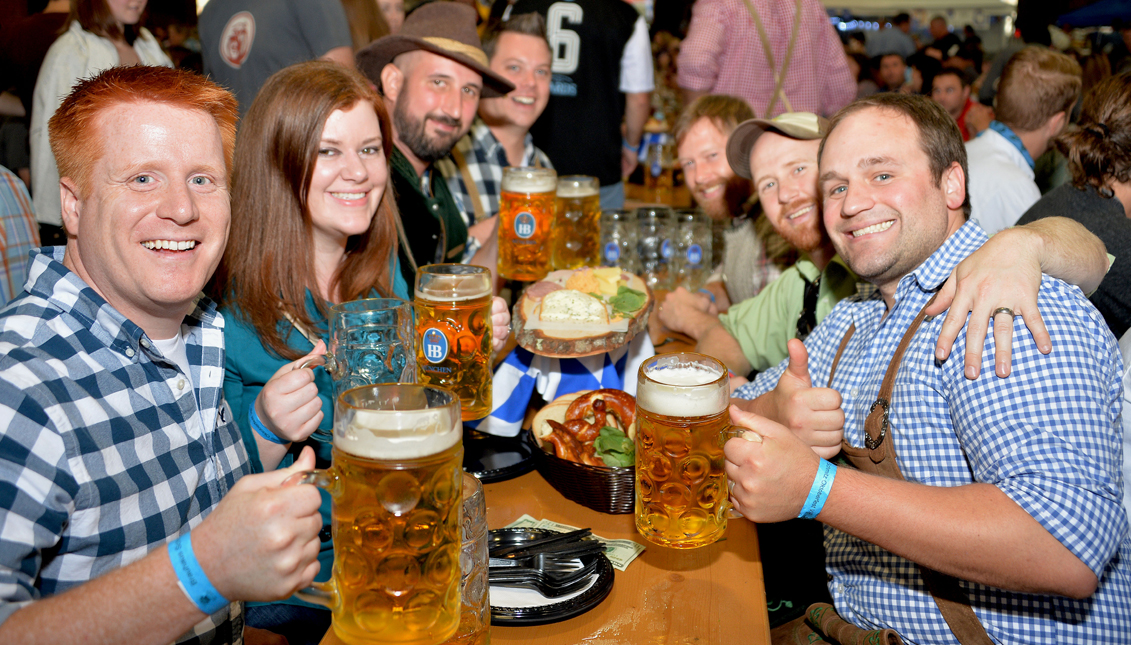 Oktoberfest in Philly: the comeback of the brewer City

All the options you need to enjoy the German tradition in our city.

All the options you need to enjoy the German tradition in our city.

It is well known that beer is one of the most preferred drinks around the world. Cold or hot, in bottle or in can, this product of fermentation has become the common companionship in most cultural scenarios. Dating back to the early Neolithic, it is assumed that beer was originated in the Middle East and the Chinese mastered the alcoholic fermentation earlier through rice.

During the early Middle Age, the Abbots improved the process of production, not only in breeding and planting, but as well in the perfection of brewing. Before the Industrial Revolution, the brewing process was more domestic and less homogeneous, but after the development of thermometers and hydrometers, everything became more controlled.

But it was at the beginning of the 19th century when, during the celebration of the marriage between King Ludwig I and Princess Therese of Saxe-Hildburghausen, the first Beer Festival took place, in Bavaria, Munich. On October 12, 1810, the citizens of Munich attended the festivities in the fields in front of the city gates named Theresienwiese, nowadays simply known as Wiesn, where the celebration was carried out around horse races.

The tradition mutated over the years with the addition of several demonstrations of local agriculture. This way, by 1850 the Festival had become an annual event and counted on different parades, competitions and stands. By the end of the century the brewers already had their halls and the celebration center is around the beer.

The Oktoberfest nowadays hosts more than 6 million people and more than 7 million litters of beer are served.

2016 promises to be an explosive year for the Oktoberfest in Philadelphia. More than 20 different options are in store; gardens, rooftops, terraces and much more are the scenarios for this year’s Beer Festival. And it was no wonder, since Philadelphia possesses a very important brewer trajectory, even when it has declined in the last decades.

During the closure of the 17th century, the biggest part of the beer produced in Philly was domestic, but its product came from the mixture of molasses and sassafras. It was since 1685 that William Frampton built the first brewery and tavern in the Southwest, in the corner in front of Front and Walnut, which kept going under several changes until 1709.

2016 promises to be an explosive year for the Oktoberfest in Philadelphia. More than 20 different options are in store

For September 1787 the celebration of the domestic beer was public after the Day of the Constitution parade. Afterwards, Brewerytown offered the perfect location for the production of beer, supplying the whole city in 1900. Bergner & Engel, Louis Bergdoll and Trupert Ortlieb were pioneers in the local brewery, until the cease of production in 1918, before World War I. During the Prohibition, the contraband made de most of the situation and the city kept the beer flow in a smaller level, until 1933 when the sing in the rooftop of Poth’s brewery announced “the beer (was) back”.

With such a brewer tradition, Philadelphia still needed its own Oktoberfest and the Breauhaus Schmitz accepted the challenge. They’ve decided to propel the annual festival in the South Street with the transformation of the 23rd Street Armory in the City Center in a Munich traditional festival, between the 7th and the 9th. From decorations and food to traditional dresses and big jars of lager beer, accompanied with the best music, to give Philly the final touch.

With such a brewer tradition, Philadelphia still needed its own Oktoberfest and the Breauhaus Schmitz accepted the challenge.

This brewer tradition revival comes with many other options. So, the Fall Fest In Morgan’s Pier will transform the Delaware River mole for a month, between September 23rd and October 29th every weekend, in a non-stop party among pumpkin carving contests, Halloween party and more.

On his side, the King of Prussia beerfest Royale will transform the parking lot of the Mall into a brewer fest, with more than a hundred different beers from fifty different national and international brewer houses. Food, music and a smoking lounge will be part of the show.

Simultaneously, the Victory Brewing Company is planning its own Oktoberfest for Saturday the 8th, on its first edition, inviting everyone to the degustation of Festbier and Zeltbier, Helles Lager, Prima Pils and seveal Headwaters. The entrance is free, paying on every stand, including traditional food. And while we’re talking about games and contests, the Oktoberfest Live! In the Xfinity Live! Is also an option the same day.

By the half of the month, the party still goes on, this time in the Dilworth Park between the 12th and the 16th, beginning on Wednesday at the end of the day in the Saultoberfest Beer Garden. On Saturday and Sunday the festival will have live music to entertain the day.

Finally, the Bloktoberfest in the Graduate Hopital and the Conshohocken Beer Festival in the A.A. Garthwaite Stadium during the 15th, are good options too for the craft beer tasting, food and live music, as well as the Memphis Tamproon Thirstoberfest and the Pumpkin Beer Festival in The Institute, as different options to try something new, like the pumpkin beer.

The Oktoberfest has migrated around the world thanks to the immigration and has been organized by Germans or their descendants. The biggest one is held in Canada, and it usually includes food and other German traditions.

In the last few years the fame of Oktoberfest has reached the Latin American countries, with the emergence of the craft beer and the development of local breweries, managing to emulate the German Festival in different locations.

Known as one of the biggest Oktoberfest in Latin America, Villa General Belgrano hosts the National Beer Fest since 1963, gathering more than 100 000 people around the beer culture. Villa General is a small town in Córdoba, and Germans founded it in the 1930s following the Alpine aesthetics – wooden houses and red roofs. The festival holds a Park called Parque Cevecero (Brewer Park) and it keeps up with the parades tradition.

Considered the biggest Oktoberfest in the Americas along with the Kitchener – Waterloo Oktoberfest, this Festival takes place in the city of Blumenau, Santa Catarina, Brazil, a town founded by Germans in 1850. It was set in motion after a big flooding of the Itajaí-Açu River in 1984, as a strategy to impulse the economy of the zone and the morale of the people. It’s hosted in the Parque Vila Germânica in the Bairro da Velha, during 17 days. It expects around 400 000 people every year.

This city holds the most important German immigration in Colombia’s history. Leo S. Kopp, a German immigrant, founded the Bavarian Brewery in 1889 an industry that produces national beers like Águila and Costeña. This enterprise promoted several different festivals around the country, especially after it became the second biggest brewery in Latin America.

Venezuela has a famous tradition of brewing, holding one of the biggest enterprises in Latin American history: Empresas Polar. Since the 1970s La Colonia Tovar (a town founded in 1843 by a group of immigrants from the then independent state of the Grand Duchy of Baden) hosts the Beer Festival in its Historic center, that has a population of 10 000 inhabitants and that receives twice of visitors during the celebration. There is a simultaneous celebration in the suburb of El Hatillo, organized by the German embassy.

Los Ríos is a province embraced by one of the biggest rivers of Chile and it has one of the biggest lakes in the area: Lago Ranco. This zone holds a festival with blues music and craft beer. It takes place on February, emulating the autumn in the opposite hemisphere.

Valdivia is a city situated as well in the province of Los Ríos. Founded by Pedro de Valdivia, the town received important German immigration during the second half of the 19th century. Torobayo is a village nearby Valdivia where most of the immigrants settled and founded enterprises like the Kunstmann Brewery, which produces craft beer now known around the world. Valdivia is a must for beer lovers.

Organized in the Capital, the Bierfest is a small event that takes place during the summer, with the aim of promoting local craft beer through a Gastronomic and Brewer Festival. The Bierfest counts with seven editions, hosting more than 35 brewing houses and 150 different styles of beer.

This year between the 13th and the 16th October, a new design in Beer Festivals will take place in México City. Outdoors terraces with gardens and big tables will be the scenario for the degustation of craft beer and traditional German food.

It takes place since 2008 from October 14th until the 16th and it has become one of the most important festivals in Latin America. Boosted by the Minerva Brewery for the promotion of craft beer culture, the Guadalajara Beer Festival expects more than 30 000 people on his 2016 edition that will take place in the Bosque de la Primavera. Brewing families like Grupo Modelo, Minerva, Calavera, Tempus, Erdinger and Paulaner are expected to be there.