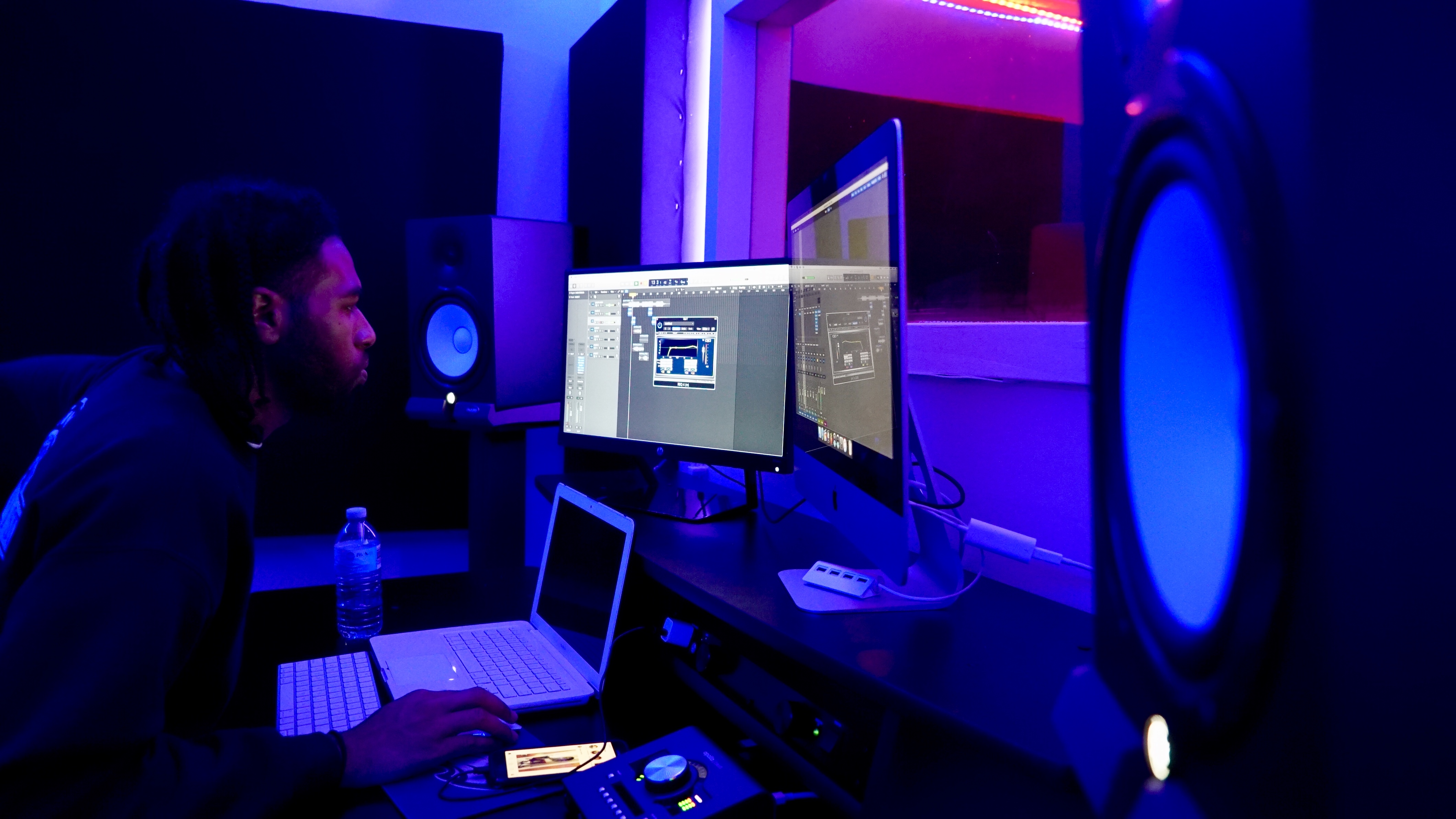 Three Latino entrepreneurs and artists are laying down beats and making waves at their start-up Studio 79, which they launched in July.

“Every time I step foot in here, it’s like my mind opens,” said David Martinez, looking around at the low-lit room, his elaborate, striking digital paintings hanging on the wall in the corner and the gleam of the audio engineering and sound system equipment behind him.

As he sat on a couch at Studio 79, the recording studio which he and two other entrepreneurs opened in June in the Lawndale neighborhood in Northeast Philadelphia, Martinez explained the significance of having a central space for creation.

“If you were ever to speak to an artist, they will tell you that the most intimidating thing is the blank canvas. Blank page, blank canvas, just starting,” he said. “But since I’ve been around so many creative people, just their words, people just rapping or singing inside the booth, it just opens me up because it’s a place where I came here for that.”

Martinez — partner in Studio 79, graphic designer, illustrator, and tattoo artist apprentice — has just come to the studio from his part-time job at a major communication services company. Eric Soler, Jr., partner, videographer, and rapper, is also there — he usually comes to the studio after 11-12 hour days as a sales manager. But when they walk in the door of their recording studio, they leave behind the pressures of the corporate world and enter their space to create — the space they say they carved out for themselves and other artists thanks to sheer determination, hard work, and faith and trust in one another.

Martinez, Soler, and Steve Barrientos, a well-known DJ in the region who is also co-owner of the studio, first met each other five years ago while in college. Though they each attended different schools — Soler went to Indiana University of Pennsylvania, Martinez to Penn State - Main Campus, and Barrientos to East Stroudsburg University in the Poconos  — they were part of the tightly-knit community of Lambda Sigma Upsilon, a Latino fraternity that has almost 2,000 members nationwide. Its founding date of 1979 inspired the name of their studio and a line of future associated businesses the entrepreneurs hope to open as they grow their start-up. 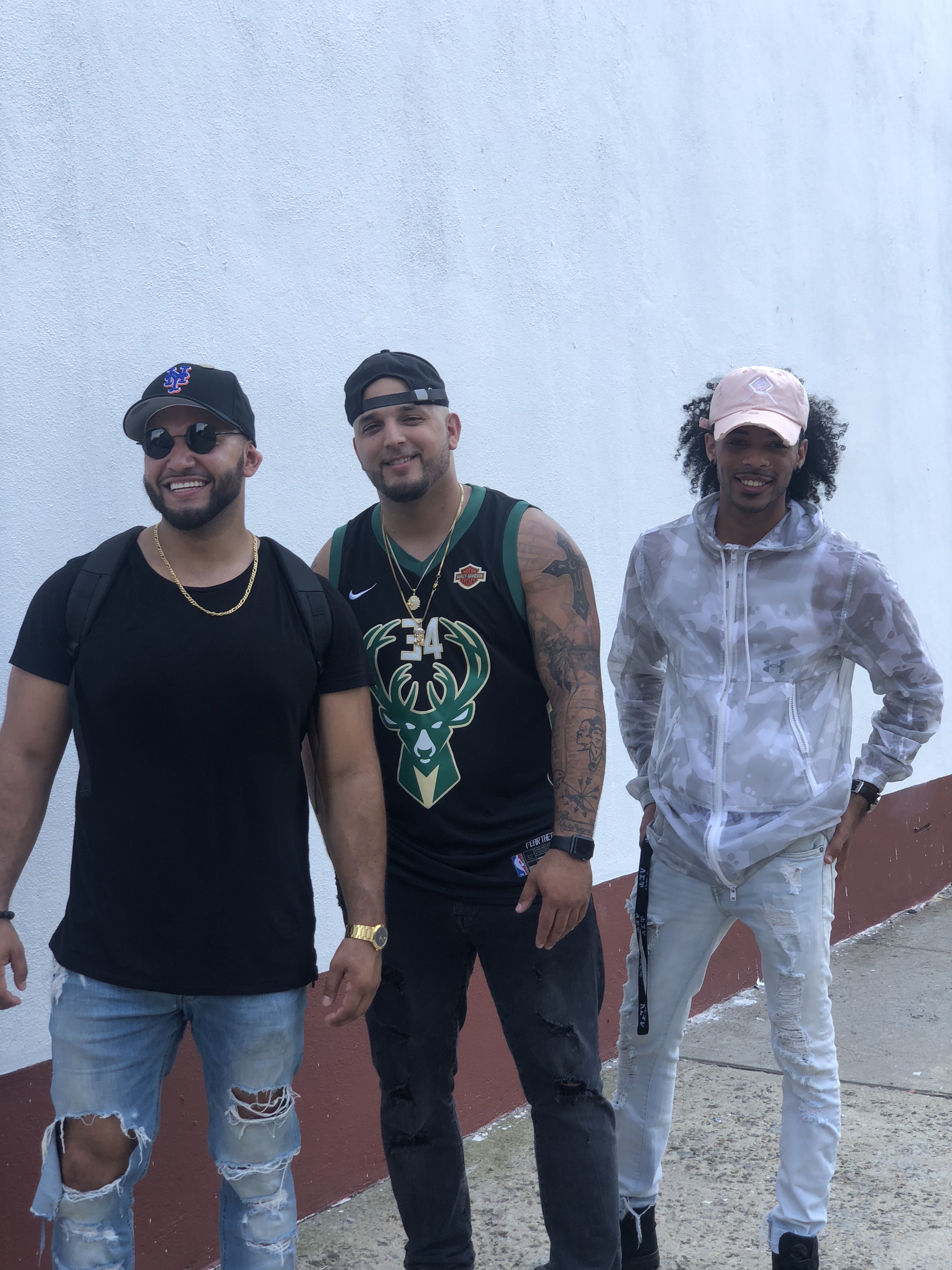 Since opening in July, Studio 79 immediately started attracting a loyal clientele, and now averages about 15 clients a month, many of whom have returned multiple times after their first recording session. Soler attributes the draw to the fact that they provide feedback and input during the creative process, and their insistence on maintaining a “drug-free zone” in the studio.

“We’re a positive environment, we give you a safe environment that when you come in here, the only thing you have to worry about is your music,” said Soler.

When Martinez joined as a partner in the business soon after it opened, offering his graphic design skills for clients’ promotional materials and album cover art, Soler said that, to his knowledge, Studio 79 became the only recording studio in Philadelphia “actually offering all media platforms in one room.”

“There are so many artists out there who are just underground, unsigned, and just don’t have an avenue to really do what they want to do,” said Soler. “We’re trying to create that avenue for them,” he added, noting that he believes Studio 79 is also the only Latino-owned recording studio in the city.

So far most of the artists recording at Studio 79 work in the hip hop, R&B, rap, and reggae genres, but the owners said that they are open to recording everyone, including artists interested in podcasting, rock, or “even country,” said Soler.

“That’s the atmosphere that we’re creating here, people want to be engaged, want to be a part of what we’re doing, and I think that’s a big thing, especially if we’re going to thrive and succeed in whatever we’re doing,” said Manny McLeod, the studio’s audio engineer who joined the team during the summer.

Both Soler and Martinez hope in the near future to be able to focus on their individual creative work and grow the studio’s business full time, with the goal of eventually moving to a bigger studio space and opening up a tattoo shop and a lounge.

Though their business has grown quickly, the process hasn’t always been easy. The entrepreneurs have had to fight through internal obstacles of doubt and fear throughout the process.

“We had to really convince ourselves and really be on the same page to hold each other accountable that no matter what happens, we’re sticking through this,” Soler said. “And when you do that with a business start-up... that’s the best mindset to have.”

Martinez agreed that overcoming the doubt and fear that came from investing a lot in the success of a creative, entrepreneurial venture was difficult because of expectations he grew up with in a Dominican immigrant family about what he should do or could do in the United States.

“That is very challenging mentally, but once you get the ball rolling, and you’re seeing that the best stuff is at the other side of fear, you start to see good things flourish,” said Martinez.