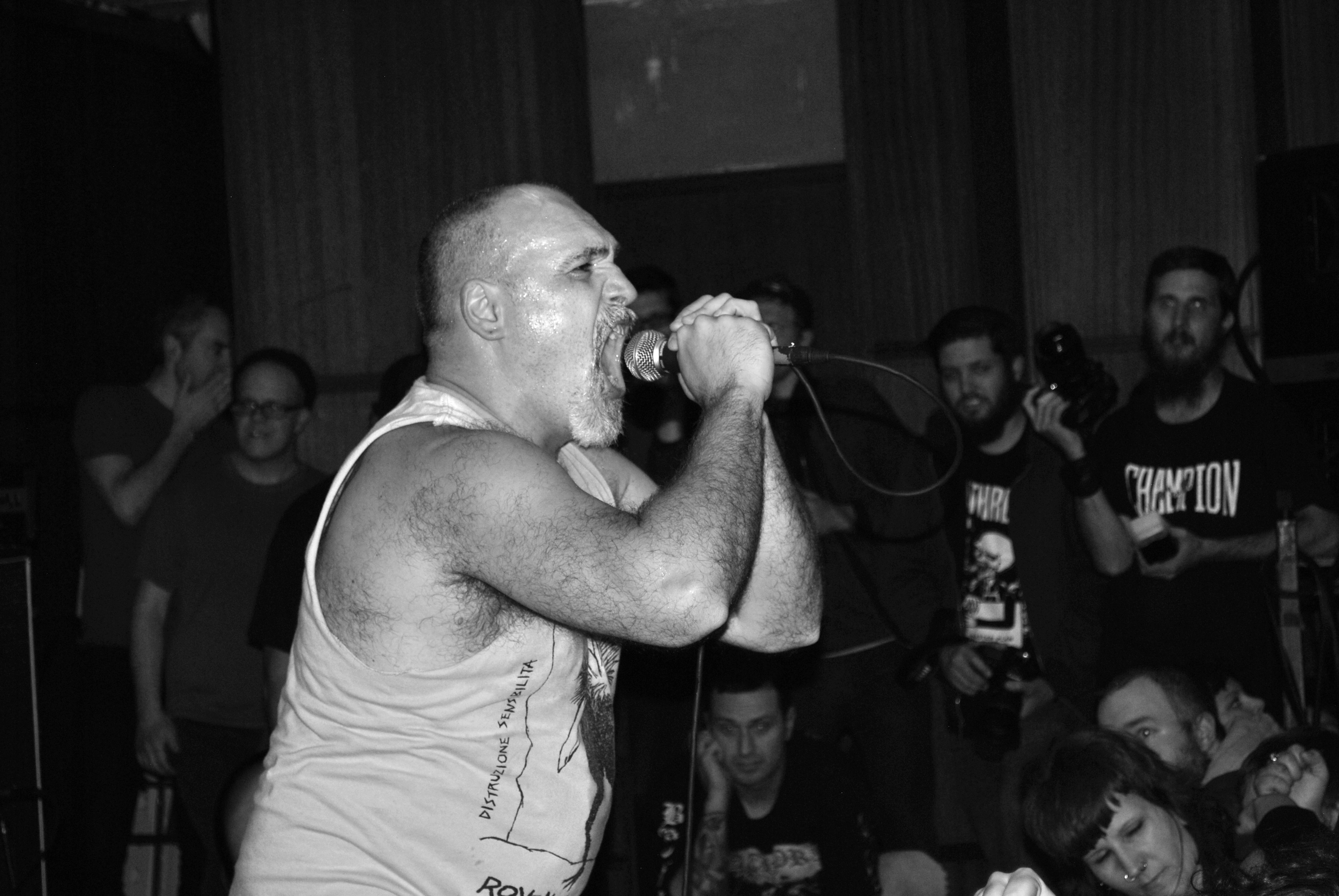 Imagine screaming so loud you don’t recognize the language.

Imagine screaming so loud you don’t recognize the language.

(I feel frustrated with the parents who don’t teach our language! Who raise their children with the shame of being Latino, and think themselves Americans!)

Yeah, hardcore music buries its lyrics to the casual listener, but lead singer Martin Sorrondeguy has never hid what Los Crudos is all about.

The all-Latino hardcore band that broke up in 1998 came to Philly Monday night as part of their limited reunion tour, drawing over 300 people to the basement of the First Unitarian Church.

Between 30-second-to-two-minute songs, Sorrondeguy, now in his 40s, paced across the stage giving bilingual speeches on everything from immigrant rights to queer identity. The crowd hollered back in Spanish and English. When he dedicated a song to all the immigrants in the room, someone yelled, “¡Todos los blancos aqui son immigrantes tambien!” (All the white people here are immigrants, too!)

Sorrondeguy founded Los Crudos in Chicago circa 1991. They built a cult following through the early 1990s, and are still  credited today for breaking down the wall for American Latinos in a predominately white music scene.

Almost all the lyrics are in Spanish. Throughout his career, Sorrondeguy has been trying to use music to reach out to endangered Latinos. The band’s early songs address issues facing Spanish-speaking minorities, especially those that grew up in violent inner-city neighborhoods. The 30-second power anthem “Sin Caras” (Without Faces) addresses the erasure of Latino narratives in America. The blast-beat “Asesinos” (Assassins) rages against warmongering politicians.

“That’s Right We’re That Spic Band” is exactly what it sounds like — Crudos’ middle finger to its haters. It was also the first song the band wrote in English, and before launching in, Sorrondeguy yelled that “Every f***ing non-Spanish speaker should be singing along!”

At one point the band’s fanbase teetered over queer issues. From the Church stage, Sorrondeguy talked about his own struggles of not just being a Latino on the punk scene, but also being gay. He said he used the kid who called other kids “f*ggot” all the time, and that it took him a long time to say it: “I love the f*** out of men.”

“Back in the day, people were talking like, we like Los Crudos but we don’t like that f*ggot s**t, and I said to them, motherf***er, then you never liked Los Crudos!”

The age range of the crowd ranged from teenagers to men and women in their 50s. Most of the younger enthusiasts had seen Limp Wrist, Sorrondeguy’s follow-up hardcore act, but the majority were seeing Los Crudos for the first time in their lives.

“I almost cried every time he gave a speech,” said Josh Sloan, who drove nine hours to Philly from North Carolina to see the show. He’d been listening to them since he was a kid, and couldn’t pass up the show.

José Ortiz Pagán, a Philadelphian originally from Puerto Rico, said the band helped define his life as a Latino on the punk scene.

Sorrondeguy is originally from Montevideo, Uruguay. And while Los Crudos carved a niche in the U.S., other Latino punk and hardcore scenes had been around in Spain, Chile, and Mexico since the very beginning.

“They were part of it, which is great it wasn’t only about one place, it was a network of distant friends you have,” Pagán said.

Is there one issue that inspires your music the most?

“It’s just life. I just go through life and think about things that maybe bug me. Sometimes in putting it out in a really dark way, sometimes I’ll do a humorous approach. But other times I do get dark. Life has those moments.”

Do you see a line between ethnicity and sexuality, or do you tend to view them as all part of “the other”?

“I’m the same person. What happens to the person who is African-American and queer? Or the Latina whose trans? You know we’re not boxes. We’re not dissected in that way. We can be many things. People tend to think of a Latino person as just this way, you eat rice, you do stupid s**t like that. No. We are everything. You’re an individual, right? So are we. So if I want to talk about queerness and I want to do it in Spanish and English, I’m going to do it.”

Was the transition into writing songs in English intentional?

“We did it intentionally. There were some Chicago punks — people who called themselves punks — who were talking s**t and referring to Los Crudos as a spic band. Then they’d be like ‘yeah, but Martin’s cool.’ It was just a weird comment and I thought it was hideous and it gave me fire to want to write a song. And ‘We’re That Spic Band’ was the first one I did in English.”

Is punk about defying stereotypes?

“I think part of it is. I don’t ever want to get into this conversation of what punk is what punk isn’t. We all know it varies. Punk means something different to you than it does to me. That’s the beauty of it. Nobody can claim its one thing or another.

Many of your fans in the audience commented on what an uplifting message you have. How do you keep punk and positive, especially now that you’re older?

“It’s part of who I am. I’m still excited by punk. I never walked away from it, actually. So for me, it’s not another box. It’s made me who I am.

“In a lot of these neighborhoods, punk actually saved our lives. If I would have followed the paths that were laid out for me as a young Latino male, I probably wouldn’t be alive right now. So for us to get into punk...Friends of mine whose parents were generational gang families, and when they got into punk their parents were happy. Their parents’ were happy, ‘you’re not going to f***ing end up in prison, you’re not going to f***ing end up dead.’ They were just like good. Be weird. Be f***ing weird. Be f***ing punk. So I stand by that. Punk has saved a lot of lives.”

So is this a reunion tour?

“This isn’t a reunion for me at all. This is the continuum.”

Check out Sorrondeguy’s documentary Beyond The Screams: A U.S. Latino Hardcore Punk Documentary: