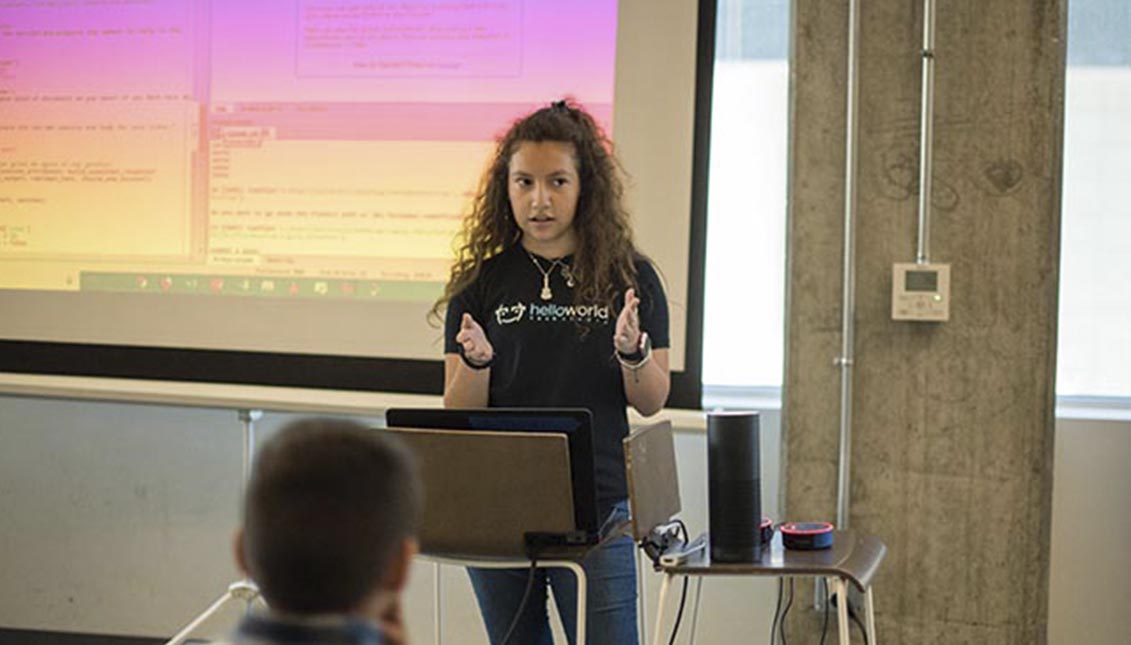 "I chose to work on this technology because I see my own friends and family who have questions and are struggling to make a living, and I thought maybe I should do something about it," Suguey Carmona. Via The74million.org

"Immigration Bonds" is an app that answers the questions of migrants in the United States. Its creator is only 14 years old.

Suguey Carmona discovered her passion for code when she was in the sixth grade, during a computer class at the school she attends in Austin, Texas, called KIPP Brave High School. Then she joined Hello Word, a computer science program based in Austin and San Francisco, and suddenly saw, with surprising clarity for a 14-year-old teenager, that programming languages—more universal than any language—could make a big difference for migrant families in her community, including her own.

This is how "Immigration Bonds" was born, a new app from Amazon's virtual assistant that answers in Spanish and English any questions that migrants in the United States may have about their rights, such as the time it takes to get a visa, or whether they can get a driver's license.

"I chose to work on this technology because I see my own friends and family who have questions and who are struggling to make a living, and I thought maybe I should do something about it," the Mexican-American teen told NBC News.

According to numerous studies, language barriers and lack of access to information are two obstacles many migrants traveling to the United States often encounter.

Suguey Carmona decided that the first step was to find out what the most urgent questions were for these people, asking them directly about how they sought employment, what issues they raised when obtaining their documents and what their biggest problems were.

Her biggest challenge was to create a space free of prejudice where users could use their language and find an easy and quick solution to their dilemmas.

She worked for a month struggling with Alexa's interface, which usually employs developers who have more than ten years of experience, starting over every time she encountered an obstacle and experimenting with various ways to present this new technology.

Was it going to be a children's game? A mobile application? In the end, she decided that "Immigration Bonds" would be a tool that would be downloaded directly from Alexa Skill for its simplicity, since "you don't need certain keywords to make it work."

"The problem with text boxes is that if you don't enter certain words or phrases in a certain way, they don't get read. That could make things very complicated for people who are trying to get an answer," she said.

The hours of work paid off. The Texas teenager developed a prototype and tested it with family and friends until she was able to make the necessary adjustments. And, bingo, once the Alexa user downloads the application, it answers any migration questions in Spanish or English, as Siri or any other type of virtual assistant would.

Sorenson introduces its Spanish option for ntouch mobile
May 17th, 2022
Hapi, the app that seeks to be the "Robinhood" of Latam
April 13th, 2022
The ‘Aware’ app seeks to protect women in Puerto Rico
April 12th, 2022

In addition, it takes into account the user's geographic location, as migration laws differ from state to state.

According to a study conducted by the Pew Research Center, only 7% of Latinos are engaged in the areas of science, technology, engineering, and mathematics, often referred to as STEM.

At a company like Google, last year only 1.4% of their new hires were Latino women and 4% were Latino, despite the company having launched programs and scholarships to close the technology gap and invite more Latino and African-American students to join the computer science ship.

That the Latino and the Black community is underrepresented in the technology sector is a fact, as are the failures of the public education system that widen the technology and class gap. Nevertheless, these pioneering programs in coding and stories like Suguey Carmona's show us that the new generations have all the tools in hand to turn the tables.