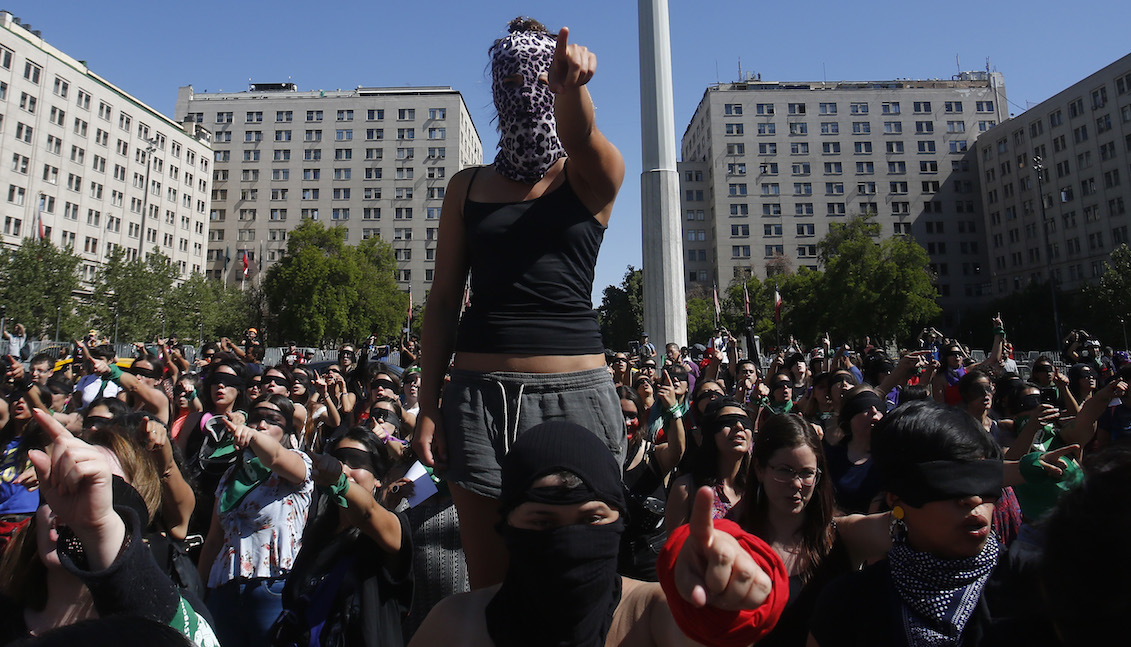 "The rapist was you; you are the rapist," is the chorus that hundreds of women have repeated in recent days, as part of a Chilean performance that is going…

"It's a bit difficult to describe. It fills you with strength, boldness, firmness, love, courage," says Luisa María Zorrilla, one of the hundreds of women who have taken part in the performance of the Chilean collective Las Tesis.

Imagine passing through a square, a park or the stairs of a large building and finding dozens of women gathered together, blindfolded, expressing absolute determination. After a moment of silence, a bass drum begins to mark the rhythm with which they are going to sing.

The patriarchy is a judge

who judges us for being born,

is the violence you don't see.

Patriarchy is a judge

who judges us for being born,

is the violence you already see.

Impunity for my killer.

And it wasn't my fault, or where I was or how I dressed.

You were the rapist.

You are the rapist.

This performance was designed by Dafne Valdés, Paula Cometa, Sibila Sotomayor and Lea Cáceres, who make up Las Tesis. Their goal was to bring the thesis of feminism, especially the Argentine anthropologist Rita Segato, to the performance level.

The other idea, equally shocking, is that when a crime is committed against a man it tends to be seen as a crime against humanity as a whole, while crimes against women are usually interpreted as crimes related to intimacy, eroticism, and for that reason, they are "minor crimes," and singular. They are seen as things that happen in small isolated spaces, which is false.

The bands in the eyes seem to take away women's fear of social evaluation, of submitting to the glances and judgments of others [...].

"The blindfolds over their eyes seem to take away women's fear of social evaluation, of submitting to the glances and judgments of others [...]," recalls Luisa Maria who participated in Bogotá on Nov. 30, where they carried signs with the names of 238 women who have been murdered in Colombia this year. "Seeing the names of so many who have been assaulted and violated does not cease to produce a sensation of repudiation and contempt for all those attitudes that legitimize those who have taken away our dignity at one time or another.

"Un violador en tu camino" has been replicated in Santiago de Chile, Paris, Bogotá, Medellín, Madrid, Barcelona, Berlin, and Mexico City. The multitude of women confronting the public contradicts the idea that the victim is alone and isolated and the way she holds the State, the police and individuals accountable shows forms of direct and structural violence, while the stanzas "and the guilt was not mine, nor where I was nor how I dressed" point to elements of cultural violence against women.

Unfortunately, gender-based violence is far from being an isolated event, limited to a few private areas. Nor is it confined by geographical or population barriers.

This type of performance brings women together, breaks the isolation that victims of gender violence must contend with, and makes visible a problem that, far from being isolated and individual aggression, affects the whole of humankind.