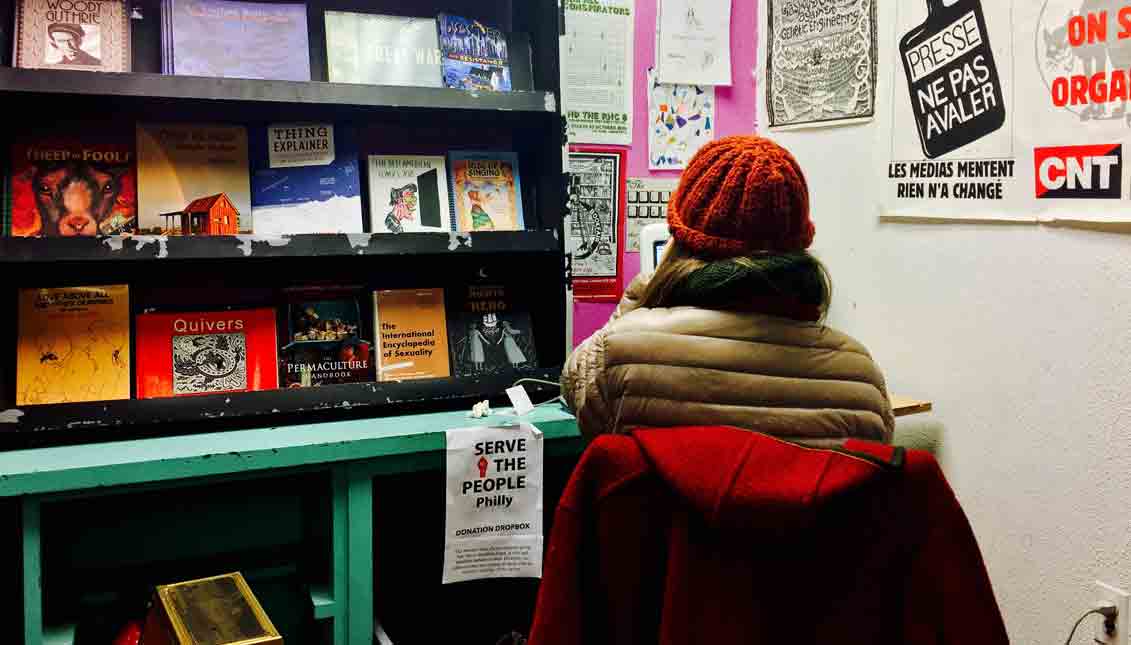 Wooden Shoe is a library that contains an atmosphere different from other establishments dedicated to the sale of books, here the approach is collaborative and political. The bookstore is located at 704 South Street. Photo: Mónica Marie Zorrilla.

Philly Grows Into Its Anarchist Shoe

Past a chalkboard that says, “Come inside to read a good book,” on one side and “Don’t be an asshole!” on the other, you come across a tattered SEPTA Union…

Exclusively and collectively run by a group of politically liberal and socially conscious volunteers, Wooden Shoe Books & Records has been radicalizing the Philadelphia independent bookstore scene since 1976. Tucked into 7th and South Street, The Shoe has so much more in stock than literature expounding its anarchist values.

Making sure to include curious young’uns and punk parents, The Shoe’s Teen and Children’s sections are stacked with copies that illustrate visions of World War III, Being Jazz: My Life as a Transgender Teen, I Am Malala, a c*** coloring book (their words, not mine), The Big Gay Alphabet, A is for Activist, a fifth-grade reading level account of The Trail of Tears, and for good measure, The Lorax by Dr. Seuss.

While The Shoe opposes and challenges capitalism, oppression, and unethical choices, it is also (ironically) a U.S. Government certified 501c3 non-profit organization. This means that, in order to ensure survival in the market and abidance to its core mission statement of being “an empowering resource for activism, organizing, art, self-education, community-building, and the anti-capitalist struggle,” The Shoe has managed to stuff its quirks inside of an approved mold of an NGO.

Beyond the Café Zapatista coffee beans sold to support schools in Mexican-Mayan Zapatista communities and olive oil made by a Palestinian Woman’s Cooperative, the “Cat’s Against Catcalling” t-shirts sold that support the Philadelphia feminist activist group Pussy Division, and the freely distributed Philadelphia Anarchist Periodical Anathema, the infoshop also volunteers its space and time to a plethora of organizations and speakers. Abiding to the principles of The Shoe, these organizations and speakers should “recognize their privilege, and are committed to discussing and challenging all systems of oppression including but not limited to: racism, sexism, classism, heterosexism, ableism, and ageism.” This manifests into events that include poetry readings, educational discussions, weekly club meetings in the basement, workshops, book-signings, and rock shows.

Barcelona prepares to celebrate Sant Jordi
April 16th, 2022
TikTok, a key ally for the sale of print books
January 31st, 2022
A Novel Idea on Passyunk is sharing its space with local artists and writers in Philly
January 31st, 2022

Most strikingly, the store’s tendency to lean away from capitalism allows its patrons to sit on the floors of its shop and read books without actually purchasing them, provides a computer for the public to use on their own time, and has a donation dropbox with the following statement attached to it: “The Wooden Shoe always supports giving free shit to the disenfranchised, at risk, and homeless persons in need.”

Recently, The Shoe held a talk given by local archivist and writer Matt N. Lyons who’s focus was on Anti-Fascism, debunking the “Alternative Right”, and exposing white nationalist supremacist groups. Lyons’ political address was so well attended that a source (choosing to remain anonymous) recalled that a handful of Philadelphia police began to vigilantly stand outside of the meager shop, due to a supposed fear of an incendiary protest breaking out.

So, who exactly decides to volunteer their precious time to running a store and representing a collective that pockets absolutely no private profit?

This past- and unusually warm- Saturday, John and David Otter were behind the register. In ripped black jeans with camouflage patches and chains, and a 1970s overgrown mop top decked with dangly crystal earrings (respectively), both men effusively spoke about their experience as volunteers at the collectively and democratically run entity. John explains that The Shoe approves its zany inventory from “organizations, radical groups, cooperatives, that are activisty types- like AK Press –that provide a political bent and a critical look.”

Otter chimes in, saying, “It [volunteering] can be fun. You get a 20% discount, it’s not that taxing, you get first picks on lectures and poetry readings; you can sell your zine or pamphlet…. But it’s also about believing in the greater picture of the desemination of knowledge, and the way that The Shoe gives value and a venue to the direction of anarchism and anti-fascism.”

Otter has just come from a month-long stint in a tent supporting the #NoDAPL movement with a group of Water Protectors and protestors that were “definitely not funded by George Soros,” he chuckles. “It was a productive time, but it also taught me that… See, The Shoe provides a space for radicalizing change locally. That may not be as glamorous as getting Trump impeached, or stopping trendy oil pipelines, but this [the community] is where the most change can be affected in this moment. It’s hard to remember that, while it’s cool to be all ‘David & Goliath’ with activism, it’s probably not the approach we should be taking.”